Flashback: Federer Lives To Fight Another Day At Wimbledon

Flashback: Federer Lives To Fight Another Day At Wimbledon

In his first match at The Championships since one of his greatest Wimbledon triumphs, Roger Federer narrowly avoided an opening day upset at Wimbledon in 2010.

Appearing at SW19 for the first time since beating Andy Roddick 16-14 in an extended fifth set to capture a record-breaking 15th Grand Slam title in 2009, Federer followed tournament tradition by opening Day One play on Centre Court against Alejandro Falla.

Meeting the Colombian for the third time in four weeks, Federer owned a perfect 11-0 set record against Falla, which included a 6-1, 6-2 victory en route to the NOVENTI OPEN final in Halle just two weeks earlier. All signs pointed to a comfortable opening match for Federer, but Falla started strongly to threaten Federer’s streak of 24 consecutive Grand Slam quarter-final appearances.

The World No. 60, who owned just three victories from five previous appearances at the All England Club, moved up the court in crucial moments to establish a two-set lead. After losing the third set, Falla secured an early break in the fourth set and maintained his advantage to serve for the match at 5-4. From this point, Federer raised his game to win nine of the next 10 games and earn a 5-7, 4-6, 6-4, 7-6(1), 6-0 victory after three hours and 18 minutes.

“It came as a bit of a shock and it’s not something I was that prepared for, but you have to draw from experience and physical strength. I live to fight another day,” said Federer.

Aiming to join Pete Sampras and William Renshaw as the only seven-time singles champions at the All England Club, Federer fell to eventual runner-up Tomas Berdych in the quarter-finals. But the Swiss soon joined Sampras and Renshaw with his seventh trophy at SW19 in 2012, before surpassing the duo with a record-breaking eighth crown in 2017.

“I am happy because I played a great match,” said Falla. “Today is a special day for me in tennis, even if I lost that match. I can say I was serving for the match against Federer. Many players would like to be in that situation.”

Two years later, Falla achieved his best Wimbledon result. The Colombian earned back-to-back five-set wins against John Isner and Nicolas Mahut to reach the third round. One month later, Falla returned to SW19 to face Federer in the first round of the 2012 London Olympics. The World No. 51 broke the eventual silver medallist on three occasions and forced a deciding set, before suffering a 6-3, 5-7, 6-3 defeat.

The BBC Scottish Symphony Orchestra serves up a divine racket on what should have been the first day of Wimbledon.

Editor’s Note: But for the COVID-19 pandemic, Wimbledon would now be underway. During the next two weeks, ATPTour.com will look back on memorable matches and happenings at the grass-court Grand Slam.

Grand Slam debuts don’t get much more memorable than this.

Ivo Karlovic, a 24-year-old qualifier ranked No. 203 in the FedEx ATP Rankings, strode out onto Centre Court at 1:00pm to face top seed and defending champion Lleyton Hewitt in their first-round 2003 Wimbledon match. Less than three hours later, Hewitt’s title reign ended as the Croatian scored a shocking 1-6, 7-6(5), 6-3, 6-4 upset.

Hewitt’s exit marked the first time in the Open Era that a defending men’s singles champion lost in the opening round at the All England Club. It only happened once before in the tournament’s 126-year history (Charlie Pasarell d. Manuel Santana, 1967). But for Karlovic, the result was perfectly logical once he got used to his surroundings.

“I saw him play last week and he didn’t play anything special. I was pretty prepared to win,” Karlovic said after the match. “The first set, I was completely scared. After I saw that I can beat him, I started to play better.”

Karlovic had just four tour-level wins to his name and only one victory over a Top 100 player. He nearly didn’t even make it to the main draw and was two points from losing his second-round qualifying match against Juan Pablo Guzman. But what he lacked in experience, the 6’11” Croatian made up for with a booming serve that stunned those in attendance.

He shook off a slow start, cut the double faults out of his game and started delivering rockets that the Aussie struggled to get a racquet on. When Hewitt managed to put his opponent’s serves back in play, it only took a few steps for the towering Karlovic to reach the net and knock off winning volleys.

Hewitt’s tactics were questionable as he frequently attempted to lob over Karlovic instead of hitting passing shots. Despite this, he reached set point with Karlovic serving at 4-5 in the second set, only to miss a playable return on his chance for a two-sets lead.

Once the Croatian survived that game, his slice approaches and surprising feel around the net added extra pressure to the Aussie’s service games as he comfortably took care of his own. Karlovic served out the match with ease and raised his arms in triumph.

”When I missed those opportunities early in the second set, his whole game sort of came together,” Hewitt said. ”He didn’t make as many easy mistakes.’’

Karlovic’s dream run ended in the third round to Max Mirnyi, but he made his Top 100 debut that September and has remained a perennial ATP Tour staple since then.

This year’s Murray Trophy in Glasgow has been postponed until 2021 due to the “congested international tournament calendar”.

BBC Sport looks back at two of the most impressive hotdog shots ever seen at Wimbledon and asks you to decide – who did it best?

The tournament would have started today. Here are some of the very British things we’ll miss.


Learn about the American’s on-court achievements, eating habits and more

Tommy Paul reached the Australian Open third round and is at a career-high No. 57 in the FedEx ATP Rankings.

ATPTour.com looks at five things you should know about the 23-year-old.

Paul won nine consecutive matches from the start of his title run in Sarasota through finishing runner-up in Tallahassee. The American owns four Challenger trophies, having also captured the Charlottesville title in 2018 with straight-sets wins against Ivo Karlovic, Bradley Klahn and Peter Polansky.

Paul opened the year with five straight-sets wins from qualifying to reach his maiden ATP Tour semi-final in Adelaide. The 6’1” right hander recorded wins against Leonardo Mayer and 2017 semi-finalist Grigor Dimitrov the next week in Melbourne to make his first appearance in the third round of a Grand Slam.

The American then earned his first Top 10 win against 2019 runner-up Alexander Zverev at ATP 500-level Acapulco. Paul saved all four break points he faced to defeat the World No. 7 in 88 minutes.

“[I just have to] continue to do the right things, try to stick with the same routines as I had at the end of last year and through the beginning of this year,” said Paul. “I’m still the same person, still having fun. Just trying to make better decisions.” 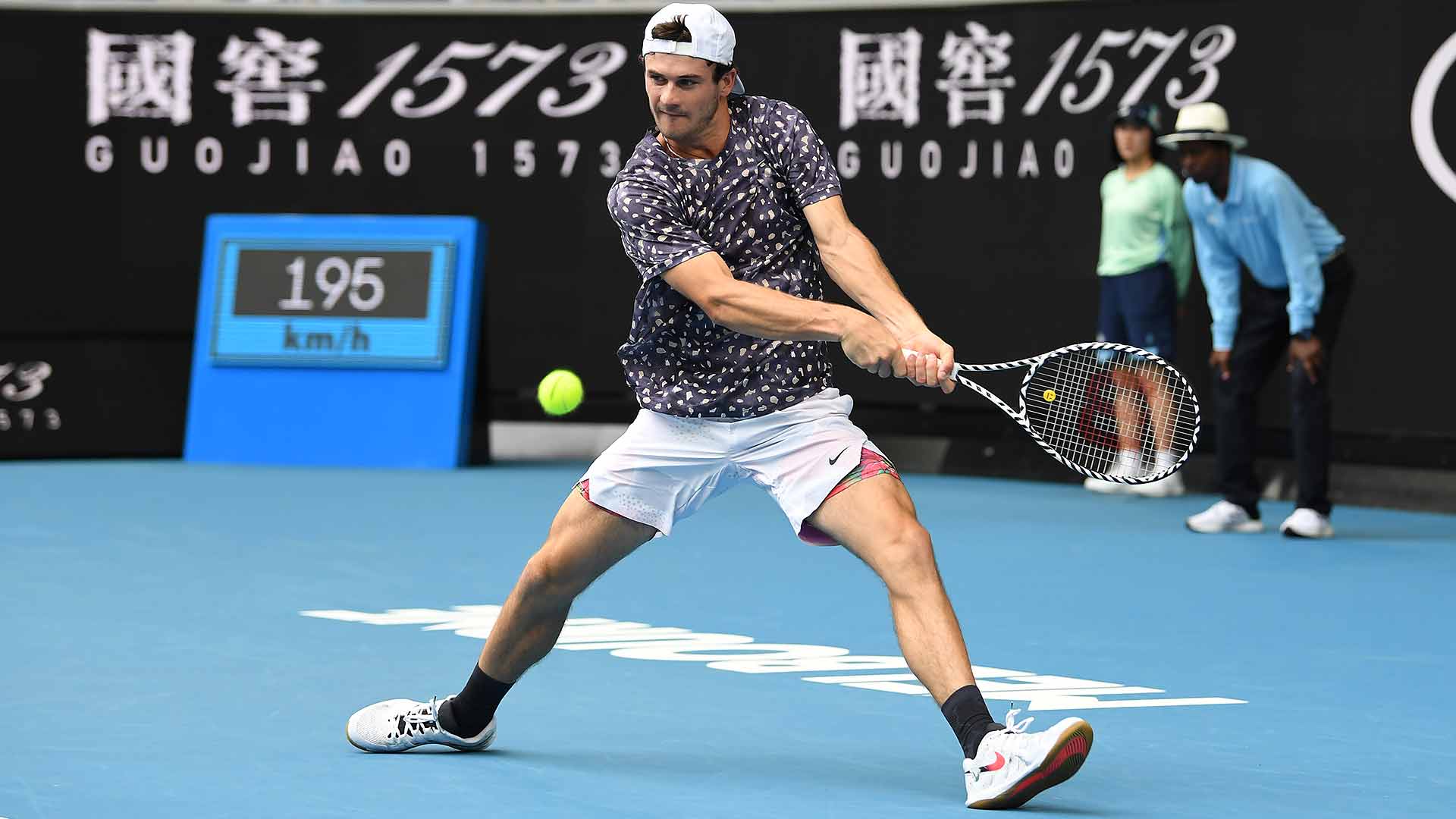 Tommy Paul reaches the third round of a Grand Slam for the first time on Wednesday at the Australian Open.” />

3) He Has An Experienced Coach In His Corner
Paul began working with Brad Stine near the end of the 2019 season. Stine has previously worked with former World No. 1 Jim Courier and two-time Grand Slam finalist Kevin Anderson. The former U.S. national coach spent the 2019 off-season with Paul and was impressed by the World No. 57’s professional approach.

”[The o]ff-season was phenomenal with him,” said Stine. “I was really impressed with his work ethic and attitude coming to the court every day.”

4) Fun Is Important
Introduced to the sport by his parents aged seven, Paul noticed he was having more fun on court than most players his age. On days where he lacked motivation, Paul made a conscious effort to prioritise fun on the court to keep his spirits high.

That same mindset remains to this day. The 2015 Roland Garros boys’ singles champion hopes his fun philosophy also provides fans in the stands with plenty of enjoyable moments.

“I want people to have fun watching me. I want them to see me having fun and I want them to enjoy watching it,” Paul said. “I don’t want to be a boring guy out on the court.”

5) A New City Means New Restaurants
Spending much of the year on the road, Paul loves to discover new restaurants during tournament weeks. During his title run at the Challenger event in New Haven last year, the Delray Beach resident visited Frank Pepe’s Pizzeria with fellow player Ryan Shane.

“Eating on the road is pretty much always eating out,” said Paul. “We try and find the best restaurants, restaurants that are famous in the area.”