Rafael Nadal triumphed at 2008 Roland Garros, only losing four games against Roger Federer in the final. The Spaniard quickly crossed the English Channel to compete at the Fever-Tree Championships the following week to pursue personal history. The 22-year-old entered the event without a grass-court trophy.

Nadal hadn’t advanced past the quarter-finals in his first two appearances at The Queen’s Club. Riding a 12-match winning streak, the Spaniard cruised past Jonas Bjorkman and overcame 18-year-old Kei Nishikori in three sets to reach his third straight quarter-final in West London.

Nadal then faced big-serving Croatian Ivo Karlovic. Neither player broke serve, so all three sets went to a tie-break. A double fault cost Nadal the opening set, but the two-time Wimbledon runner-up fired crucial forehand winners in the second and third-set tie-breaks to claim victory after two hours and 24 minutes. 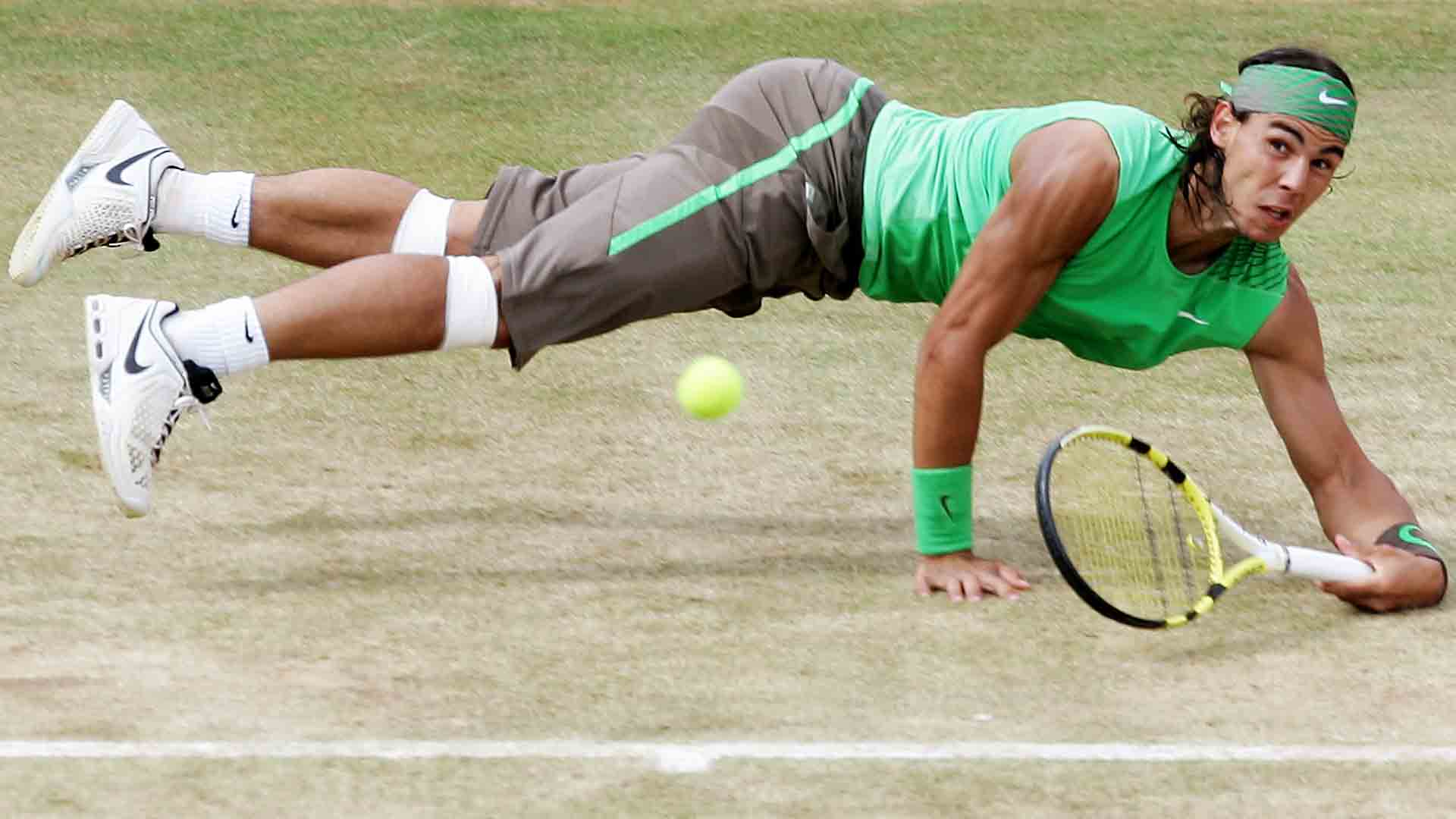 Rafael Nadal beat Novak Djokovic to win his first ATP Tour title on grass at The Queen’s Club in 2008.” />

Standing between Nadal and a spot in the championship match was four-time winner Andy Roddick. The stars were tied at 2-2 in their ATP Head2Head series, with Roddick winning their most recent encounter earlier that year in Dubai. But it was Nadal who played his best tennis in crucial moments, saving each of the four break points he faced and converting one against Roddick’s serve in each set to earn a 7-5, 6-4 win.

Bidding to win his first grass-court title, Nadal faced World No. 3 Novak Djokovic for the trophy. Djokovic entered the contest in peak form, having dropped a combined five games to beat four-time winner Lleyton Hewitt and David Nalbandian in the quarter-finals and semi-finals, respectively.

Nadal recovered from break point down at 0-3 in the first set and ripped a forehand winner to save set point at 5/6 in the first-set tie-break en route to taking the opener. The World No. 2 faced further pressure in the second set as Djokovic served to force a decider at 5-4. However, Nadal raised his level and soon won three straight games to capture his maiden grass-court ATP Tour title 7-6(6), 7-5.

After what he called an “amazing week” at The Queen’s Club, Nadal quickly set his sights on going one step further at Wimbledon. Federer had beaten the Spaniard in the championship match in 2006 and 2007.

“Wimbledon is a very, very important tournament and the motivation is 100 per cent,” said Nadal.

Three weeks later, in one of the greatest matches of all-time, Nadal dethroned five-time defending champion Federer 6-4, 6-4, 6-7(5), 6-7(8), 9-7 after four hours and 48 minutes to become Wimbledon champion for the first time. With the milestone victory, Nadal became the first man to complete the Queen’s Club-Wimbledon double since Lleyton Hewitt in 2002 and the sixth player since 1981 to achieve the feat.

The US Open can take place without fans from 31 August to 13 September, says governor of New York Andrew Cuomo.

ATPTour.com looks back at his 10 title runs at the ATP 500 event

Roger Federer made history on Sunday, winning his 10th Halle trophy with a 7-6(2), 6-1 victory against David Goffin to triumph at the NOVENTI OPEN.

The 37-year-old is only the second man in the Open Era to win at least 10 titles at a single tournament, joining Rafael Nadal, who has accomplished the feat at three different events (12 at Roland Garros, 11 at Monte-Carlo and Barcelona).

Federer now owns 68 wins in Halle, the sixth-most victories he has tallied at any tournament. This was his 13th final (10-3) at the ATP 500 tournament. ATPTour.com takes a look at his 10 victories in Halle…

2019 def. David Goffin 7-6(2), 6-1
Federer was fresh off of his first clay-court campaign since 2016. But the Swiss had no problem transitioning to the grass, battling through three-setters in two of his first three matches before sprinting away for his 10th title after a 7-6(2), 6-1 triumph against Goffin in the championship match.

The 37-year-old won 95 per cent of his service games during the week, and he did not lose his serve in the final against Goffin. Federer dominated with his first serve — winning 83 per cent of those points — and broke the Belgian three times in the second set to finish off his run to the title.

2017 def. Alexander Zverev 6-1, 6-3
Following his magical run to the 2017 Australian Open title after returning from injury, as well as trophies in Indian Wells and Miami that followed, Federer elected to skip the clay-court season for the first time. However, upon his return in Stuttgart, he lost in the first round, putting pressure on the Swiss to find his form in Halle.

Federer alleviated any concerns by winning his ninth title at the ATP 500 tournament, rolling through the field without dropping a set. In the final, he won 93 per cent of first-serve points in a straightforward victory against then-World No. 12 Alexander Zverev. Federer went on to capture his eighth Wimbledon title.

2015 def. Andreas Seppi 7-6(1), 6-4
Earlier in the 2015, Federer was upset by Andreas Seppi in the third round of the Australian Open, his earliest exit in Melbourne since 2001. But not only did the Swiss get his revenge in Indian Wells, he also defeated the Italian in straight sets in the Halle final.

His toughest test came in the first round, overcoming home favourite Philipp Kohlschreiber 7-6(8), 3-6, 7-6(5). That second set was the only set Federer dropped in the tournament.

2014 def. Alejandro Falla 7-6(2), 7-6(3)
Federer’s first tournament after suffering a surprising fourth-round loss at 2014 Roland Garros came in Halle. Although he lost his first set of the week against Joao Sousa, the Swiss won his next six sets to lift the trophy.

It proved to be good Wimbledon preparation for Federer, who lost only one set on his way to the final in London. But he ultimately fell short in a five-set thriller against Novak Djokovic.

2013 def. Mikhail Youzhny 6-7(5), 6-3, 6-4
Federer claimed his lone 6-0, 6-0 victory in 75 matches in Halle in the 2013 quarter-finals against Mischa Zverev. But from there it got tougher, needing three sets in both the semi-finals and final. Nevertheless, Federer prevailed, saving the two break points he faced to beat Mikhail Youzhny in the championship match. The title did not lead to Wimbledon success, though, as Federer lost in the second round to Sergiy Stakhovsky.

2008 def. Philipp Kohlschreiber 6-3, 6-4
The Swiss put on a serving clinic to claim his fifth Halle trophy, winning the title without losing his serve or a set throughout the week. Federer’s closest set was 7-5, and that came in the second round against Jan Vacek.

Federer rode that momentum to the Wimbledon final, which he reached without losing a set. But he would fall in the final against Rafael Nadal, 7-9 in the fifth set, in what was one of the greatest matches in tennis history.

It turned out to be one of the 12 titles Federer won in 2006, which remains a personal record for the Swiss. He tallied a 92-5 record that year.

2005 def. Marat Safin 6-4, 6-7(6), 6-4
Federer came within two points of losing in the first round against Robin Soderling, but went on to capture his third consecutive Halle title. The 23-year-old saved five of the six break points he faced and won an impressive 74 per cent of his second-serve points against Marat Safin in the two-hour, five-minute final.

The Swiss’ Halle run began a streak of 35 consecutive matches won, lasting until the final of the Tennis Masters Cup in November.

2004 def. Mardy Fish 6-0, 6-3
This was Federer’s most dominant run to a Halle victory, dropping only 26 games in five matches. It was also his most lopsided championship triumph, losing just three games against then-World No. 23 Mardy Fish. Federer would go on to win his next three tournaments as well, including his second Wimbledon trophy.

2003 def. Nicolas Kiefer 6-1, 6-3
Making his fourth appearance in Halle, Federer came in looking for his first grass-court title. He twice rallied from a set down – against Fernando Vicente in the second round and Mikhail Youzhny in the semis – before conceding just four games to Nicolas Kiefer in the final, where he didn’t face a break point. Federer took that confidence into Wimbledon, where he claimed his first Grand Slam title.

Nick Kyrgios says organisers are being “selfish” by intending to stage the US Open from 31 August.