Dante Bottini first watched Shang Juncheng play tennis at the age of 15. Bottini was coaching Chilean Nicolas Jarry, who practised with the teen. His first impression of ‘Jerry’ was simple.

“Amazing,” Bottini told ATPTour.com. “Very nice. Amazing player. I mean obviously he was very young, but I already could tell that he had great potential.”

It has not taken long for Shang to prove the Argentine’s instincts right. Aged 17, the Chinese star on Monday became the first man in history from his country to win a match at the Australian Open. That came after the teen successfully qualified for a Grand Slam on his first attempt.

“I’m a little surprised that I came this fast, but at the same time, I think it’s all the hard work from my team and myself that paid off,” Shang said. “I think I’m just nothing else but excited about what’s coming next.”

The World No. 194 has been a hot prospect for years. The son of two professional athletes — father Shang Yi played football and mother Wu Na was a world-championship winning table tennis player — trained at the Chinese branch of Emilio Sanchez’s academy before transitioning to the Florida site aged 12. Shang then moved as he neared age 15 to the IMG Academy, where he developed into the world’s No. 1 junior as a 16-year-old.

Through IMG, Shang has been able to train with some of the best players in the world, including Denis Shapovalov. The Canadian was quickly impressed.

“The first impression — and I hit with him a while ago the first time — was that I loved his attitude. I think a lot of juniors when they’re good, they get this little cocky attitude,” Shapovalov said. “But he was completely different. He was always very, very smiley, very happy to be on the court and obviously an unbelievable talent, but I think he works really well.”

Although Shang was clearly talented with the racquet, how he played the game from a young age caught Bottini’s attention.

“He was always very smart when he would play,” Bottini said. “Obviously when he was 15, he didn’t have enough power yet. But he would be very smart and take some decisions during the points that you would say, ‘Wow’.”

But Shang nor his team will get ahead of themselves. They are taking each day as an opportunity to learn and improve. Bottini has plenty of experience in that department. 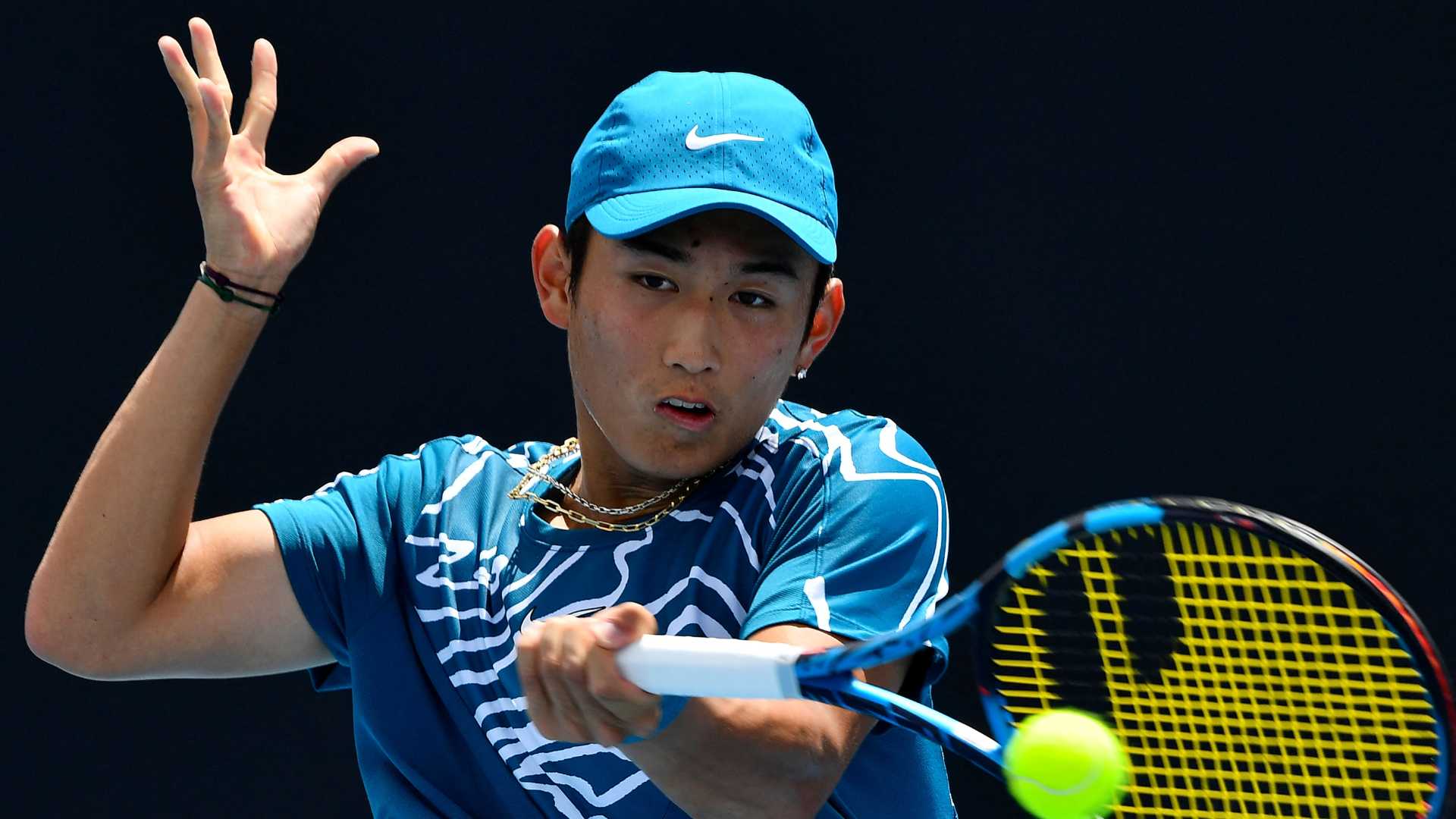 The Argentine was the longtime coach of Kei Nishikori, who like Shang was a rising star with a bright spotlight on him. The pair worked together for nearly a decade, and Bottini helped Nishikori to as high as World No. 4.

“What I remember we did good that helped us is to not rush things. Don’t rush things and keep working on developing his game,” Bottini said. “Obviously Jerry is 17, he has a great game, but he’s still growing up as a human being, as a person. He’s still growing up. We need to be very careful and guide him on the right path.”

Bottini began working with Shang this offseason. The Chinese player has quickly grown to enjoy working with the veteran coach, who also mentored former World No. 3 Grigor Dimitrov.

“Dante, I’m very lucky to have him on my side. I mean, his opinions mean a lot to me. We often talk about how to play the game,” Shang said. “In the team, we all agreed that everything is mental, that everybody can play good tennis, and just having the positive mindset in the big moments can change the whole game.”

Bottini explained that it is not just about having the right mindset now, but instilling it early on in Shang’s career to help in the future.

“I’m always very positive and also try to be aggressive with an aggressive mentality on the court. Obviously it’s been [that way] since we started working together. All the drills that we do too is to keep coming a little more forward,” Bottini said. “I’m not saying to the net, but be a little more aggressive. He’s been doing great in practice and obviously in the matches too. Also on the court he’s been very positive and with an aggressive mentality. That’s why he’s been playing some great tennis I think and closing the matches the way he’s been closing.”

With four victories in the bag — three in qualifying and another in the main draw — Shang is high on confidence. He will be able to swing freely on Wednesday against 2022 US Open semi-finalist Frances Tiafoe.

“I think overall this whole week was different for me. Playing my first Slam, every day I was pretty nervous getting on the court,” Shang said. “But at the same time, it’s one of the best moments I have had so far in my career, so like I said, I’m just very excited to be on court, and everything is a learning process for me. I’m just super happy to be here.”

The story of how a coup attempt in Nigeria forced former Australian Open champion Arthur Ashe to flee the court at gunpoint.

Britain’s Emma Raducanu and Coco Gauff meet for the first time in an eagerly anticipated second-round match on day three at the Australian Open.

How does Andy Murray keep managing to leave us all stunned? The 35-year-old with a metal hip says he is proud of his Australian Open victory over Matteo Berrettini.

Alongside Stefanos Tsitsipas and Rinky Hijikata, there is another potentially exciting clash between a home wildcard…

Potentially the highlight of the women’s next round matches, Emma Raducanu will face Coco Gauff for a spot in round…

Rafael Nadal will look to build on his opening round win when he takes on Mackenzie McDonald in round two. The defending champion…

Opening Day 3 of the Australian Open on Rod Laver Arena will see the World No.1 Iga Swiatek face Camila Osorio. It will be the…

Djokovic Up & Running In Melbourne With Rapid Carballes Baena Win

Djokovic Up & Running In Melbourne With Rapid Carballes Baena Win

Novak Djokovic made a lightning-fast start to his bid for a record-extending 10th Australian Open title on Tuesday, when the Serbian cruised past Roberto Carballes Baena 6-3, 6-4, 6-0 on Rod Laver Arena.

Playing his first match at Melbourne Park for two years, Djokovic maintained a high level throughout to claim a comfortable win despite an admirable effort from the World No. 75 Carballes Baena. The fourth seed converted five of nine break points to seal a two-hour, two-minute triumph and book a second-round meeting with Hugo Dellien or qualifier Enzo Couacaud.

“I really feel very happy that I’m back in Australia, back here on the court where I had the biggest success in my career,” said Djokovic, who has now won 22 consecutive matches on Rod Laver Arena since 2019. “This court is the most special court in my life, and I couldn’t ask for a better start to the tournament.

“I guess the more you win on a certain court, the more confident and comfortable you feel every next time you step on it. That’s probably one of the reasons. I’ve been fortunate to win a lot of matches on this court, particularly in the night sessions. If I had to choose one court and conditions, it would be night session on Rod Laver Arena, all night long.”

The win extended Djokovic’s winning streak on Australian soil to 35. Should the 35-year-old lift the trophy in Melbourne this fortnight, he will equal Rafael Nadal’s record tally of 22 Grand Slam crowns, while a 10th Melbourne triumph would also see Djokovic return to No. 1 in the Pepperstone ATP Rankings for the first time since last June.

Djokovic, Ruud, Tsitsipas Battle For No. 1 At Australian Open

Andy Murray produces one of his best performances in recent years to hold off Italian 13th seed Matteo Berrettini in a five-set thriller at the Australian Open first round.