After experiencing several highs and lows in 2022, Argentine Juan Manuel Cerundolo got off to a fast start this year on home soil at the season-opening Tigre Challenger.

The 21-year-old recently battled leg and hip injuries which forced him to take time off. When the lefty was able to play tournaments consistently in the latter part of 2022, he made a sudden impact as he triumphed at the Buenos Aires and Coquimbo Challengers. Cerundolo, who has won 19 of his past 22 matches, picked up right where he finished the previous season.

Cerundolo, seeded first, rallied from a set down in Sunday’s final to defeat Bolivian Murkel Dellien 4-6, 6-4, 6-2 and claim the Challenger Aysa de Tigre-1. 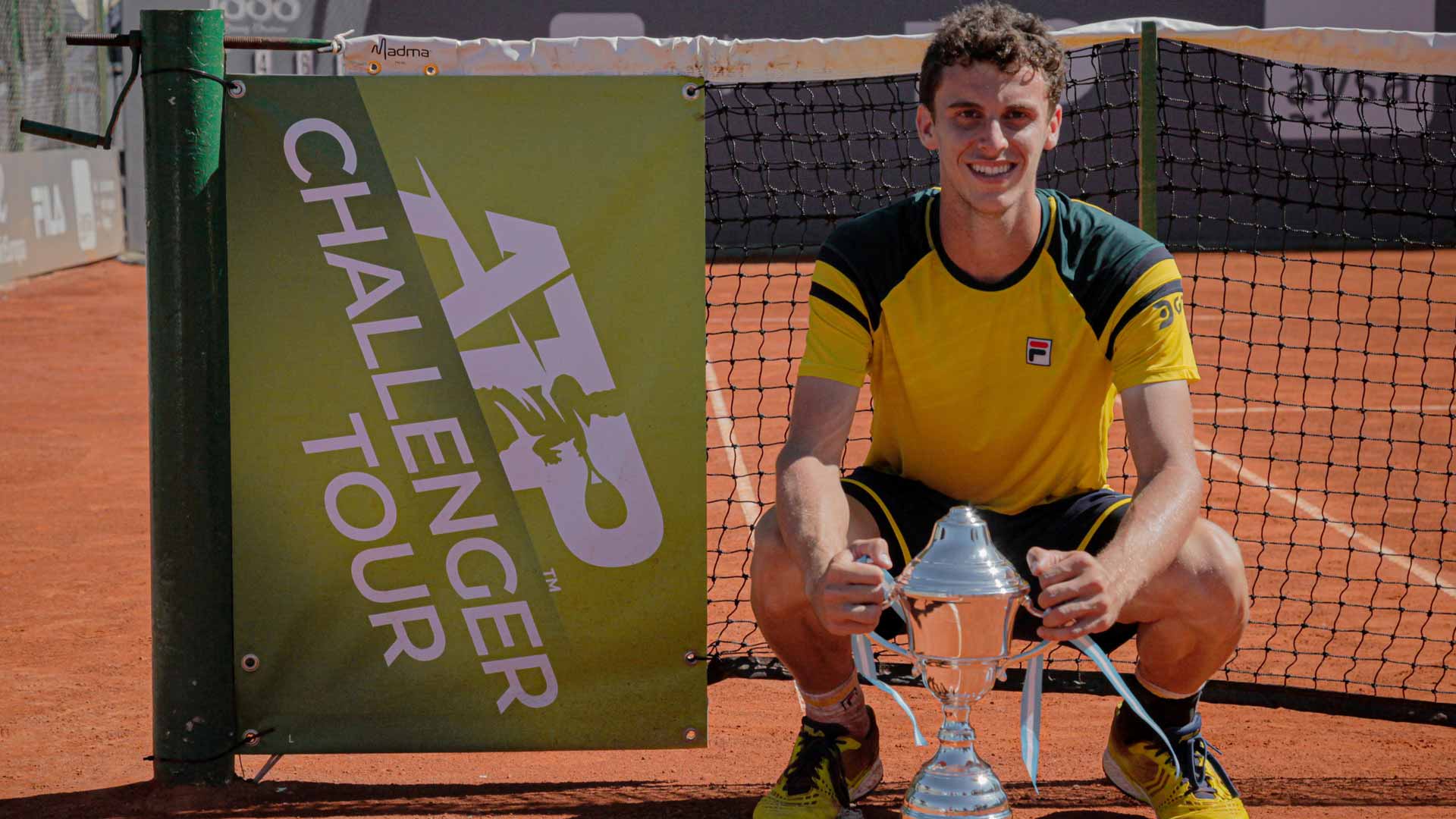 “I feel really good about this week,” Cerundolo said. “I think I had an amazing level, and tried to play offensive. The final was super tough coming from a set down, but I managed to turn it over. I’m really happy.”

At the Oeiras Indoor-1 Challenger in Portugal, Joris De Loore advanced through qualifying en route to collecting his maiden Challenger trophy. The Belgian took down Romanian Filip Cristian Jianu 6-3, 6-2 in the championship match.

De Loore is the oldest (29 years, 8 months) first-time winner since 2015, when Italian Luca Vanni won his maiden title at 31. The Bruges native has been plagued with injuries throughout his career, including missing the entire 2019 and 2020 seasons following multiple surgeries. The 29-year-old’s persistence paid off this week when he won the Challenger 50 event. 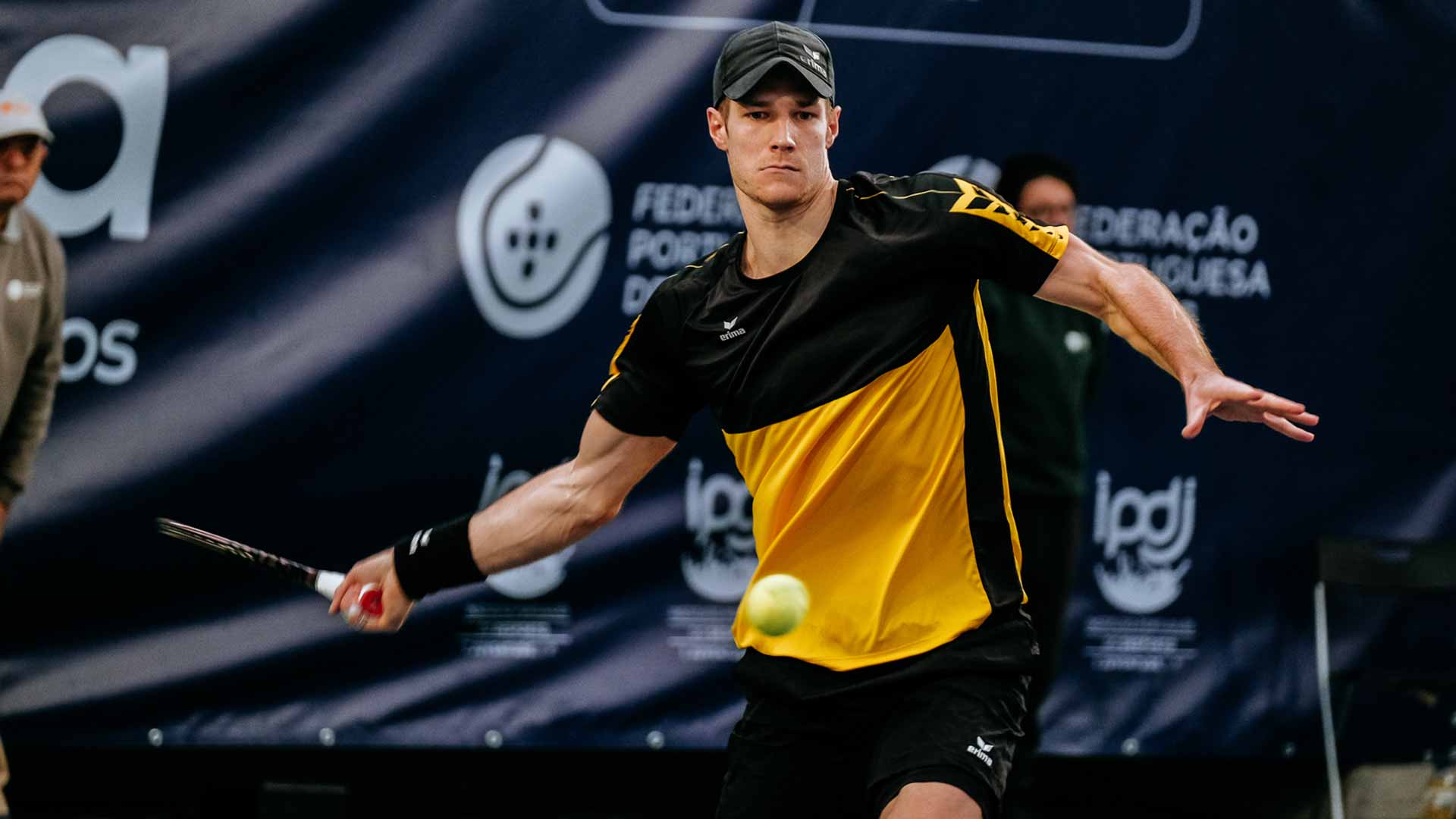 “Over the past seven years, every year I had a surgery,” De Loore said. “This [the title] will give me a boost, I really feel that I am physically good now and now it’s just about staying healthy. I think this year can be my year.”

In Canberra, Australia, Marton Fucsovics collected his second Challenger title in the past three months. The Hungarian defeated Swiss youngster Leandro Riedi 7-5, 6-4 in the final at the P2 Advisory Canberra International.

“It’s a great, great start of the year. Cannot wish for a better week,” Fucsovics said. “I was very focussed on each match and I felt very strong physically. I think it’ll help me in the future and especially at the Australian Open.” 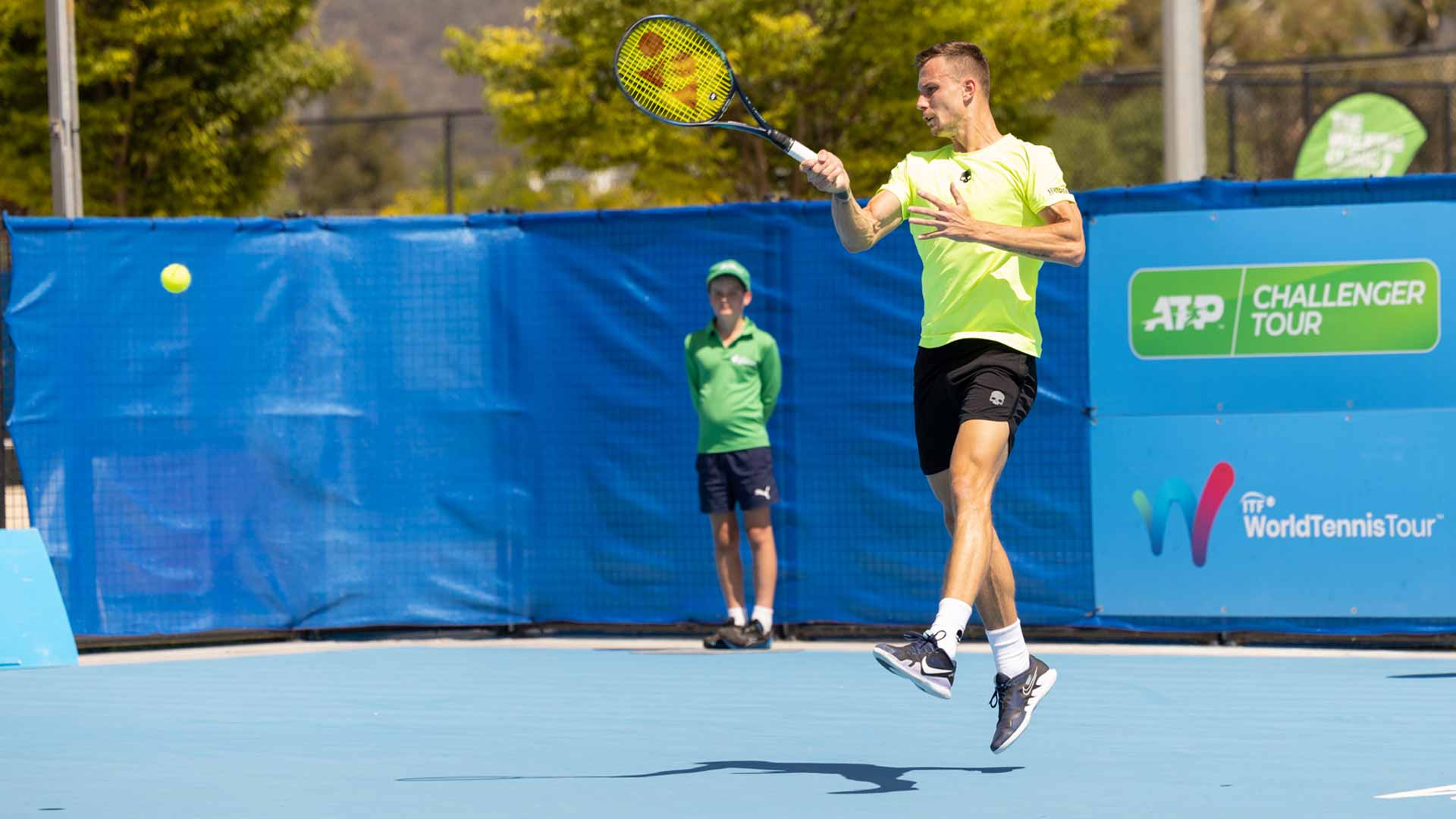 Fucsovics, 30, has played some of his best tennis in Australia. The six-time Challenger champion has won 13 of his past 14 matches and will next look for another strong run at the season’s first Slam. The World No. 74 in the Pepperstone ATP Live Rankings has twice reached the fourth round at the Australian Open (2018, 2020) before losing to Roger Federer on both occasions.

Saturday’s Canberra final marked the end of Riedi’s 16-match winning streak. The 20-year-old went on a late-season surge in 2022, when he collected the title at the Helsinki and Andria Challengers.

“I played a really good tournament,” Novak said. “Lost only one set and felt really good, I would say it’s the perfect start to the season.”

Challenger Tour: Five To Watch In 2023

The 29-year-old rises to 142 in the Pepperstone ATP Live Rankings and keeps his eyes set on his goal for the season: “to get back into the Top 100.”

On the island of New Caledonia, Raul Brancaccio fended off a championship point before a four-hour rain delay to defeat Frenchman Laurent Lokoli 4-6, 7-5, 6-2 and win the Open SIFA Nouvelle-Caledonie.

After claiming his first Challenger title on home soil in July, the Italian had his back against the wall three times this week in Noumea. Brancaccio dropped the opening set in his final three matches of the week, including comeback wins against former Top-20 players Benoit Paire and Cristian Garin, who was seeded first at the Challenger 100 event.

The Adelaide Magic Continues For Kokkinakis: 'That's What They Came To See'

The Adelaide Magic Continues For Kokkinakis: ‘That’s What They Came To See’

One year after lifting his first ATP Tour trophy in Adelaide, the Australian made more memories on his home court Monday evening when he battled past countryman Alexei Popyrin 6-0, 6-7(5), 7-5 after two hours and 45 minutes in the first round of the Adelaide International 2.

“It’s what you play for to be honest. I’ve had many great memories last year as well. Having that home energy and home crowd was crazy. I’m happy I gave them something to cheer about there,” Kokkinakis said. “It was almost going too smoothly, but then when I got the crowd into it and got them fired up, I know that’s what they came to see. It’s why you do all the work in all those tough moments. You remember those feelings and that’s something you can’t replicate other than [in] tennis.”

After falling behind by a break in the third set, it seemed Kokkinakis was on the brink of defeat. But the 26-year-old rallied for an emotional victory to the delight of the fans.

It will not get easier in the second round when Kokkinakis plays top seed Andrey Rublev, the No. 6 player in the Pepperstone ATP Rankings.

“It’s going to be tough. He hits the [heck] out of the ball. I practised with him two days ago and it’s not easy. We played well, it was a good set. But it’s tricky. He’s a hell of a player,” Kokkinakis said. “It’s not going to be easy, but I’m going to take my game and get after it. It’s going to be a tough match.”

American Mackenzie McDonald let slip a two-set advantage against Daniel Evans three years ago at the Australian Open. McDonald earned a measure of revenge on Monday when he ousted the Briton 7-5, 7-5.

Serbian Miomir Kecmanovic also reached the second round with a 6-4, 7-5 triumph over Briton Kyle Edmund.

Matteo Arnaldi enjoyed a breakthrough 2022, capped by his appearance at the Next Gen ATP Finals. The 21-year-old Italian looks set to pick up where he left off last year.

#NextGenATP Dalibor Svrcina also moved into the second round. The Czech ousted Briton Paul Jubb 6-3, 1-6, 6-4 and will next take on Argentine Nicolas Kicker.

Brandon Holt, who made a splash by reaching the second round of the US Open main draw as a qualifier, rallied past third seed Radu Albot 5-7, 6-3, 6-4. The American will face Portugal’s Gastao Elias in the next round.

Briton Jack Draper reaches the last 16 of the Adelaide International 2 but compatriots Dan Evans and Kyle Edmund are out.

Emma Raducanu hopes to be fit for Australian Open

Emma Raducanu says she hopes she will be fit for this month’s Australian Open but is trying “not to expect too much”.

Heather Watson is one of three Britons to be knocked out in the first round of qualifying for the Australian Open.

Australian Open: Players can compete if they have Covid-19

Players at the Australian Open will not need to take Covid-19 tests and could play if they have the virus.

David Goffin earned his first win of the season Monday when he overcame fifth seed Alexander Bublik 6-3, 6-4 to reach the second round at the ASB Classic in Auckland.

The 32-year-old went 0-2 at the inaugural United Cup last week in Perth but responded with a confidence-boosting performance against Bublik, returning with great depth to break the 25-year-old six times en route to his 74-minute win.

“I returned really well,” Goffin said. “We all know how he can serve, it is not easy to return. The key was the return for sure. I tried to stay calm because on my service games, I know how hard he can hit the ball and be aggressive. I stayed calm and that was the key.

“I love the atmosphere on this court, with people having fun. They are having dinner, it is a nice arena and it is fun to play in front of them.”

Goffin, who is making his first appearance at the ATP 250 event since 2013, now leads the Kazakhstani 2-0 in their ATP Head2Head series. He will next face 2020 champion Ugo Humbert or American qualifier Christopher Eubanks.

Jenson Brooksby snapped a four-match losing streak when he defeated Italian Fabio Fognini 6-7(2), 6-1, 6-3. In an entertaining battle, the 22-year-old American raised his intensity and level in the third set, recovering from squandering a break advantage to advance after two hours and 16 minutes.

The World No. 48, who was competing for the first time this season, will next play third seed Diego Schwartzman.

In the first match of the day, Frenchman Constant Lestienne cruised past Argentine Pedro Cachin 6-3, 6-1 in 64 minutes. The World No. 65 will next play two-time Auckland champion John Isner or French qualifier Gregoire Barrere.

Jobs in the Finance Industry

The financial services industry is a crucial part of the global economy. It can help people and businesses reduce costs…