All-Surface Novak: Learn Why Djokovic Is In A Class Of His Own

All-Surface Novak: Learn Why Djokovic Is In A Class Of His Own

The Serbian is unmatched in his adaptability

Novak Djokovic is in a class of his own competing on the three outdoor surfaces in our sport. An Infosys ATP Beyond The Numbers analysis of the highest achievers when playing outdoors identifies Djokovic is the only player to push through the 54 per cent threshold of points won on grass, hard and clay. The data set goes back to 1991 when official records began and includes all players who have competed in a minimum of 10 matches on each surface.

The following breakdown includes only players to have broken through the 54 per cent threshold for points won on each of the three outdoor surfaces.

First on hard. Second on clay. Third on grass. It’s a ubiquitous record that finds Djokovic as the only player in 30-plus years to break through the 54 per cent barrier with points won on all three outdoor surfaces. It speaks to his longevity and adaptability to thrive on slow, medium and fast courts.

Djokovic is imminently poised to improve his grass-court resume in the coming weeks at Wimbledon, where he has already won the title six times, including the past three editions. An interesting comparison between generations is that of Djokovic and grass-court legend John McEnroe.

How Murray, Djokovic Cut Down Big Servers On Grass

Djokovic has already surpassed McEnroe in one facet, with six Wimbledon titles to the American’s three. With a win at SW19 in 2022, Djokovic would pull even with McEnroe with eight grass-court titles apiece. In fact, the equality runs even deeper if Djokovic is again triumphant this year, as both players would then share a grass-court match winning percentage of exactly 85.8 per cent, with Djokovic winning 109 of 127 and McEnroe 121 of 141. There are still seven matches in the way of that becoming reality.

What about comparing Djokovic to Sampras and Federer on grass?

Sampras edges Djokovic and Federer with grass-court points won, but Djokovic climbs above Sampras when analysing games won on grass.

Federer and Sampras have built their grass-court resumes much more from the serving side, while Djokovic leads the duo when returning.

Djokovic gets the opportunity to add to his already impressive grass-court legacy in the next couple of weeks at Wimbledon, hunting a seventh title, which would put him equal with Sampras and one behind Federer.

History once again beckons for the steadfast Serbian.

In what could be his last slam of the year due to questions over his ability to access the United States, Novak Djokovic will…

Although likely no longer a real contender, Andy Murray‘s Wimbledon journey will be one to watch this fortnight…

Tenth seed Emma Raducanu will not have it easy on her return to Wimbledon, facing a dangerous opponent in Alison Van Uytvanck.…

It has been an eventful 2022 in Tennis so far but Wimbledon has even outdone the Australian Open for drama this time round.…

With Iga Swiatek currently on a 35 match winning streak, it seemed unlikely there would be any story that could match that…

Nick Kyrgios says he will embrace being the “villain” when he faces British wildcard Paul Jubb in the Wimbledon first round.

ATPTour.com looks at some of the matches to watch on Day 1 in the UK capital.

Djokovic opens proceedings on Centre Court with his second tour-level meeting against South Korean Soonwoo Kwon. Not only is the top seed defending his 2021 crown, but the six-time champion is also pursuing his fourth consecutive title at the grass-court major. That would draw him level with legendary American Pete Sampras.

“I would like to be in the [final] to eventually make history,” said Djokovic at his pre-tournament press conference. “Pete Sampras winning his first Wimbledon was the first tennis match I ever saw on the TV. So of course, there is a lot of connection to this tournament. Pete has won it seven times… Hopefully I can do the same this year.” 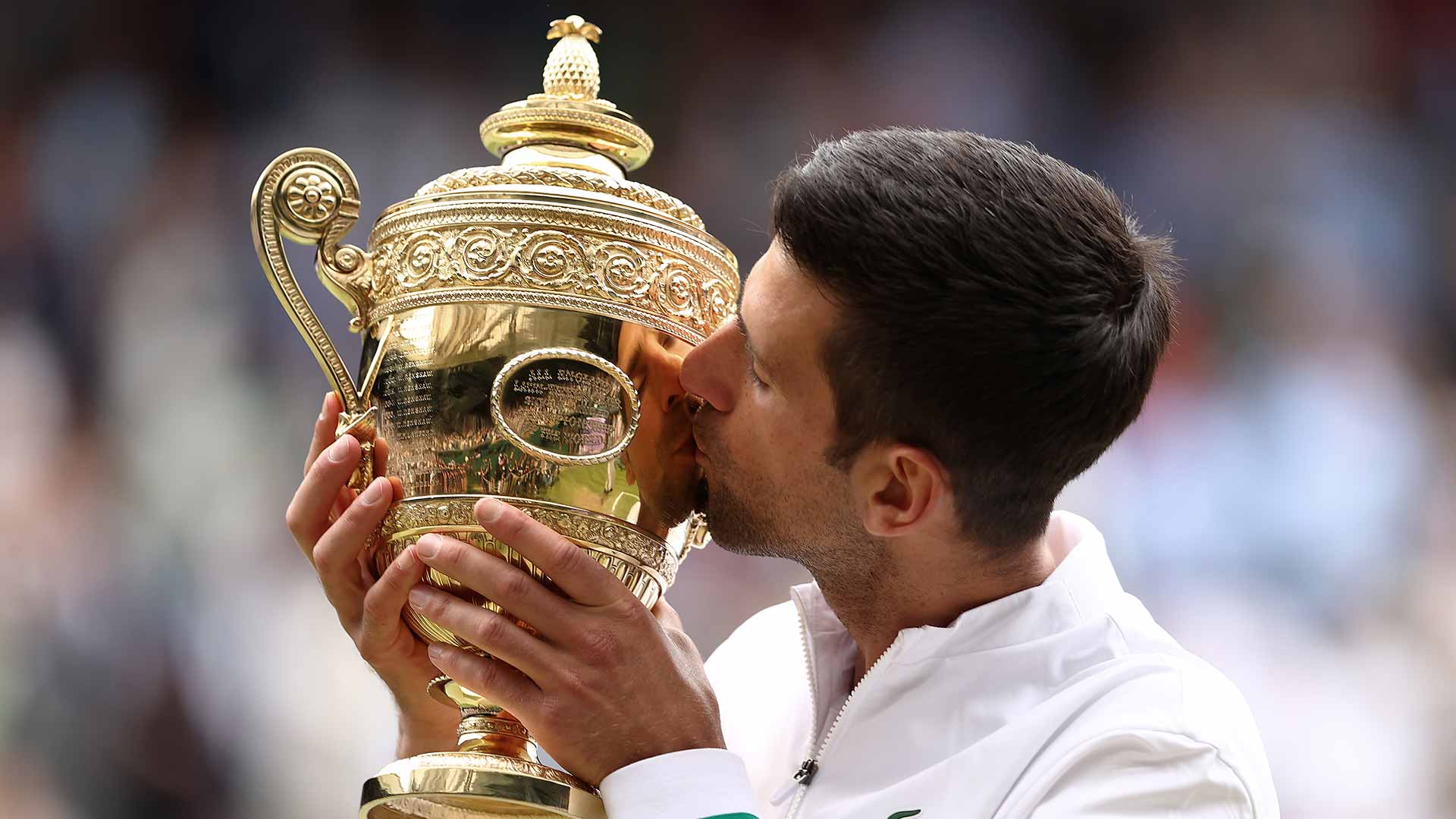 Djokovic will step on court against Kwon having not lost at Wimbledon since 2017. The World No. 3 may not have played a competitive match since his quarter-final defeat to Rafael Nadal at Roland Garros on 31 May, but his opponent Kwon has played just two matches in that time after opening-round defeats at the ATP Challenger Tour event in Surbiton and at the Libema Open in ‘s-Hertogenbosch.

With the added motivation of winning his 21st Grand Slam title to move within one of record-holder Rafael Nadal’s 22 major crowns, Djokovic will seek a fast start as he looks to extend his record in Wimbledon first-round matches to 17-0. The pair’s previous tour-level meeting came on clay in the Djokovic’s hometown of Belgrade in 2021, when the Serbian ran out a straight-sets winner. History may be against him, but can Kwon spring an opening-day upset for the ages?

Two-time champion Murray reached the final at the BOSS OPEN in Stuttgart three weeks ago, a run that included impressive wins against Stefanos Tsitsipas and Nick Kyrgios before a three-set loss to Matteo Berrettini. As he prepares to take on James Duckworth at Wimbledon, where the Briton holds a 59-11 match record, the former World No. 1 believes his exploits in Germany show he is still a force to be reckoned with.

“I think I showed a couple weeks ago [in Stuttgart] that there was still good tennis left in me,” said Murray in his pre-tournament press conference. “I beat a guy [Tsitsipas] in the top five in the world. I was neck-and-neck with Berrettini, who is one of the best grass-court players in the world before his injury. I played well against Kyrgios, as well.”

Duckworth is seeking his maiden tour-level victory of the year against Murray. The 30-year-old reached his career-high Pepperstone ATP Ranking of No. 46 on 31 January, before his season was derailed by a hip operation that kept him out of action until May. The Australian may be short on recent wins, but his second-round victory against proven grass-court performer Sam Querrey at Wimbledon last year is evidence of the threat he poses to Murray.

“He [Duckworth] is a guy that’s had quite a few operations,” said Murray. “He’s had quite a few injury issues over the years. He’s a proper hard worker. He finished last year extremely well, the second half of the year… Obviously I wish him well coming back from the surgery, and I’m sure we’ll have a good match on Monday.”

Can Carlos Alcaraz bring his stellar 2022 form to the grass? The Spaniard faces a tough start to his campaign on Court 1 against the dangerous Jan-Lennard Struff. Alcaraz has not played since his quarter-final defeat to Alexander Zverev at Roland Garros, the same event where his only tour-level meeting with Struff took place in 2021.

On that occasion, the German ran out a straight-sets winner, but the fifth-seeded Spaniard has since enjoyed a rapid rise to No. 6 in the Pepperstone ATP Rankings, picking up ATP Masters 1000 titles in Miami and Madrid en route. Alcaraz fell to Daniil Medvedev in the second round on tournament debut a year ago, but a 32-4 record in 2022 and the adaptability in his game suggests there is no reason the 19-year-old cannot continue his charge on the lawns in south-west London.

Struff will seek to exploit Alcaraz’s lack of experience on grass, but the German has never been past the third round at Wimbledon. His big-serving, high-powered game should nonetheless be suited to the fast-paced nature of the surface. Can he make it count on Monday afternoon?

An opening-day blockbuster clash on Court 2 is guaranteed to feature some of the heaviest hitting of the fortnight at the All England Lawn Tennis Club.

Although 10th seed Sinner fell to Marton Fucsovics in the first round on his main draw debut in 2021, the 20-year-old is a consistent performer on the big stage. Quarter-final runs at the Australian Open and in Miami, Monte Carlo and Rome this year suggest form is not a problem for the Italian, but he is yet to win a tour-level match on grass.

His opponent on Monday is vastly more experienced on the surface — Wawrinka reached the quarter-finals at Wimbledon in 2014 and 2015 — but the former World No. 3 is playing just his fifth tour-level tournament since 13 months out with a foot injury. His opening win against Frances Tiafoe at The Queen’s Club two weeks ago was Wawrinka’s first triumph on grass since Wimbledon 2019.

Wawrinka leads 2-0 in the pair’s ATP Head2Head series, but he has not played Sinner since 2019 when the Italian was an 18-year-old rookie on the Tour. Now No. 13 in the Pepperstone ATP Rankings and with five tour-level titles under his belt, Sinner will hope the time has come for his grass-court breakthrough in one of the matchups of the opening round.

Hubert Hurkacz arrives at Wimbledon off the back of one of the performances of the season so far in his straight-sets win against Medvedev at the Terra Wortmann Open in Halle. The 2021 semi-finalist must pass a difficult opening test, however, in Alejandro Davidovich Fokina.

British No. 1 Cameron Norrie kicks off the action on Court 2, where the ninth seed will take on Pablo Andujar. Norrie reached the third round for the first time in 2021 before falling to eight-time champion Roger Federer, and he arrives in London having already added two ATP Tour titles to his collection in 2022. Wild card Ryan Peniston, who upset Casper Ruud en route to the quarter-finals in Eastbourne, opens against Henri Laaksonen.

Third seed Ruud seeks to respond strongly to that shock defeat against Albert Ramos-Vinolas. The Norwegian is seeking his maiden main draw win at Wimbledon, while Spaniard Ramos-Vinolas chases his first win on the London grass since he reached the third round in 2017. The 2014 semi-finalist Grigor Dimitrov is also in action, taking on Steve Johnson.