Mektic/Pavic advance to championship match at The Queen’s Club

Marcel Granollers and Horacio Zeballos opened their Terra Wortmann Open campaign with a pair of comfortable straight-sets victories earlier this week in Halle, but things were not so straightforward for the top seeds on Friday.

The Spanish-Argentine pairing recovered a 1-4 deficit before taking the opening set on a tie-break in their semi-final against fourth seeds Ivan Dodig and Austin Krajicek. Although Dodig and Krajicek responded by taking the second-set tie-break, it was the Granollers and Zeballos who prevailed by holding their nerve to clinch a 7-6(6), 6-7(4), 10-8 victory with their third match point.

They will now play for their first ATP Tour title since 2021 in Cincinnati in Sunday’s championship match, where they will face Roland Garros champions Marcelo Arevalo and Jean-Julien Rojer or third seeds Tim Puetz and Michael Venus.

Mektic/Pavic Dig Deep For Final Berth In London
There was also Match Tie-break drama on Friday at the Cinch Championships in London, where second seeds Nikola Mektic and Mate Pavic came through a nail-biting semi-final clash with Taylor Fritz and Tommy Paul to secure a maiden championship match appearance at the ATP 500 event.

Mektic and Pavic held their nerve from 7/7 in the Match Tie-break at The Queen’s Club to secure a 5-7, 6-2, 10-8 victory against their American opponents. The Croatians are hunting their third title of 2022 in London, after also lifting trophies this year in Dubai and Belgrade. Their opponents in Sunday’s championship match will be Lloyd Glasspool and Harri Heliovaara or Rohan Bopanna and Denis Shapovalov.

Nadal Preparing For Wimbledon: 'I'm Excited About It'

Nadal Preparing For Wimbledon: ‘I’m Excited About It’

Spaniard has not competed at SW19 since 2019

Rafael Nadal produced another astonishing chapter to add to his legend at Roland Garros, where he claimed another Grand Slam title, increasing his historic men’s singles record to 22 majors. The Manacor-native returned to the courts this week at the Mallorca Country Club, the venue for next week’s Mallorca Championships.

The first-placed player in the Pepperstone ATP Race To Turin was back on the grass courts testing himself after the medical treatment on his foot in preparation for Wimbledon.

“I’m happy. I haven’t limped for a week and the evolution of training is progressing,” said the Spaniard. “From day to day the pain has been different and that’s progress. I have to wait a little. My intention is to try and play Wimbledon and this week has told me there is a chance.”

The Balearic Islander’s plan is to travel to London on Monday to prepare for the third Grand Slam of the year.

“I’ve had two treatment sessions, as was planned. At the moment the progress, as I see it, is satisfactory,” he added regarding his medical treatment last week.

However, Nadal is being cautious, adding: “I’m prudent because I know that things change. At the moment, I’ve been able to train over these five days. That’s progress and it allows me to return to Wimbledon after three years. I’m excited about it. It’s a question of taking it day by day, but giving myself a chance to compete.”

The Spaniard has not graced the lawns of Wimbledon since 2019, when he reached the semi-finals (l. to Roger Federer). “I haven’t played on grass for three years, you have to be patient with the progress. Every day I’ve improved and there is one week left of training in London before starting the tournament. I hope I can use it to get competitive.”

He also touched on the fact that he is riding a wave of momentum that will serve him perfectly for an event of such magnitude. So far in 2022, he owns a 30-3 record.

“It’s true that playing well at Roland Garros gives you confidence, but grass is a very difficult surface. Any round is complicated. The start of the tournament will be vital for me because, if you manage to progress, later the opponents are more difficult, but then you have more confidence because you’ve found your rhythm on grass,” he explained. 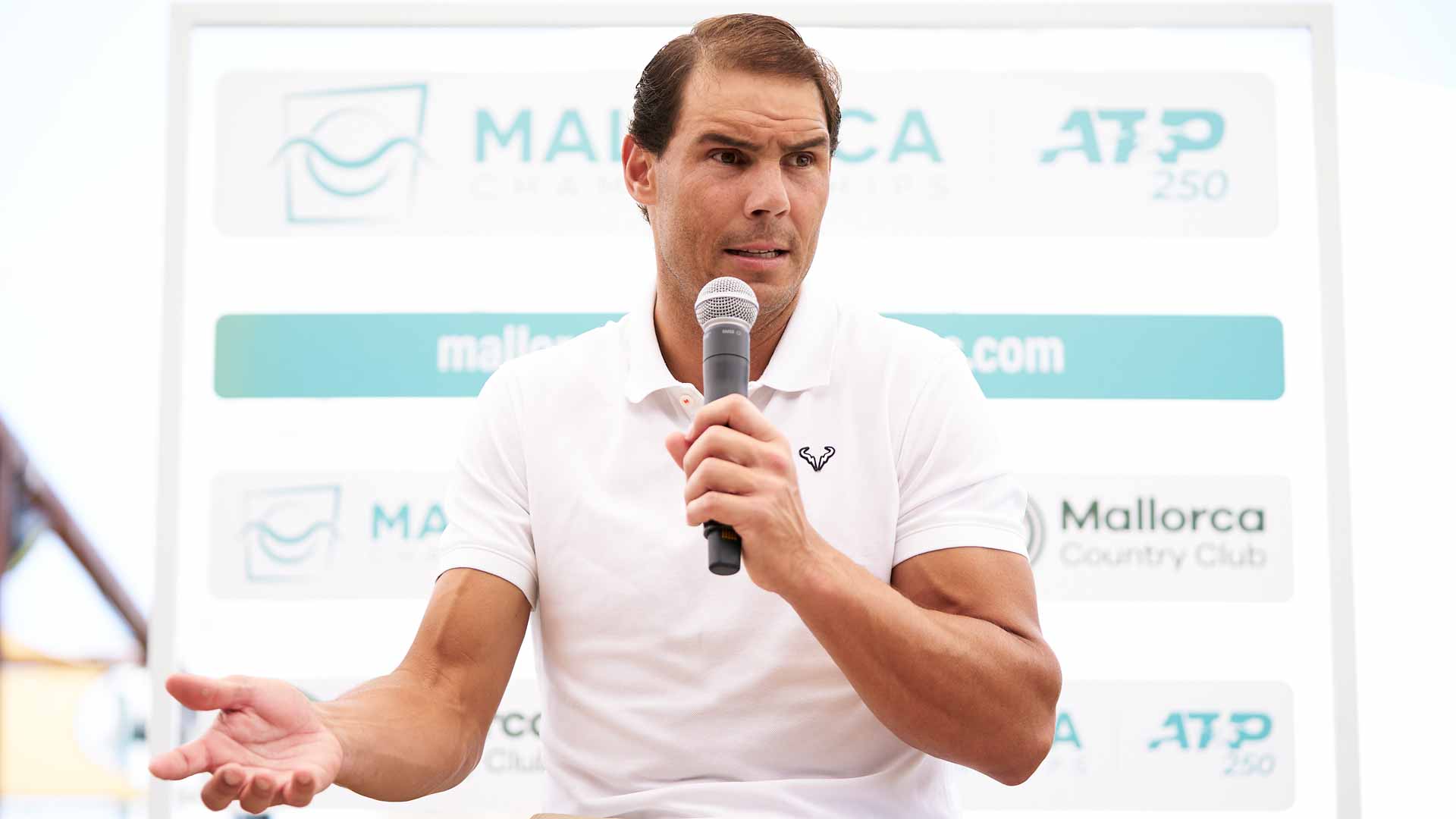 Photo Credit: Mallorca Championships
Despite Nadal’s caution, a broader perspective reveals a new challenge that the Spaniard is facing. Having won the Australian Open and Roland Garros this season, for the first time in his career he is attempting to win the first three Grand Slams of the season.

“On the men’s tour, nobody has done the Grand Slam since Rod Laver,” Nadal pointed out. “Novak Djokovic came closest last year. If it’s rarely been done, it’s difficult to contemplate, even more so at 36 years of age.”

Marin Cilic maintained his love affair with the Cinch Championships Friday, moving past Finnish qualifier Emil Ruusuvuori 7-6(2), 6-4 to reach the semi-finals in London for the sixth time.

The Croatian lifted the trophy at the ATP 500 grass-court event in 2012 and 2018 and has now earned 35 wins at The Queen’s Club, the most of any active player.

In a hard-fought clash on centre court, Cilic was the more proactive player. The 33-year-old hit 11 aces and fired his flat groundstrokes with precision to outmanoeuvre Ruusuvuori and advance after one hour and 48 minutes in their first ATP Head2Head meeting.

“I am taking it step by step. I am trying to keep my form up and my level,” Cilic said after claiming his 80th grass-court win. “Every match is a challenge. I am focusing and taking it step by step. Getting to 80 wins did not come overnight. It took a lot of years and training and matches. Hopefully there will be many more wins.”

The seventh seed, who arrived in London off the back of a first semi-final appearance at Roland Garros, is seeking to win his 21st ATP Tour title this week, but first of the year.

Cilic will continue his trophy bid when he plays Filip Krajinovic in the semi-finals on Saturday.

Krajinovic had not earned a tour-level win on grass before this week, but will now compete in his second semi-final of the season, having also reached the last four in Montpellier in February. The 30-year-old beat Americans Jenson Brooksby and Sam Querrey this week in London.

Watch live on the BBC as players try to get through three rounds of qualifying to enter the Wimbledon main draw.

World No. 12 reaches third tour-level semi-final of 2022 in Germany

With the help of some unorthodox on-court tactics, Hubert Hurkacz’s run continued Friday at the Terra Wortmann Open in Halle.

The fifth seed Hurkacz found something extra in both tie-breaks as he edged Felix Auger-Aliassime 7-6(2, 7-6(4) to reach his third semi-final of the season at the ATP 500 event.

A match featuring no breaks of serve and just one break point went the way of the Pole after an absorbing one hour, 47 minutes, but Hurkacz later admitted that his inability to make a dent in the Canadian’s serve had led to him trying something different in return games on OWL Arena.

“Grass is a tricky service,” said Hurkacz after the match. “I had absolutely no chance on the return. In the middle of the second set, I was guessing wrong all the time. I had another idea. I was looking at the shot clock, and if the number was even, I was going left and if the number was odd, I was going right. So that was my tactic for the return.”

Hurkacz reeled off six points in a row from 1/2 in the first-set tie-break to move ahead and held his nerve in a similar fashion in the second set to secure his first win against Auger-Aliassime in three attempts.

Hurkacz was relieved to prevail in a tight encounter. The 2021 semi-finalist Auger-Aliassime fired 38 winners to Hurkacz’s 23 and won 89 per cent (41/46) of points behind his first delivery, according to Infosys ATP Stats. Yet the Pole held firm to fend off break point and hold for 4-3 in the opening set and found his sharpest tennis in both tie-breaks to triumph.

“Probably nothing,” said the Pole when asked what he had done better than his opponent on the day. “Felix was playing really good, he had more chances during the first set. I was feeling confident on my serve. Maybe I wasn’t serving my best, but I was holding and obviously with his powerful serve I had no chance on the return. I was just trying to get to the tie-break.”

The fifth seed next takes on wild card Nick Kyrgios in a blockbuster semi-final at the ATP 500 event. Both Hurkacz and Kyrgios are chasing their maiden title of 2022 and their first career title on grass in north-west Germany. Hurkacz is expecting another challenging day on return against the big-serving Australian.

“Obviously he’s such a great player,” said Hurkacz when asked about his next opponent. “He has amazing hands and a great serve so it’s going to be super tough. I just need to keep holding my serve hopefully and try to maybe get a chance or two.”

British wildcard Ryan Peniston’s fine run at Queen’s is over after a tight loss to Filip Krajinovic in the quarter-finals in London.

Eastbourne: Emma Raducanu will not play at pre-Wimbledon tournament

Emma Raducanu will not play at next week’s Eastbourne International, leaving her short on grass-court preparation before Wimbledon.