Roger Federer says he was “lucky” after surviving a scare against Jo-Wilfried Tsonga to reach the Halle Open quarter-finals.

The eight-time Wimbledon champion is bidding for a 10th Halle title.

World number five Alexander Zverev withdrew from the doubles due to a knee injury but beat American Steve Johnson 6-3 7-5 to reach the last eight of the singles.

Federer will play Spaniard Roberto Bautista Agut in the next round at the grass-court tournament, while German 22-year-old Zverev will face Belgian David Goffin.

World number three Federer was a set and a break up against Tsonga, 34, before the Frenchman came back to take the match to a third set.

“I knew when I gave away that lead that it would be tight. Then it was about holding my nerve,” said the Swiss.

“The third set was more of a battle. I tried to stay calm. It had a bit of everything: happiness, sadness, frustration. It was a bit emotional at the end, which was nice.”

Zverev enjoyed a slightly more straightforward win, but admitted he is still having problems with his knee.

“Obviously my knee is still swollen but the pain is much less than it was a few days ago,” he said.

“I hope when the swelling goes out it will be much better.”

After all of his injury troubles, it could be said that Andy Murray deserves a bit of luck.

Pairing with Feliciano Lopez at the Fever-Tree Championships, the Brit hit two consecutive netcord winners to clinch the opening set and rode the momentum to defeat top seeds Juan Sebastian Cabal and Robert Farah 7-6(5), 6-3. Murray was competing in his first match since undergoing hip surgery after the Australian Open.

“I expected to enjoy the match because I told myself I was going to regardless of what happened,” said Murray. “To feel as well as I did there — not perfect in terms of everything like my movement, but pain-free…I enjoyed it. I feel like I’m going to continue to progress.”

The victory gave Murray his first ATP Tour grass-court doubles win since reaching the quarter-finals here in 2010. Next up for Lopez/Murray are the British pair of Daniel Evans and Ken Skupski or the #NextGenATP duo of Alex de Minaur and Felix Auger-Aliassime.

An all-Murray match is also still in the cards. Should Murray/Lopez and the British pair of Jamie Murray and Neal Skupski win their next matches on Friday, the brothers will face off in the semi-finals. 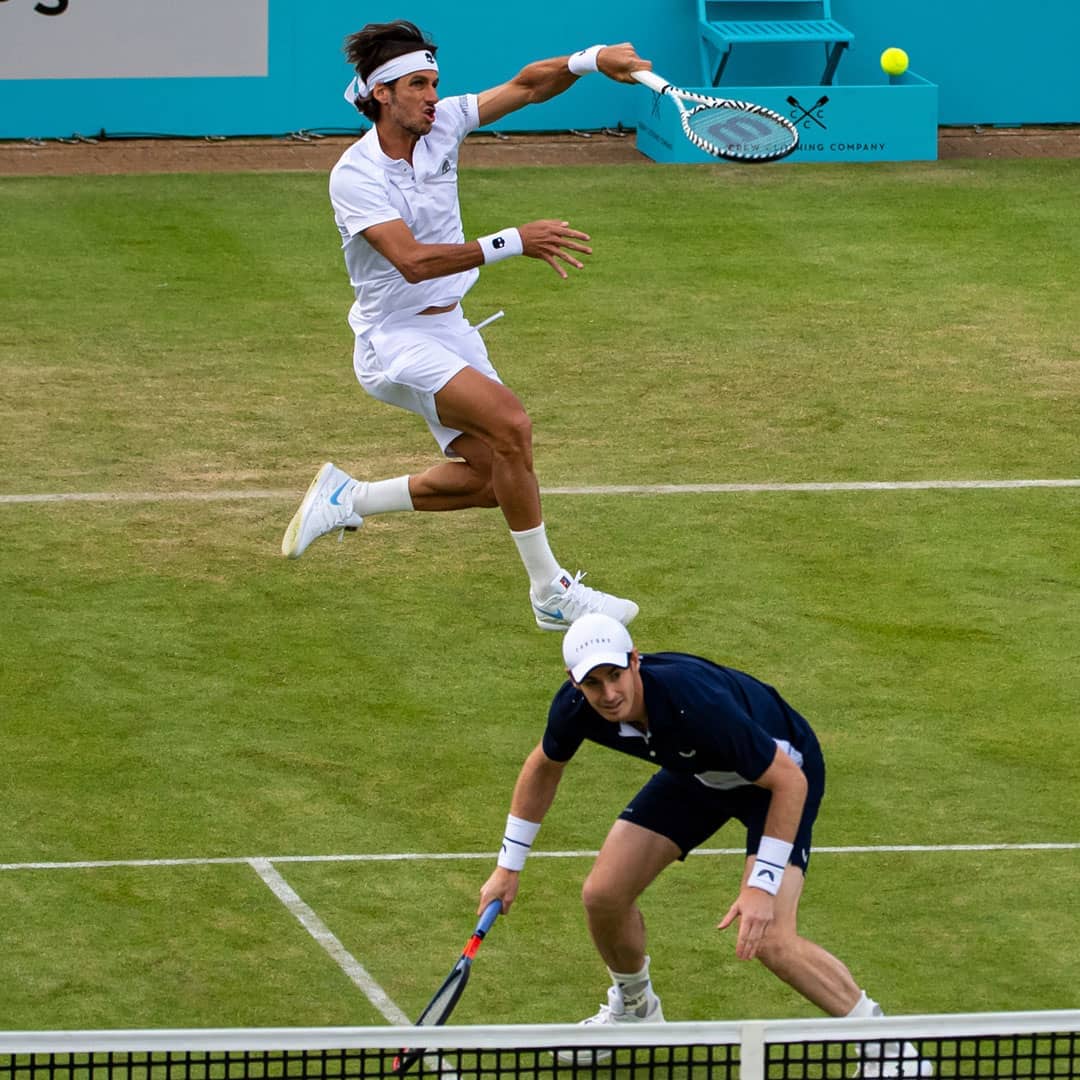 Murray also confirmed he will team up with Pierre-Hugues Herbert at Wimbledon. The Frenchman has focused on singles since completing the career doubles Grand Slam with Nicolas Mahut this year in Melbourne, but the opportunity to team up with the former World No. 1 was too good to pass up.

“He had said to my coach that he wasn’t going to be playing doubles at Wimbledon,” said Murray. “A couple of weeks ago, [he] got in touch, said maybe [he] would like to play. I’m asssuming he spoke with his team and thought it might be a nice thing to do.”

There were no break points in the opening set of Murray’s comeback match on Thursday. An incredible behind-the-back lob from Cabal helped bring the Colombian duo to 5/5 in the first-set tie-break, but Murray’s volley and forehand netcord winners in the next two points wrapped up the opening set.

The Brit grew in confidence as the match progressed. He ripped a pair of forehand return winners to secure the first break of the match at 3-2 in the second set. The slight advantage was all Lopez/Murray needed. Aggressive volleying from Lopez as he served for the match at 5-3 helped seal the win in 75 minutes.

You May Also Like: Felix Defeats Kyrgios In Queen’s Club Serve Showdown

The other seeded teams in action on Thursday had better fortune. Second seeds Mate Pavic and Bruno Soares rallied to defeat Lucas Pouille and Stan Wawrinka 5-7, 6-3, 10-5. They’ll play Rajeev Ram and Joe Salisbury for a place in the last four.

Third seeds Henri Kontinen and John Peers hung tough to defeat Robert Lindstedt and Artem Sitak 7-6(5), 3-6, 10-3. Next up for them are Jamie Murray and Neal Skupski, who delighted the home crowd by moving past French pair Nicolas Mahut and Edouard Roger-Vasselin 7-6(5), 1-6, 10-7.

Roger Federer held off some of Jo-Wilfried Tsonga’s best hitting to reach his 17thNOVENTI OPEN quarter-final on Thursday and keep alive his hopes for a record-extending 10th title in Halle.

Federer advanced past Tsonga 7-6(5), 4-6, 7-5 in another high-octane contest between the two veterans who both hit their full strides at times inside Gerry Weber Stadion. Federer now leads their FedEx ATP Head2Head series 12-6.

You May Also Like: Auger-Aliassime Defeats Kyrgios In Queen’s Club Serve Showdown

Tsonga had beaten Federer during their only prior grass-court meeting, coming back from two sets down in the 2011 Wimbledon quarter-finals. But the Swiss started well and looked to be en route to another straight-sets win in Germany after he converted his third set point in the opener and broke to start the second.

The top seed ran around a Tsonga second serve and belted an inside-in forehand winner down the line to gain the set and break lead. He was at his aggressive best all match, coming forward often and ending the point with swinging volleys. Federer won 16 of his 27 trips to the net (59%).

But Tsonga found his characteristic big groundstrokes in time to break in the sixth and 10th games of the second set, punishing forehands that Federer couldn’t handle at net. The two were on serve until the 11th game of the deciding set, when Federer, as the fans screamed for the nine-time champion, raised his level to break once more. He ended their 18th contest with his seventh ace.

The Swiss will next meet Spain’s Roberto Bautista Agut, who beat two-time Wimbledon semi-finalist (2007, 2015) Richard Gasquet of France 6-1, 6-4. Federer is 8-0 against Bautista Agut, which includes a straight-sets win at 2015 Wimbledon, their only grass-court encounter. Bautista Agut has won only one of their 19 sets.

Did You Know?
Only 23 men in 20 years have beaten Federer on grass and only two have done so from two sets down at Wimbledon (2-78). Tsonga belongs to both of those clubs.

World number one Naomi Osaka followed up her early French Open exit with a shock second-round loss to Kazakhstan’s Yulia Putintseva in Birmingham.

Roland Garros champion Ashleigh Barty, 23, may soon replace Osaka at the top after reaching the quarter-finals.

The Mallorca Open was 32-year-old Russian Sharapova’s first tournament since she withdrew from a second-round match at the St Petersburg Ladies Trophy in January.

Barty beat American Jennifer Brady 6-3 6-1 and is now close to taking the world number one ranking from US Open and Australian Open champion Osaka, who was beaten by unseeded Czech player Katerina Siniakova in the French Open third round.

Osaka would have stayed top if she had reached the final in Birmingham, but if Barty wins the title she will become world number one.

“The stars have aligned a little bit for me and I think when you get those opportunities you have to do your best to take them with both hands,” said Barty, who has now won nine matches in a row.

The Birmingham Nature Valley Classic and Mallorca Open are grass-court tournaments which take place in the run-up to Wimbledon.

Russian celebrated in Halle for his milestone

Karen Khachanov has been rewarded for his outstanding form in more ways than one. The 23-year-old Russian cracked the Top 10 of the ATP Rankings this month and now has the award to go with it.

The World No. 9 received the ATP Award for reaching the Top 10 on Thursday at the NOVENTI OPEN. Khachanov, seeded third, is through to the quarter-finals in Halle after wins over Miomir Kecmanovic and Jan-Lennard Struff.

Khachanov’s outstanding finish to 2018 included his first ATP Masters 1000 title at the Rolex Paris Masters (d. Djokovic) and a title on home soil at the VTB Kremlin Cup (d. Mannarino). He has continued to excel in Masters 1000 events, reaching the semi-finals last year at the Rogers Cup and quarter-finals this March at the BNP Paribas Open. Khachanov also advanced to his first Grand Slam quarter-final this month at Roland Garros.

You May Also Like: Khachanov Wins Battle Of Big Hitters In Halle

Argentine slipped in his first-round match on Wednesday in London

Juan Martin del Potro will undergo yet another surgery. The Argentine announced on Thursday that he has again fractured his right patella, the same injury that made the 6’6″ right-hander miss the last four weeks of the 2018 season and has limited him to only five tournaments so far this year.

Del Potro slipped near the net in the eighth game of the second set of his first-round match with Denis Shapovalov at the Fever-Tree Championships on Wednesday. Although the Argentine went on to advance in straight sets, he underwent medical exams after noticing pain and swelling in his right knee.

Watch: Up Close & Personal With Delpo

Further tests on Wednesday night in a London clinic showed that Del Potro had again fractured his right kneecap.

He originally broke his patella last October at the Rolex Shanghai Masters and had to miss the final three weeks of the season, as well as the season-ending Nitto ATP Finals in London. 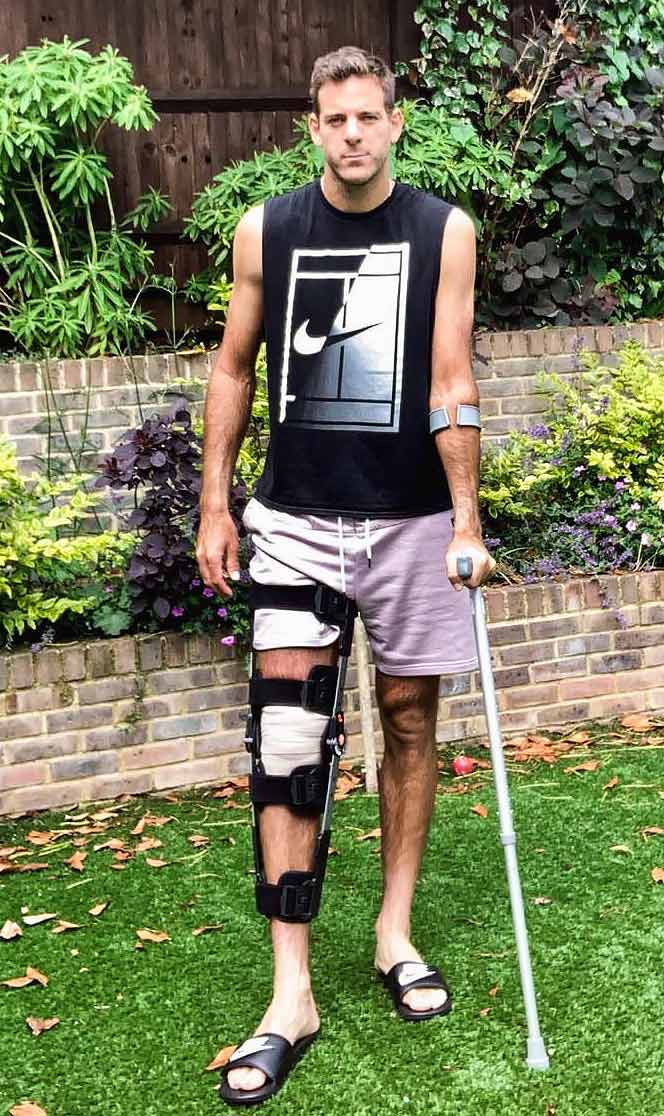 Del Potro, however, rehabbed his knee, as seen in the exclusive video above, and returned close to top form this year. He had match points against No. 1 Novak Djokovic in the Rome quarter-finals and made the fourth round at Roland Garros (l. to Khachanov).

You May Also Like: Read & Watch: Del Potro Gets Personal In ‘The Road To London’

After the further tests in London, though, Del Potro consulted with his doctor, Angel Cotorro, and they determined that he will need surgery, which will take place in the next couple of days with a date and location to be determined.

Queen's: Kyle Edmund loses to Stefanos Tsitsipas in first round

Britain’s Kyle Edmund was knocked out of Queen’s 6-3 7-5 in the first round by Greek top seed Stefanos Tsitsipas.

Trailing 6-3 3-3 when bad weather ended play on Wednesday, Edmund was unable to turn the match around on Thursday as British interest in the singles ended.

Edmund, 24, saved six match points but the Greek clinched victory with a backhand down the line.

Murray, 32, is making his return to tennis alongside Spain’s Feliciano Lopez after five months out following a hip operation.

The pair’s match against Colombia’s Juan Sebastian Cabal and Robert Farah is the fifth match on centre court at the Fever-Tree Championships in London.

Edmund was making his competitive return after retiring from the French Open with a knee injury earlier this month.

The Yorkshireman did not look his sharpest in the first set on Wednesday as he struggled to cope with Tsitsipas’s power and precision.

Flashes of sunshine greeted them when they returned on Thursday lunchtime as Edmund looked to make a quick start.

The world number 30 was unable to convert a break point in the seventh game and it proved costly when Tsitsipas eventually ended his resistance by taking his seventh match point when a Hawk-Eye replay showed his backhand had just clipped the line.

Defending champion Marin Cilic was a surprise second-round casualty at the Fever-Tree Championships.

Argentine Schwartzman, 26, secured early breaks in both sets to wrap up only his third career win on grass.

Second seed Kevin Anderson, who beat Britain’s Cameron Norrie in round one, lost in three sets to France’s Gilles Simon.

The big-serving South African, last year’s Wimbledon runner-up, has missed most of the season because of an elbow injury and his rustiness told as Simon ran out a 6-1 4-6 6-4 winner.

Organisers have a packed schedule to get through on Thursday after Tuesday’s play was washed out and only a handful of matches were completed on Wednesday.

Three first-round matches were still to be completed at the start of play on Thursday.