Uncovered: Behind The Scenes In Marseille

Uncovered: Behind The Scenes In Marseille

Londero improves to 7-2 this season

On his debut at the Brasil Open, Jaume Munar needed just 66 minutes to defeat Pedro Sakamoto 6-3, 6-2 on Tuesday.

The 2018 Next Gen ATP Finals semi-finalist, who is bidding to reach his fifth ATP Tour quarter-final of the season this week, converted each of his four break-point chances to reach the second round. Brazilian qualifier Sakamoto was making his ATP Tour debut after defeating former World No. 37 Carlos Berlocq en route to the main draw.

Munar will be aiming to earn his 10th tour-level victory of the season when he meets Christian Garin of Chile in the second round. Garin claimed a first-round win for the third straight week on the ATP Tour on Monday, beating Pedro Sousa of Portugal 7-6(3), 6-2.

Cordoba Open champion Juan Ignacio Londero joins Munar in the second round. The seventh-seeded Argentine dropped only three points behind his first serve (35/38) to defeat Paolo Lorenzi 7-6(3), 6-1. Londero will meet Hugo Dellien of Bolivia for a place in the quarter-finals. Dellien cruised past Spanish qualifier Pedro Martinez 6-1, 6-2 in 61 minutes.

Londero entered the Cordoba Open earlier this month without a tour-level victory. The Argentine has won seven of his nine matches on the ATP Tour since arriving in Cordoba.

Kei Nishikori continued his impressive start to the season on Tuesday, beating Benoit Paire 6-4, 6-3 on his debut at the Dubai Duty Free Tennis Championships.

The top seed, who has reached the quarter-finals or better in each event he has played this season, saved all eight break points he faced to advance after 81 minutes. Nishikori is aiming to capture his first ATP 500 title in more than three and a half years. The Japanese lifted his most recent title at this level at the 2015 Citi Open (d. Isner).

“[It is] never easy playing Benoit,” said Nishikori. “[He has a] great serve [and a] great backhand… I think the key was the longest game at 2-1 [in the first set]. [I was] able to get the game. I was more confident. If he broke back, anything [could have] happened. It was a good match.”

Nishikori improves to 12-2 this season after notching his sixth victory in eight FedEx ATP Head2Head meetings against Paire. The 29-year-old will meet 2018 Next Gen ATP Finals qualifier Hubert Hurkacz in the second round. Hurkacz beat #NextGenATP Frenchman Corentin Moutet 6-3 7-5 in 78 minutes.

In a highly competitive opening four games, Nishikori saved eight break points and converted his only break opportunity en route to a 3-1 lead. After maintaining his advantage, Nishikori found himself 0/30 down when serving for the set at 5-4. But the 29-year-old took advantage of loose errors from Paire to reach set point, before moving to the net behind a drop shot and striking a forehand volley into the open court.

After struggling with pain in his right knee, Paire gifted Nishikori a break of serve at 2-2 as he attempted to shorten points. Nishikori moved well throughout the set, chasing down balls from his opponent to extract errors and claim victory.

Nishikori also took time to discuss his recent visit to the Flying Cup, where he enjoyed the sights of the city from above. But the Japanese No. 1 has his mind set on going much higher in Dubai, by visiting the world’s tallest building; the Burj Khalifa.

Watch Kei Test His Nerve At The Flying Cup

“[Visting the Flying Cup] was really fun. [I was] able to see a beautiful beach. I want to go to the [Burj Khalifa]… This is a beautiful city. [There are] not too many times I [will be] able to go that high.”

“I was feeling good today. [I am] really happy with my game today,” said Berankis. “I was able to [execute] the whole plan, what I was planning to do before the match… The plan was to stay as close as possible and not to get in his game, which is to get into those long rallies which he loves.”

Medvedev was aiming to build on a strong start to the season, which has seen the 23-year-old reach championship matches in Brisbane (l. to Nishikori) and Sofia (d. Fucsovics). The four-time ATP Tour titlist owns a tour-leading 14 wins this season (14-4).

Berankis will meet Denis Kudla for a place in the quarter-finals. The American defeated Denis Matteo Berrettini of Italy 2-6, 7-5, 7-5 in one hour and 52 minutes.

Federer Looks Back On Success In Dubai

Federer Looks Back On Success In Dubai

Boulter, ranked 85th in the world, won in one hour and 26 minutes.

She edged ahead against the qualifier in the 10th game of the first set, winning it with her second break point.

Perrin saved match point at 5-5 in the second, but two games later 22-year-old Boulter made sure at the second attempt to win the match.

Boulter will face either American Sofia Kenin or Sweden’s Rebecca Peterson in the next round.

The trophy at the season’s first ATP 500 eluded Stan Wawrinka, but the Swiss looks in the mood for more hardware hunting at the Abierto Mexicano del Telcel presentado por HSBC in Acapulco.

Wawrinka, swinging freely from both wings, dismissed American qualifier Ryan Harrison 6-4, 7-6(6) on Monday, overcoming a dip in play midway through the second set to advance in straights at the ATP 500.

You May Also Like: Scouting Report: 30 Things To Watch In Acapulco, Dubai & Sao Paulo

The Swiss broke to start both sets, but Harrison leveled the second set in the eighth game by converting his first break-point chance. In the tie-break, the American saved a match point at 5/6, but a mishit forehand gave Wawrinka a second opportunity, which he clinched with his 26th winner.

The 33-year-old reached the final at the ABN AMRO World Tennis Tournament in Rotterdam earlier this month, falling to Frenchman Gael Monfils. It was his first tour-level final since 2017 Roland Garros, when he lost to Rafael Nadal.

He could face the Spaniard in the quarter-finals this week in Mexico. Nadal opens against Germany’s Mischa Zverev on Tuesday evening. Wawrinka will next face seventh seed Steve Johnson, who beat Mexican wild card Gerardo Lopez Villasenor 7-5, 7-5.

At the age of 17, Jannik Sinner is the youngest player from Italy to win an ATP Challenger Tour title

The streak lives! For the seventh year in a row, a 17-year-old has lifted a trophy on the ATP Challenger Tour.

On Sunday, it was Italy’s Jannik Sinner who provided the latest fireworks, surging to his maiden title on home soil in Bergamo. Born in the town of Innichen, located along the Italian-Austrian border, Sinner marched to the title on the indoor hard courts of the Trofeo Faip-Perrel.

With the Next Gen ATP Finals getting ready for a third edition in Milan from 5-9 November, the Italian contingent has a strong contender to punch his ticket. Not only did Sinner clinch his first professional title, but he became the youngest Italian to triumph in ATP Challenger Tour history. He routed countryman Roberto Marcora 6-3, 6-1 for the title on Sunday.

Sinner’s run to the title is remarkable considering it was just his fourth Challenger main draw appearance. He became the youngest player in the Top 500 with the victory, vaulting 222 spots to a career-high No. 324 in the ATP Rankings.

The Italian spoke to ATPChallengerTour.com after lifting the trophy…

Jannik, congrats on winning your first Challenger title. How does it feel to lift the trophy?
It really felt amazing. I can’t describe my emotions. I came to Bergamo very relaxed and didn’t think about winning the tournament. But I knew I had the level to be able to play with everyone. Round-by-round I played very well. I’m so happy!

It was an amazing week for you, winning six matches against very good opponents. How did you do it?
Last year I had a mental block against Top 500 players. I couldn’t beat one. Here in Bergamo it was the first time, then after the first round I felt very good. I just trained only an hour before the first match. I asked to play on Tuesday, but I had good feelings right away and I’m very happy.

To win your first title is special, but to do it at home is even better. How did the crowd help you this week?
I have to say that the public has helped me a lot. I like to play in front of a lot of people and when I come out of the tunnel it’s a good feeling. It loads you with energy. They helped me a lot. 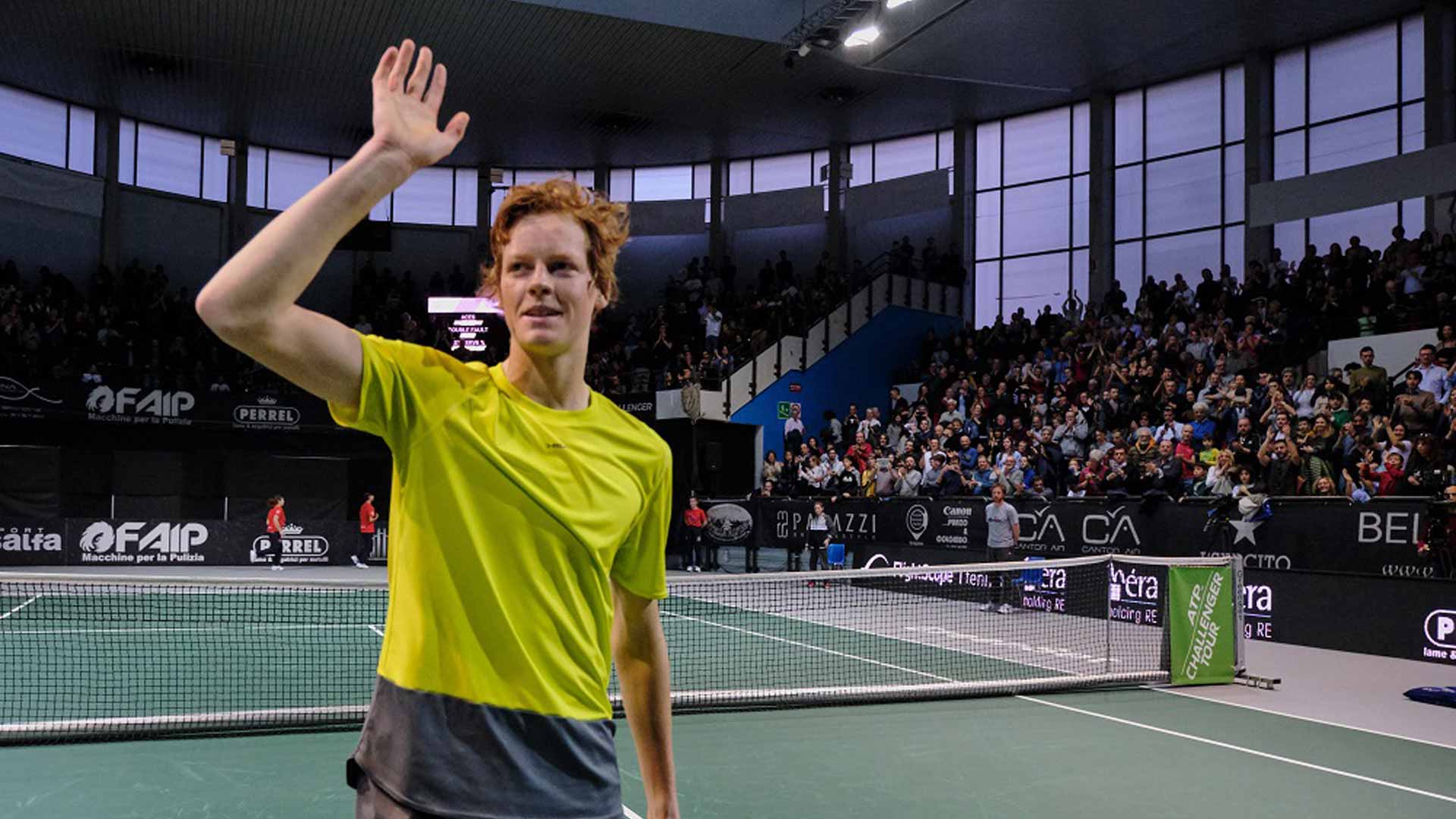 What did you enjoy most about Bergamo in your first time playing here?
I like the city a lot. Even outside it’s all very simple. I really like centre court because it is surrounded by the stands. Then when it’s full it’s a nice thing to play here.

You are the youngest Italian to win a Challenger title in history. What does that mean to you?
Honestly, I didn’t even know. During the warm-up the speaker said it, but I was calm, I had not thought about it. I am very happy to have won.

This was just your fourth Challenger main draw. Did you expect this success to come so quickly?
I knew I could go to the last stages and get this level. I didn’t think about winning. When I won the third round against Salvatore Caruso, who is a very solid player, I thought about it. I knew that there are many players who win their first title at a young age, so that gave me confidence.

How important was your preseason training? What did you and your team work on?
The preparation for me is very important. We worked on tennis, but also on the physical part in the gym. There were days when I only did physical work. I think everything started from there, then I went to Tunisia with the wrong mentality and I had a bit of confusion in my head. Now I found myself and I hope to continue in this way.

Going from juniors to Futures to Challengers is a difficult transition. How tough is the competition at this level?
At the beginning it’s difficult, especially on the mental side. Playing juniors didn’t interest me very much and I always wanted to make ATP points. These are important points and I hope I will get into other Challenger tournaments. Now I have a lot of confidence.

Who is your role model? Is there any player that inspires you? Why?
For us, in South Tyrol, the idol is Andreas Seppi, the first one to have done something important in tennis. But now I would like to do better than him. My idols are big names like Federer and Djokovic. I would like to arrive like them and not just among the Top 30. Seppi has done great things, but I hope to go even further.

For those of us who don’t know much about you, tell us something. What do you enjoy doing off the court? Do you have any passions outside of tennis?
First of all, skiing when I’m at home, in winter. I like doing everything, playing football and moving around a lot. I enjoy being outdoors and I don’t like to remain inside. I also prefer to watch movies at home because it’s quieter, even if it’s sometimes with friends. I think I’m a very normal person like this.

You are in contention to qualify for the Next Gen ATP Finals in Milan. How cool would it be to get there?
For the moment I don’t think about it. The season is still very long, things can change. Last year I was there, I played the Red Bull sponsored tournament and I could see how it works with the new rules. It is very stressful, with deciding points and shorter sets, but it would be great to be there.