Father and coach of Stefanos Tsitsipas, who beat Federer on Saturday, excels despite his unconventional path into tennis

Based on his childhood, it’s far more likely that Apostolos Tsitsipas would be coaching the Greek national football team than the country’s global tennis star, his son and World No. 6 Stefanos Tsitsipas, who beat six-time champion Roger Federer on Saturday to reach the title match of the Nitto ATP Finals in London.

Apostolos and his brother goofed around on a nearby, self-maintained “grass court” with wooden racquets as kids, but, growing up, Apostolos’ sports were football and basketball. He briefly competed on the Greek national football team.

As a sport science major at the University of Athens, he specialised in tennis for reasons that still elude him.

“It was strange because nobody from my background was involved in tennis,” he told ATPTour.com. “But I chose tennis, I don’t know why. Actually, that’s a good question.”

Rare is the coach of a top player who didn’t compete on the ATP Tour or at least collegiately in the U.S. Although they weren’t all household names as players, all but three coaches of the eight Nitto ATP Finals qualifiers earned ATP Ranking points during their playing days.

Coaches Of The Top 10 Players In The ATP Rankings

The former players turned coaches have been there done that and can offer experience as a top asset. But others, including Apostolos, have shown that playing inside The O2 in front of roaring crowds is not a prerequisite to leading a player into the Top 10.

Apostolos, along with his wife, Ioulia Salnikova, a former Top 200 WTA player, started teaching Stefanos tennis at the age of three. Dad focused on technique – his one-handed backhand, taking the ball early – and Mom on discipline, “Always do your best.”

When Stefanos was 12, Apostolos joined his son as his full-time coach, travelling with him to junior events across the world, and that’s where Apostolos remains today, in his son’s coaching box, the gray-haired father of four applauding and encouraging his 21-year-old son.

“It’s a big honour to have him next to me by my side,” Stefanos said. “I love him. He loves me. We have been together since the age of 12, travelling together. I appreciate that.”

When Apostolos was 20, in his third year at the University of Athens, he had only just decided on tennis as his sport. Three years later, at the age of 23, he played in his first tennis tournament of any kind, the Greek championships.

From there, his tennis coaching took him across the world. Apostolos travelled for two years with loulia on the WTA and studied tennis coaching for three more years in Vienna and Berlin in the early 1990s, during the the golden period of German tennis, when Boris Becker and Steffi Graf were at the top of the men’s and women’s games.

But his growing family of four required a more stable life, so he accepted a job as a country club teaching pro in Athens. Apostolos, armed with seven years of coaching education and a decade of recreational playing experience, tried to teach more than wins and losses to his players and their families. When the parents would want more wins, he’d ask for more time.

Years later, however, when Stefanos told his father he was ready to take tennis more seriously, Apostolos finally met a parent he could reason with: himself. 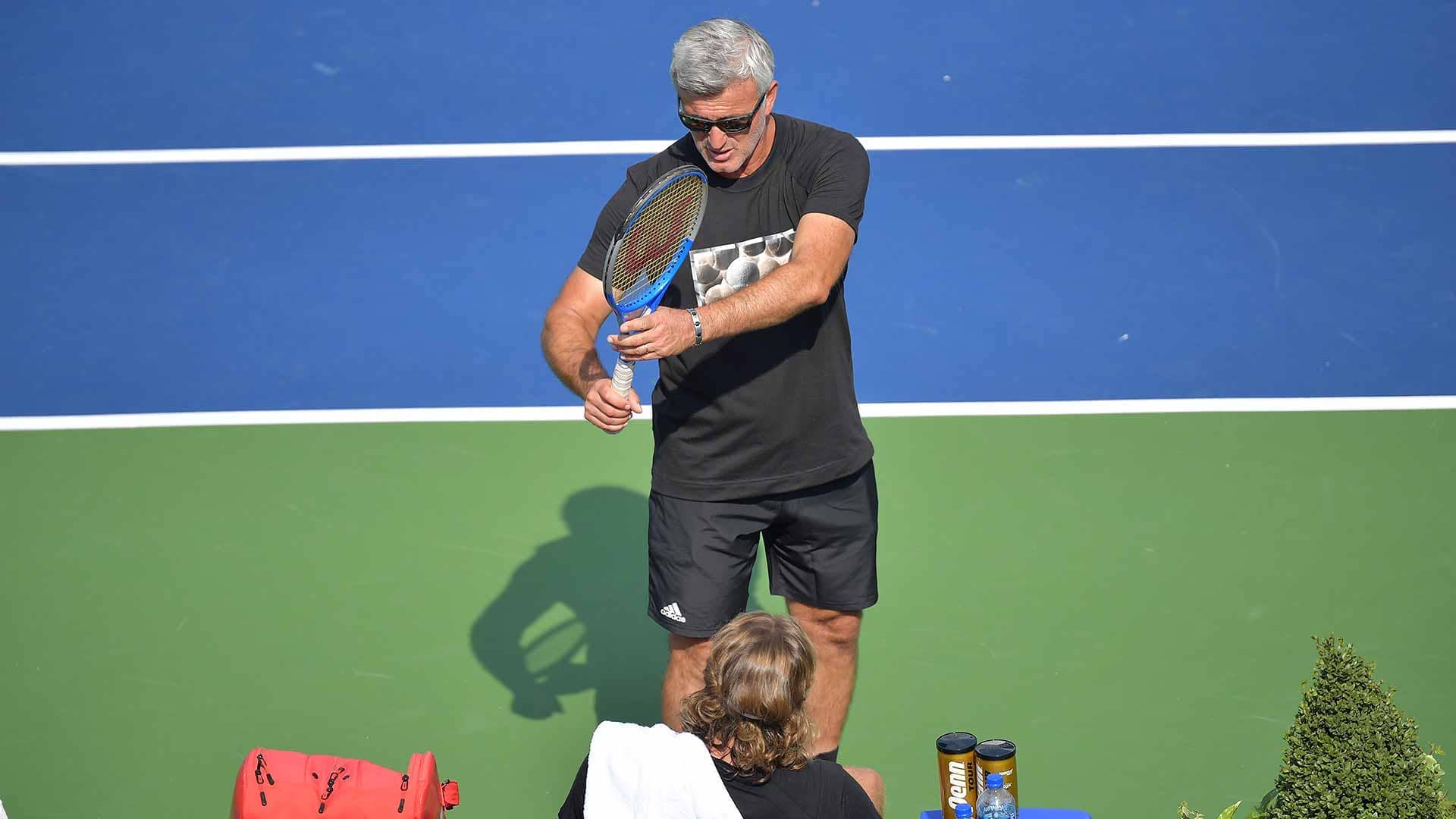 The two have been travelling together for nine years, with Apostolos helping Stefanos climb 76 spots in the ATP Rankings last year (91 to 15), and this year, the Greek has completed the Milan to London transition, from winning the 2018 Next Gen ATP Finals title to playing in the title match of the 2019 Nitto ATP Finals in London.

Despite guiding his son to unprecedented achievements in Greek tennis history, Apostolos doesn’t think of himself as the one making headlines. The father who has led his son every step of his career says that he feels fortunate his son has chosen him.

“With Stefanos, even though I studied so much, I just feel that I know very few things. You need to always be open-minded and ready to learn. Stefanos gave me such a chance to learn,” Apostolos said. “I think he was the best university for me.”

It’s a school of thought that can be rare among coaches of any sport, especially those at the top of their game. But, in this case, it sounds about right; it sounds like Apostolos Tsitsipas.