Dominic Thiem this week controls his destiny when it comes to qualifying for the Nitto ATP Finals for the fourth consecutive year. Thiem will book his return ticket to The O2 in London if he reaches the China Open final in Beijing.

The 23-year-old Austrian is currently in fifth place in the ATP Race To London, with 3,845 points, and next in line to qualify for the season-ending championships, to be held 10-17 November. The top four players in the Race – Rafael Nadal, Novak Djokovic, Roger Federer and Daniil Medvedev – have already secured their places. In Beijing, the top-seeded Thiem opens against Richard Gasquet, who leads their FedEx ATP Head2Head series 2-0.

Stefanos Tsitsipas, last year’s Next Gen ATP Finals champion, is in sixth place in the Race (3,160 points) and also will be looking to bolster his qualification prospects in China. The 20-year-old Greek is seeking his maiden London appearance and needs to make the semi-finals to be able to add any points to his Race tally. 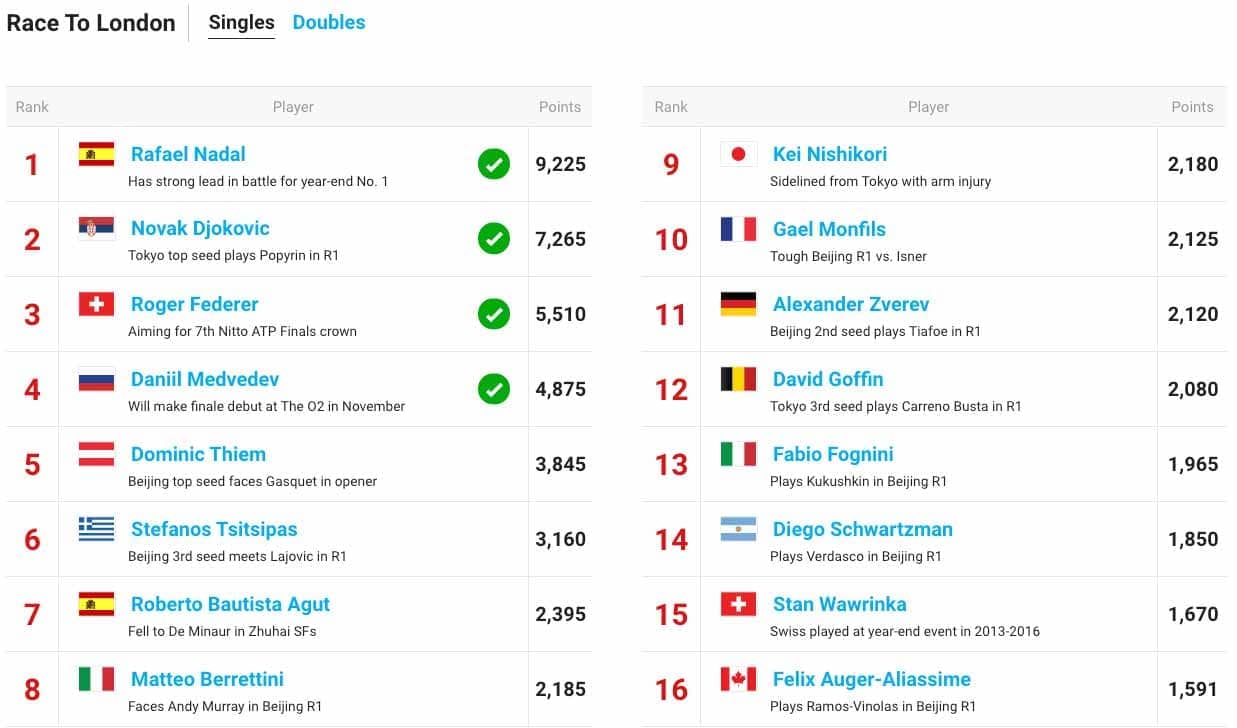 Only 315 points separate seventh place and 12th place in the Race, meaning plenty of players could make moves this week with 500 points up for grabs in Tokyo and Beijing, respectively.

Seventh-placed Roberto Bautista Agut (2,395 points) is the fifth seed in Beijing and faces American Sam Querrey. Bautista Agut is seeking his debut showing in London and will add Race points if he makes the quarter-finals.

Eighth-placed Matteo Berrettini (2,185 points) meets former World No. 1 Andy Murray in Beijing as the Italian looks to continue to build off his US Open semi-final run. Berrettini will add points to his Race tally if he beats Murray.

You May Also Like: ATP Rankings vs ATP Race To London: What’s The Difference?

Monfils faces John Isner in Beijing. The second-seeded Zverev, after beating Frances Tiafoe in his opener, will face #NextGenATP Canadian Felix Auger-Aliassime or Spain’s Albert Ramos-Vinolas in the second round. Zverev needs to make the quarter-finals to be able to improve his Race position.

And Goffin, the 2017 Tokyo champion, will play Chengdu Open champion Pablo Carreno Busta in round one in Japan. Goffin will add points if he beats the Spaniard.