The Secret To Matteo Berrettini's US Open Success

The Secret To Matteo Berrettini’s US Open Success

Matteo Berrettini and his team have not hidden their belief that the Italian’s work on his mental game has helped him enjoy the best season of his career, cracking the Top 20 of the ATP Rankings for the first time and now reaching his first major semi-final at the US Open. But behind that is a massive game with weaponry that can trouble anybody.

It all starts with one shot for the 23-year-old.

“For sure, my forehand is my best weapon,” Berrettini said.

The No. 24 seed has finished nine per cent of his points (111/1282) this tournament with a forehand winner, ranking 12th among the 128 players who competed in the main draw. No player placed ahead of him in that department is still alive at the US Open, and more than 44 per cent of his winners and 77 per cent of his baseline winners at the season’s final Grand Slam (111/250) have come off the forehand wing.

Berrettini began working with coach Vincenzo Santopadre about nine years ago, and he says that he has tinkered with Berrettini’s forehand technique less than any other stroke, and it’s not particularly close.

“I think sometimes he can play [his forehand] like this,” Santopadre said, putting his left hand over his eyes as if to say Berrettini can crush forehands with his eyes closed.

“It’s so natural,” Santopadre said. “But if you see a video of him playing when he was 15 or 16 on the forehand you can say, ‘Okay, this is Berrettini’ if you don’t see the face. But the serve and the backhand you say, ‘No, it was somebody else.’” 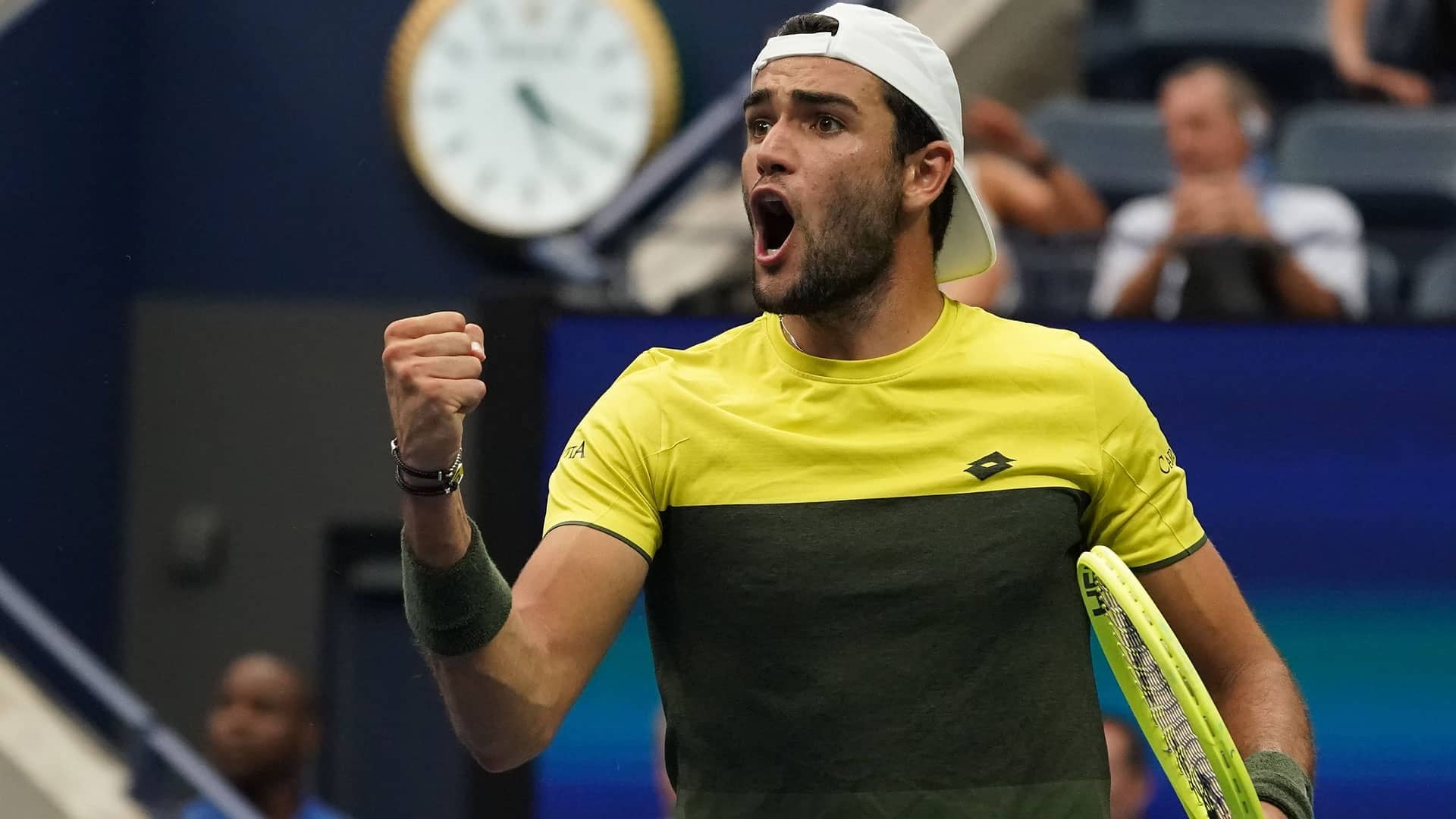 Berrettini’s toughest match of the tournament thus far was his five-set epic against Gael Monfils in the quarter-finals on Wednesday. Berrettini let slip his first of four match points he lost with a double fault. And in crunch time, he missed a few key backhands into the net. But at 5/4 in the fifth-set tie-break the Italian’s greatest strength rose to the occasion. Berrettini relentlessly attacked ball after ball with his forehand, which even the speedy Frenchman couldn’t handle, eventually allowing him to sprint into net to put away a forehand volley.

Another tough one for the Italian came against #NextGenATP Aussie Alexei Popyrin — a player with a similar game — in the third round, which went to a fourth-set tie-break.

“His forehand is good. When he’s got his position, he can hit it to both sides of the court and you can’t really read it. Usually, I can sort of read where the person is hitting, but with him I had difficulty reading it at the start of the match. And his serve is also a weapon,” Popyrin said. “When he comes in, he comes in well. He’s got a big presence at the net, so it’s not that easy to pass him. You see him coming in and you want to pass him from the first shot, so that’s why you do those mistakes that I did… his forehand is a weapon. His forehand is one of the best forehands I’ve played.

What Santopadre believes makes it a special shot is that it’s multi-faceted. Berrettini doesn’t rely on one type of forehand — an inside-in blast, for example — to finish or dominate points. He can pose a threat from everywhere on the court.

“It’s good because he can put so much power and [make it] so much heavy and so much spin to the ball that it’s really a tough ball to hit for the player who has to hit the ball. It’s complex [for them],” Santopadre said. “He has a very good forehand from every part of the court. There isn’t just one forehand. There’s a forehand on the right side, on the left side, from back, from behind. I think it’s really an unbelievable stroke because he could play from wherever and how he likes and he can hit winners everywhere.”

You May Also Like: Find Out What Has Spurred Matteo Berrettini’s 2019 Surge

As strong as his forehand is, Berrettini has anything but a one-dimensional game. Berrettini and his head coach note that his serve is his next biggest weapon. The three-time ATP Tour titlist — who has won two trophies in 2019 — has hit 66 aces, good for seventh at this year’s US Open.

Berrettini has won 78 per cent of his first-serve points, better than anyone who has played more than three matches at this event except for Rafael Nadal (79%), his semi-final opponent.

“I think I did also a great job with my backhand today. With the slice I was mixing well. I’m really proud of my tennis today,” Berrettini said after his victory against Monfils.

A power game and a devastating backhand slice don’t always go together. But when Berrettini was 17, he hurt his left wrist. So, for three months, all he was able to do was slice.

“Vincenzo, my coach, he used to play just slice, no spin at all, no topspin at all. I guess he knows how to teach slice,” Berrettini said, cracking a smile, after his fourth-round win against Andrey Rublev. “I’ve been working [on it] a lot. I’m practising a lot with Flavio Cipolla, a good friend of mine [who is] playing with unbelievable slice. I called him and said, ‘I was playing the slice like you today’, because I was feeling really well. Yeah, that’s the secret.”

More From Flushing Meadows
How Does Rafa Describe His Fighting Spirit?
Grigor: ‘It Was That Low I Don’t Even Want To Go There’
Monfils: ‘I Gave My Heart’ In New York Defeat

Craig O’Shannessy, who has been a part of World No. 1 Novak Djokovic’s coaching team, began working on analytics with Berrettini and the Italian’s team this year. And he also believes that is an important part of Berrettini’s game.

Overall, Berrettini, whose upper body isn’t all that different in build from Stan Wawrinka, is never going to back away from his own game plan. At Wimbledon, he played Roger Federer in the fourth round.

“I think I have the weapons to play my match and see what’s going to happen,” Berrettini said at the time.

Although he lost in straight sets, that mindset and those tools have helped Berrettini to enjoy the biggest tournament run of his career at Flushing Meadows.

“I’m going to use my weapons, for sure,” Berrettini said. “Normally I don’t adjust my tennis for others. I just think about myself, my serve, my forehand, then I start to think about others.”