Highest-ranked American to take on sixth seed Rublev next

In a clash between two of the biggest servers on the ATP Tour, it was the 11th seed Fritz whose delivery proved impenetrable in his 51-minute win at the ATP Masters 1000 event in Cincinnati. The American powered 16 aces and did not face a break point in his first tour-level meeting with Kyrgios, who received treatment on his knee from the physio during the match.

“It feels great to have [my] game come together today,” said Fritz, who improved his record at Masters 1000 tournaments this season to 15-3 with the win. “That’s the kind of match I really needed to give me a lot of confidence going into the next match, going to the US Open, a lot of things are clicking for sure.”

Fritz defeated Sebastian Baez in just 54 minutes in his opening match in Cincinnati, where he is now into the third round for the first time in five appearances. His opponent there will be 2021 finalist Andrey Rublev.

Fab Fritz ✌️ @Taylor_Fritz97 blasts past Nick Kyrgios 6-3 6-2 to reach the last 16 at #CincyTennis for the first time! pic.twitter.com/SOdIdVJJQt

After an opening five games largely dominated by serve, it was Fritz who carved out the only break point opportunities of the first set as the American capitalised on string of errors from Kyrgios to break for 4-2. Fritz, who did not drop serve once en route to his third ATP Tour title in Eastbourne in June, offered Kyrgios few opportunities to counter as he eased to the opening set.

As Kyrgios’ increased his speed of play and began to struggle with his knee, Fritz was clinical in racing to the second set by staying solid from deep and maintaining his precise serving. He wrapped up the win having won 86 per cent (30/35) of points behind his first delivery.

“I just focussed on myself,” said Fritz when asked about the speed of play in the second set. “He played with the servers pace… I tried to also play to his pace, if that’s the way he wants to play, it’s fine. I can control the pace on my serve, so all I was thinking was, ‘I’m up a break, just focus.’

“It feels good just to have the rest of the day to kind of relax and focus on the next match.”

INSIGHTS Conversion statistics for the match show how effective Fritz was in taking advantage of strong positions. The American won 76 per cent (19/25) of points when attacking, 16 per cent more than Kyrgios. 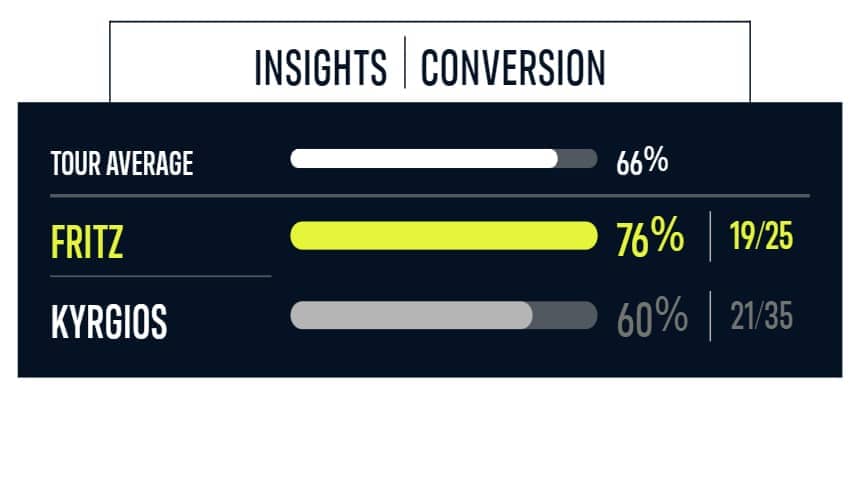 Rublev had earlier found a hot streak at just the right moment to grab the momentum in his second-round clash against Fabio Fognini. The World No. 8 reeled off five points in a row from 2/3 to clinch the second-set tie-break and force a decider, and Rublev took charge from that point on, breaking twice in the final set to complete a 6-7(7), 7-6(3), 6-2 victory.

The win moved Rublev into a 6-5 lead in his ATP Head2Head series with Fognini. The 24-year-old reached the final in Cincinnati in 2021, but he enters his third-round matchup with Fritz having fallen to the American at the Masters 1000 events in Paris last November and Indian Wells in March.