ATPTour.com looks back on memorable moments from Roland Garros

Roland Garros would typically make its mark at this time of year as the only Grand Slam to begin main draw action on Sunday. Although the tournament was moved this year to September because of the COVID-19 pandemic, there are still plenty of unforgettable memories to reflect on.

From Rafael Nadal’s first Grand Slam title to Andre Agassi, Roger Federer and Novak Djokovic completing their respective career Grand Slams, ATPTour.com looks back on some of the greatest moments of this event.

1968: A New Beginning
The 1968 Roland Garros tournament marked the first Grand Slam tournament of the Open Era and the first major championship that allowed professionals to compete against amateurs. The final featured an all-Aussie clash between top seed Rod Laver and second seed Ken Rosewall, who hadn’t competed in a Grand Slam since 1962 and 1956, respectively. Rosewall held off a mid-match comeback from Laver to prevail 6-3, 6-1, 2-6, 6-2 and lift his second title in Paris after a 15-year wait.

Laver would get revenge on his countryman the following year, scoring a convincing straight-sets win in the final en route to achieving the calendar-year Grand Slam. 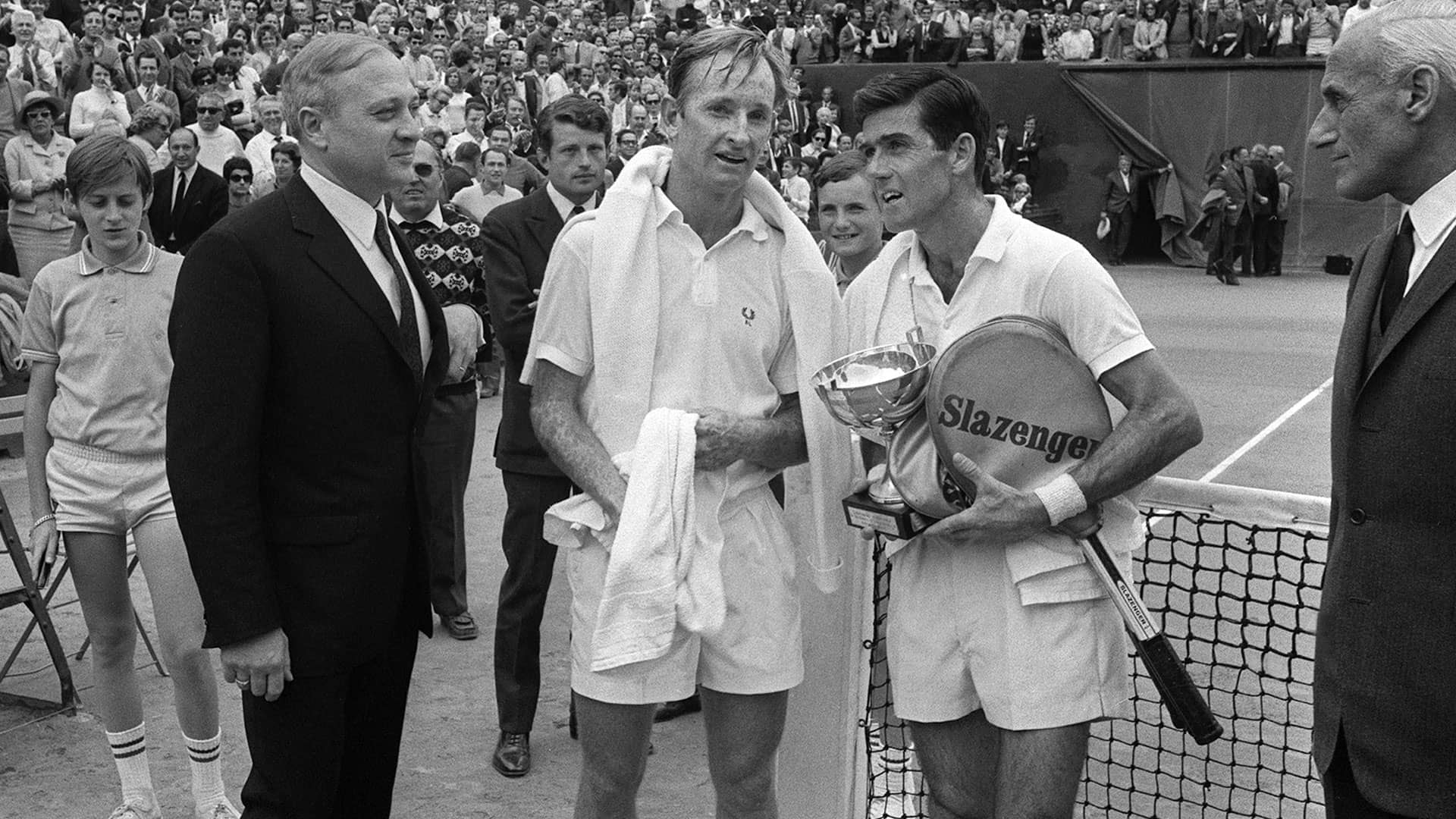 1974: Borg’s Breakthrough
Bjorn Borg made his Grand Slam debut at 1973 Roland Garros and turned heads by reaching the fourth round. The mellow Swede returned the following year and captured his first Grand Slam title, showing off supreme fitness by winning a pair of five-set matches to reach the final and rallying from two sets down to outlast Manuel Orantes 2-6, 6-7, 6-0, 6-1, 6-1. At 18 years, three months, he became the youngest male champion in tournament history at that time. 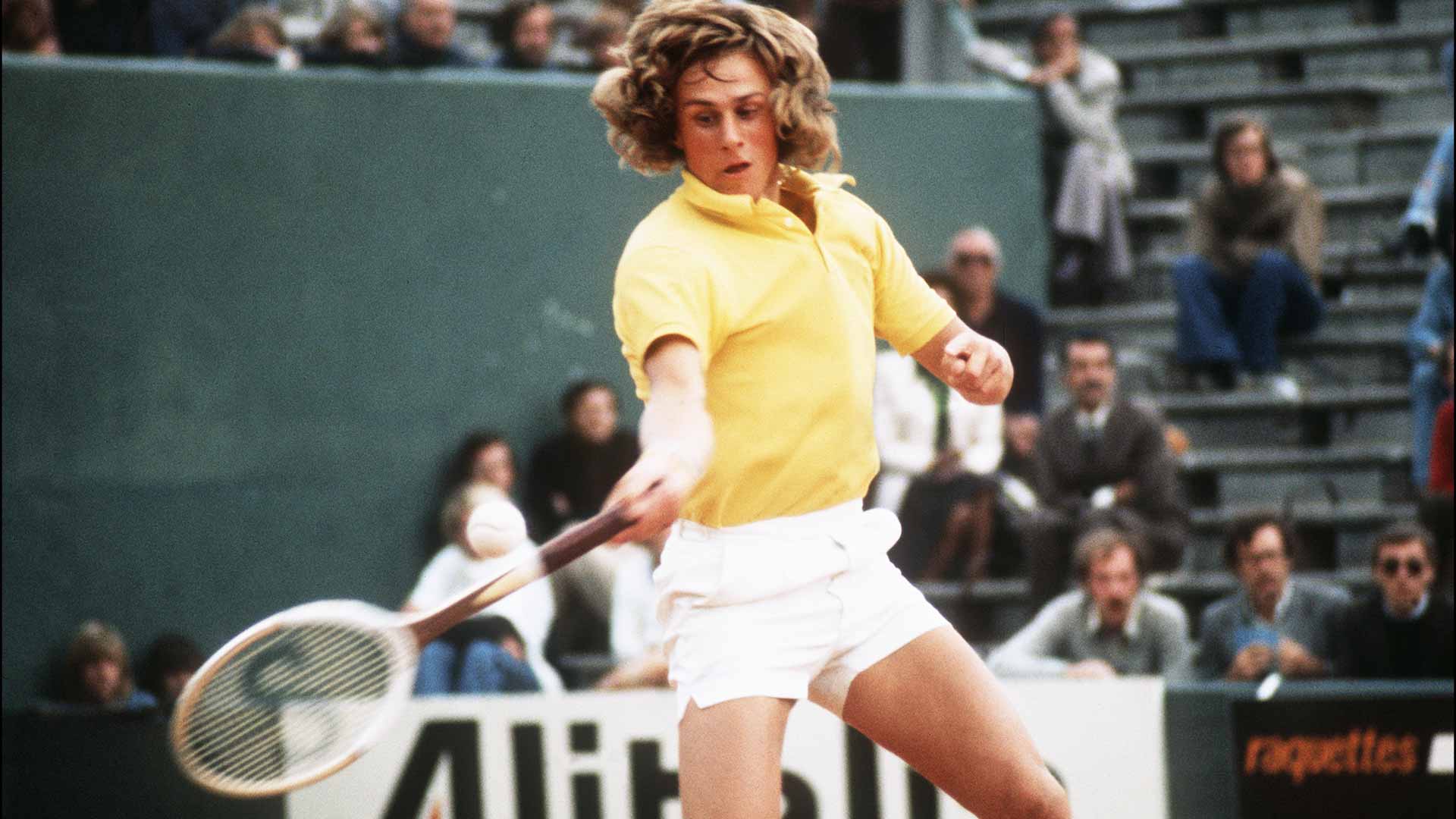 1989: Chang’s Historic Run
More than 30 years later, sports fans still talk about Michael Chang’s legendary match in Paris. Trailing by two sets and a break in his fourth-round clash against top seed Ivan Lendl, the 17-year-old American fought through intense cramps to level the match. Unable to use his legs while serving, he shocked the crowd and his opponent in the fifth set with a desperate underarm serve that proved successful. At match point, Chang moved up to within inches of the service line and rattled Lendl enough to produce a double fault.

Seven days later, Chang beat Stefan Edberg in a five-set thriller to become the youngest-ever male Grand Slam champion. Although it would remain his only major trophy, he enjoyed a long and fruitful career that saw him earn 34 tour-level titles and peak at No. 2 in the FedEx ATP Rankings. 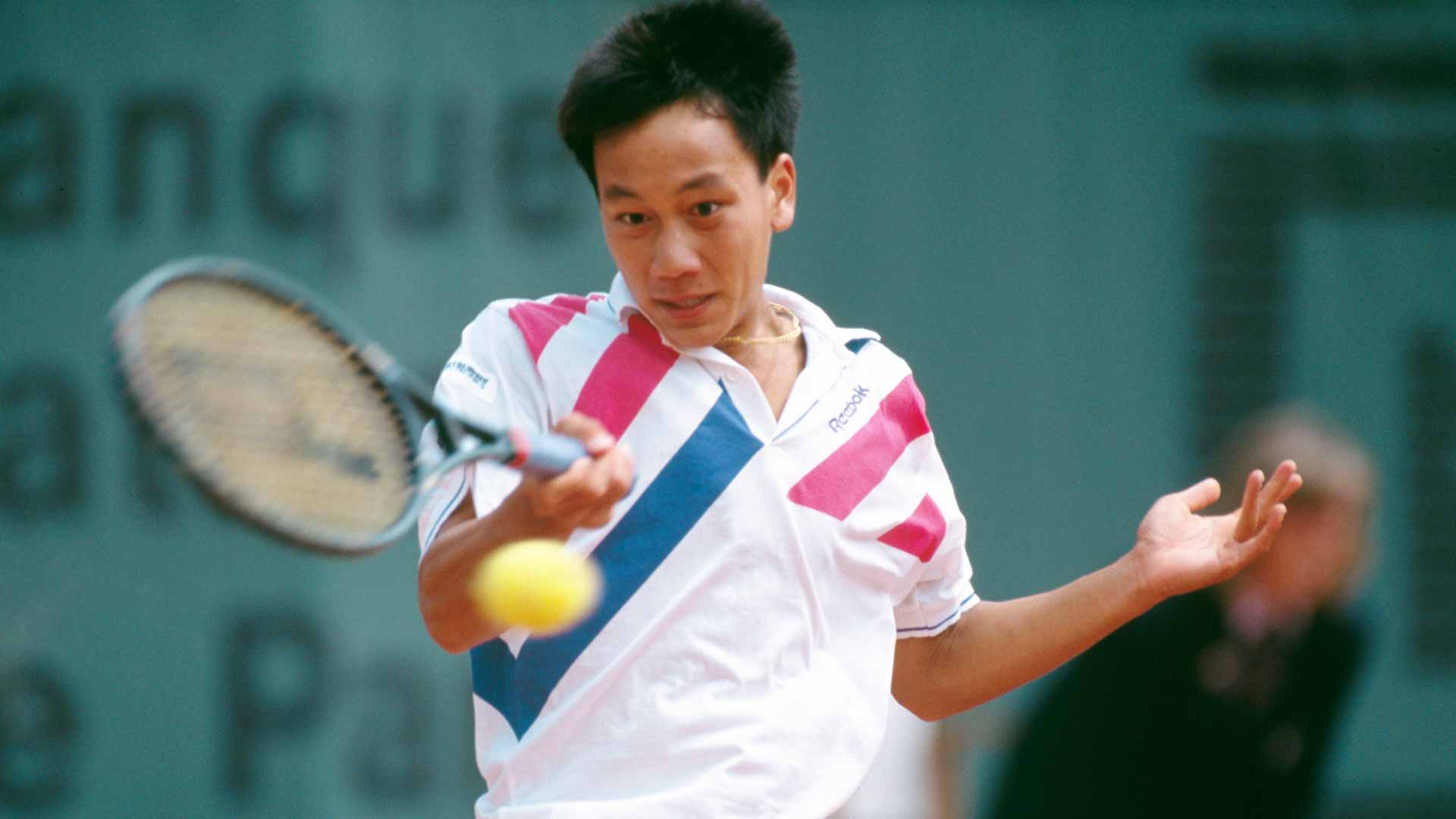 1997: Kuerten’s Fairyale
Gustavo Kuerten arrived at Roland Garros having played an ATP Challenger Tour event the week before. The unknown 20-year-old Brazilian, then No. 67 in the FedEx ATP Rankings, completed an improbable run by earning his first tour-level title at a Grand Slam. Kuerten took out former champion Thomas Muster and defending champion Yevgeny Kafelnikov en route to the final, then cruised past two-time winner Sergi Bruguera in the championship match.

It was the start of a love affair in Paris for the man affectionately known as “Guga”. Kuerten lifted the trophy twice more (2000-2001) and finished 2000 as year-end No. 1, cementing his status as one of the greatest South American players of all time. 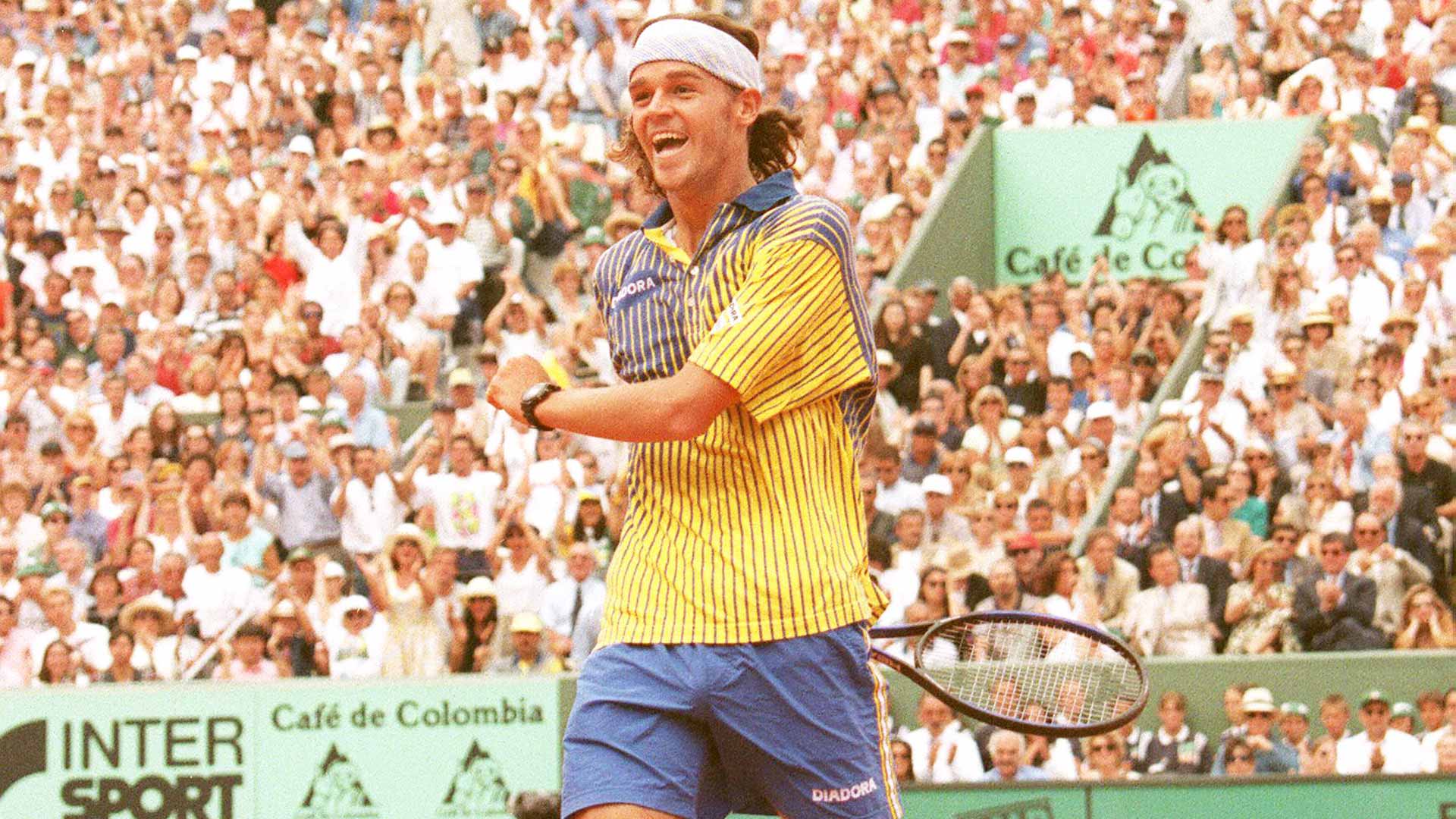 1999: Agassi Completes Career Grand Slam
Although Andre Agassi was a two-time finalist at this event (1990-1991), he had endured several early exits in Paris since then. There was little indication that the World No. 12 was a title contender in 1999 based on his play in the early rounds, but he worked his way into form and defeated defending champion Carlos Moya in the fourth round on his way to the final.

Agassi brought the crowd to their feet and himself to tears by rallying from two sets down to defeat Andrei Medvedev in the championship match. He became only the fifth male player at that time, and the second in the Open Era, to win all four Grand Slams. The American went on to win the US Open that year and finish the season as year-end No. 1 for the only time in his career. 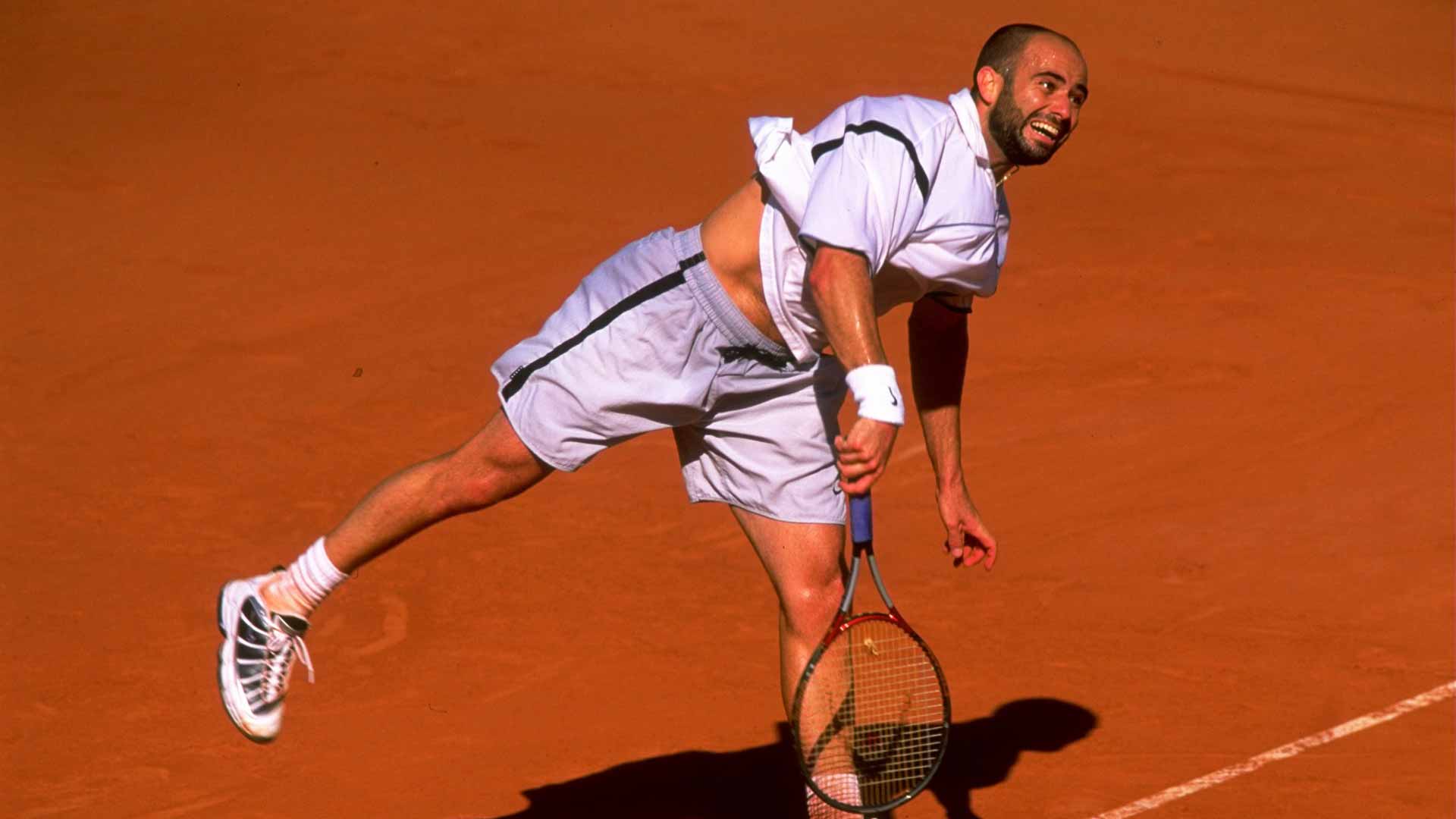 2005: Nadal’s Maiden Slam Title
A stress fracture in his left ankle prevented Rafael Nadal from making his Roland Garros debut the previous year, but he more than made up for it in 2005. The Spaniard arrived on a 17-match win streak, including Masters 1000 titles in Monte-Carlo and Rome, and celebrated his 19th birthday with a semi-final victory against top seed Roger Federer. Nadal defeated Mariano Puerta in the final, becoming the first teenager since Pete Sampras (1990 US Open) to win a major championship and joining Mats Wilander as the only male players to prevail In Paris on their first attempt. 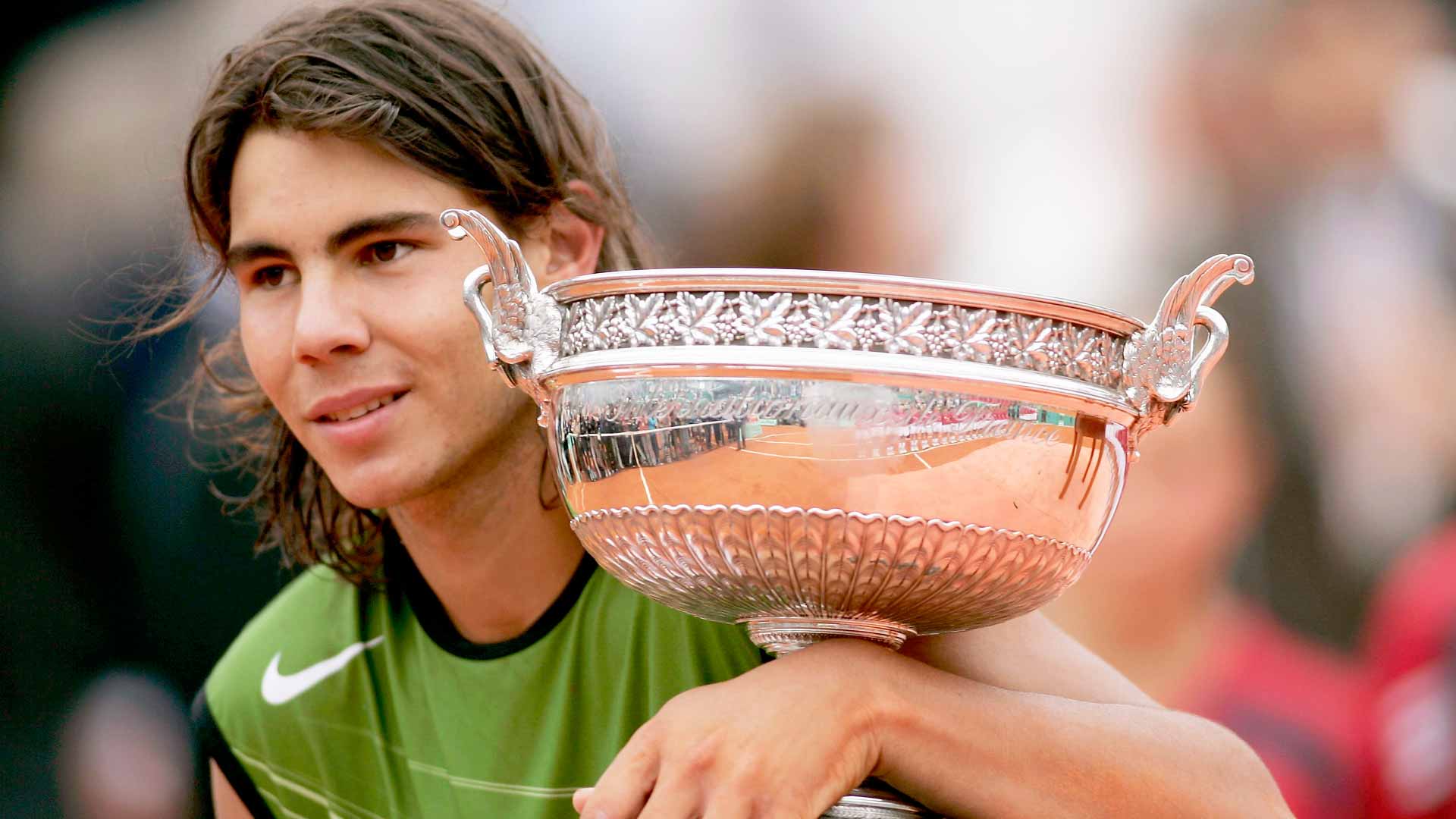 2009: Federer Completes Career Grand Slam
Like everyone else on Tour, Federer was unable to figure out how to master Nadal at Roland Garros. The Swiss lost to him four years in a row, including the 2006-2008 finals. But when Nadal suffered a shocking fourth-round defeat in 2009 to Robin Soderling, the Swiss seized his opportunity.

Federer fought back from two sets down in his quarter-final victory over Tommy Haas and rallied from two-sets-to-one down in his semi-final against Juan Martin del Potro. He saved his best for last by convincingly beating Soderling and became the third man in the Open Era to earn a Career Grand Slam. The milestone moment also tied him with Pete Sampras for the most Grand Slam singles titles (14) and he’d break the record one month later by triumphing at Wimbledon. 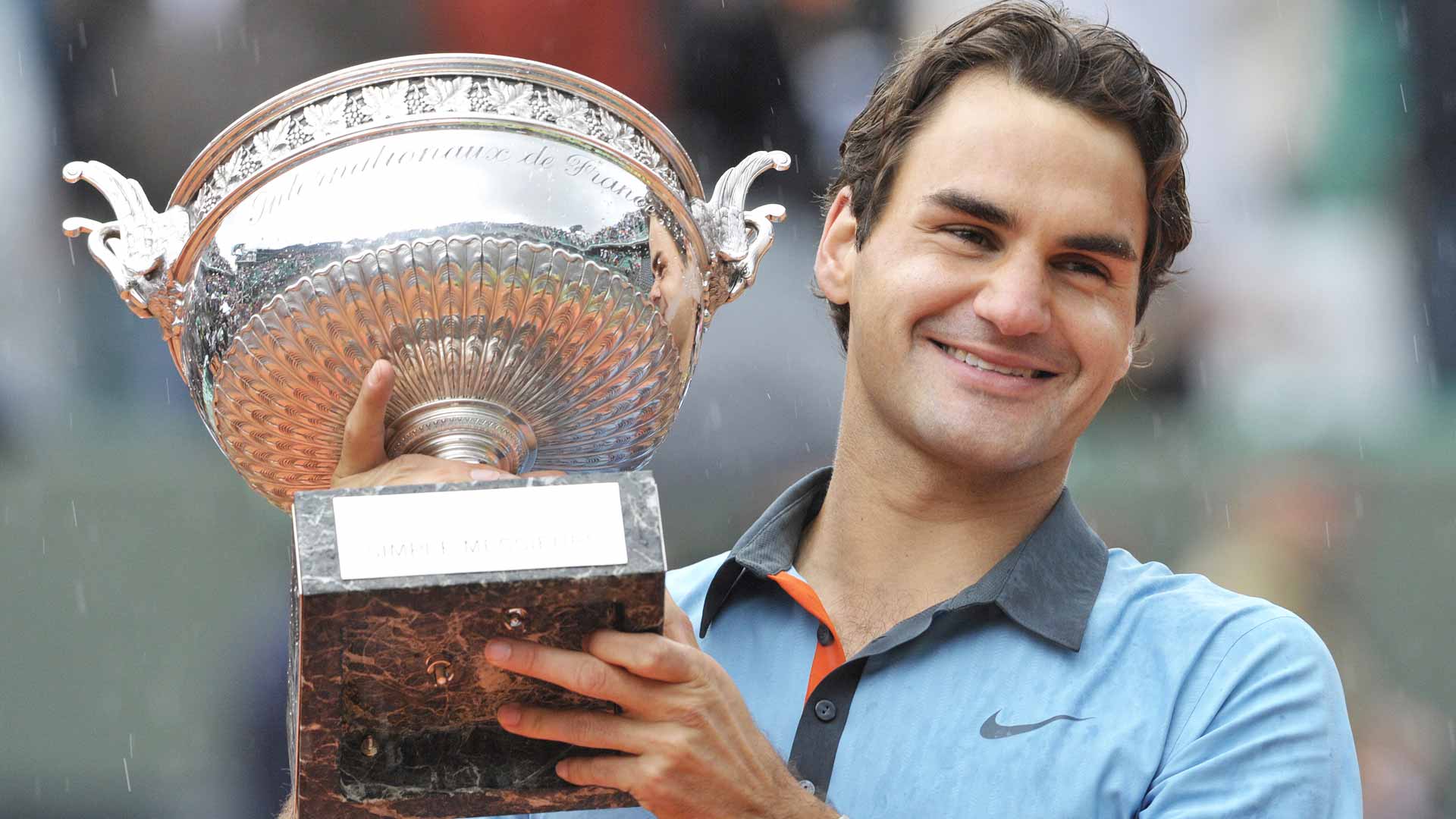 2016: Djokovic Completes Slam Collection
Novak Djokovic had eight clay-court Masters 1000 titles to his name and more success against Nadal on the surface than any player on Tour, but it hadn’t translated to a title in Paris. He finished runner-up three times (2012, 2014-2015), with 2015 being one of his most disappointing moments after stunning Nadal in the quarter-finals before losing to underdog Stan Wawrinka in the championship.

When Nadal withdrew prior to his third-round match with a wrist injury, Djokovic shined in the role of tournament favourite. The Serbian cruised into the final and defeated Andy Murray in four sets to complete his Career Grand Slam. He also became the first man since Laver (1969) to hold all four majors at once and the only man in history to achieve the feat on three different surfaces. 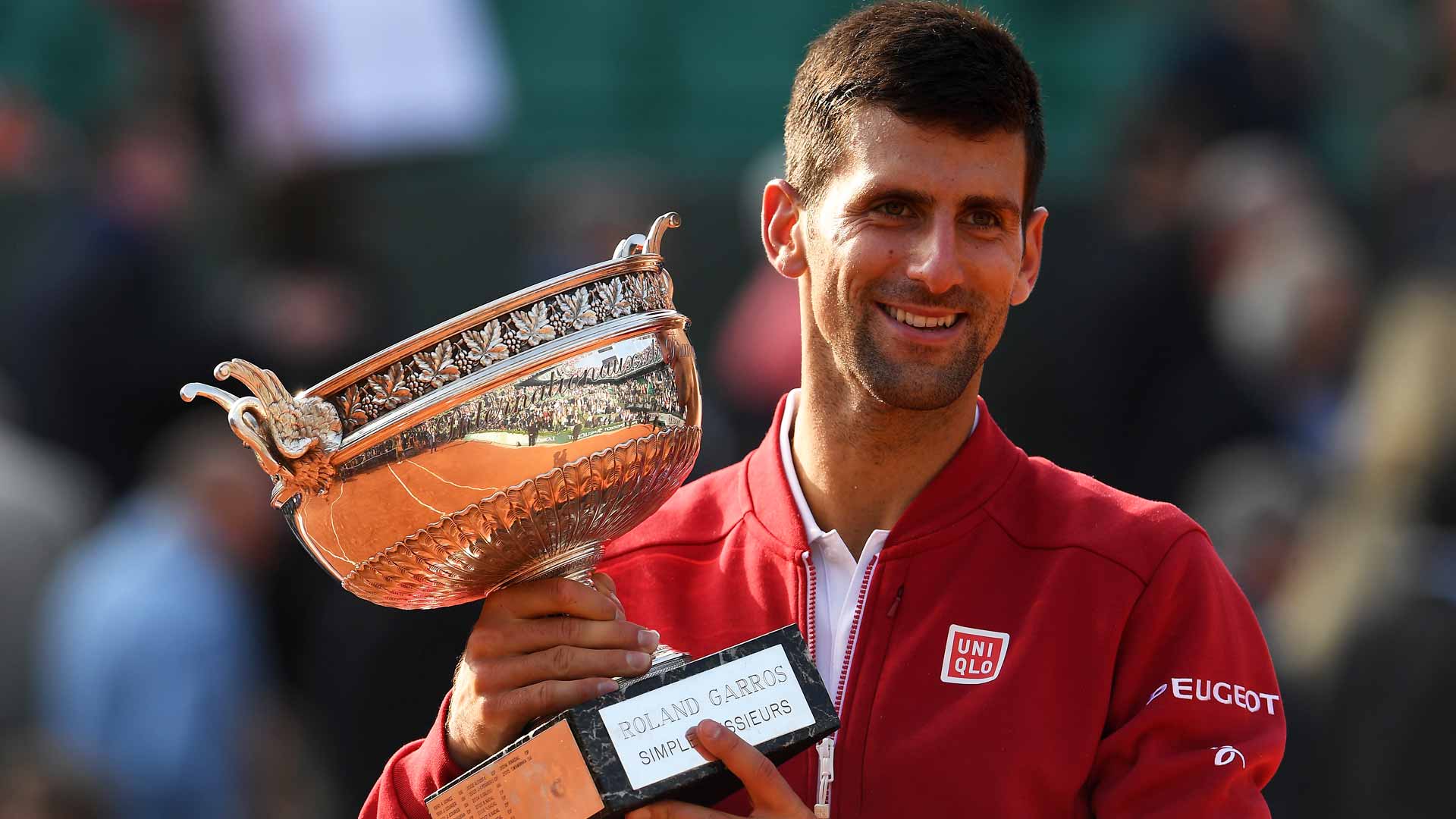 2017: Nadal’s ‘La Decima’
Having already established himself as the greatest clay-court player of all time, nine-time champion Nadal was playing for history. He looked to become the only player in the Open Era to win 10 titles at a Grand Slam, having already reached double digits that year in Monte-Carlo and Barcelona.

Nadal produced his most dominant run at this event by dropping just 35 games across seven matches. He stormed past Wawrinka in the final to achieve the historic feat known as “La Decima”, earning his first major trophy in three years and jumping to second on the all-time list for most Grand Slam titles with 15. 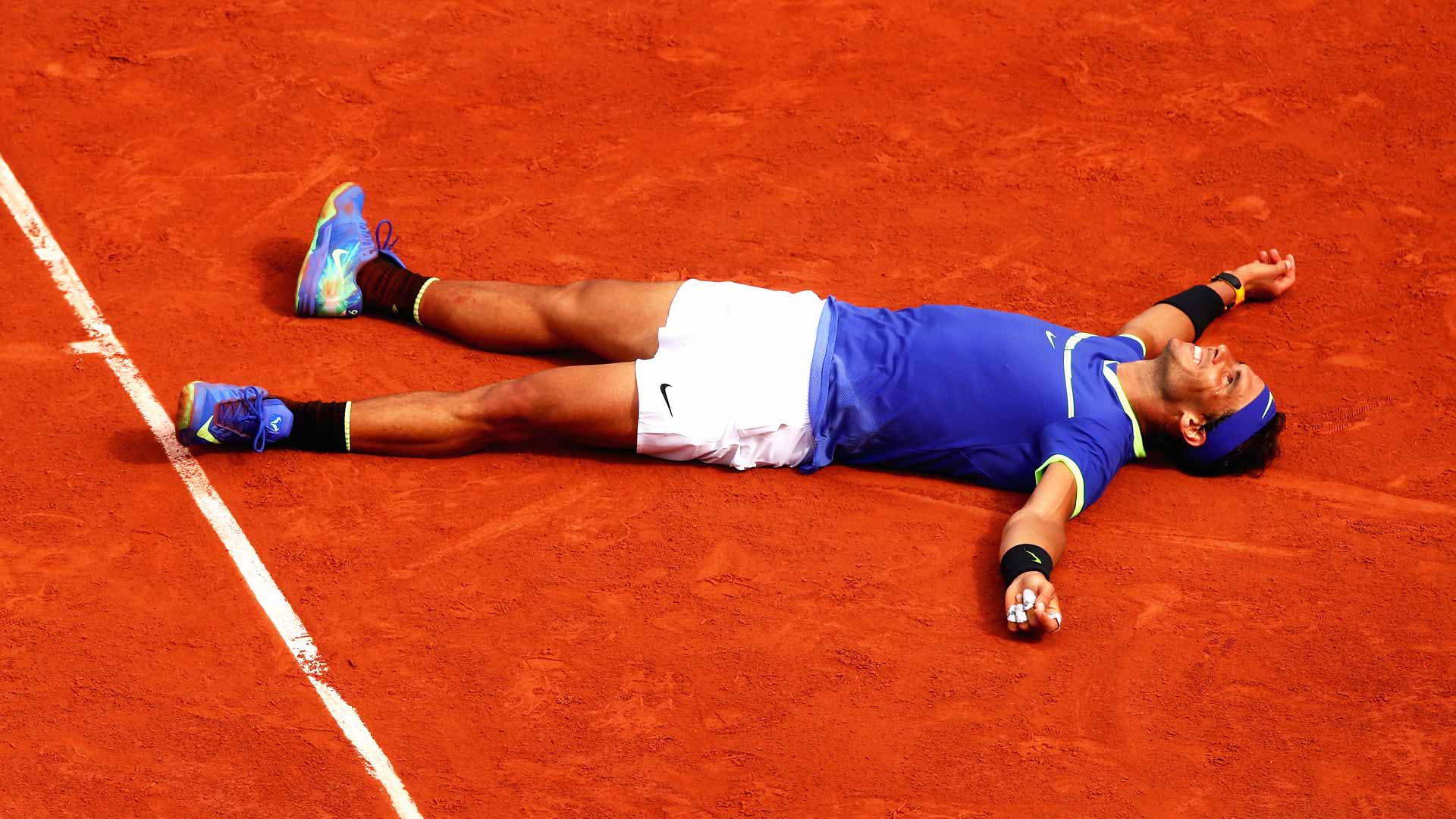 2019: Nadal Rewrites History Books Again
Critics began to wonder if Nadal’s clay-court supremacy had finally ended after the Spaniard lost in his first three events on the dirt that year, but he silenced them once again. The top seed and two-time defending champion defeated Dominic Thiem in a rematch of the 2018 final for his 12th trophy in Paris.

By winning the title, Nadal became the only player in history to win 12 singles titles at an individual Grand Slam. He followed up with his fourth US Open crown and finished the season as year-end No. 1 for the fifth time. 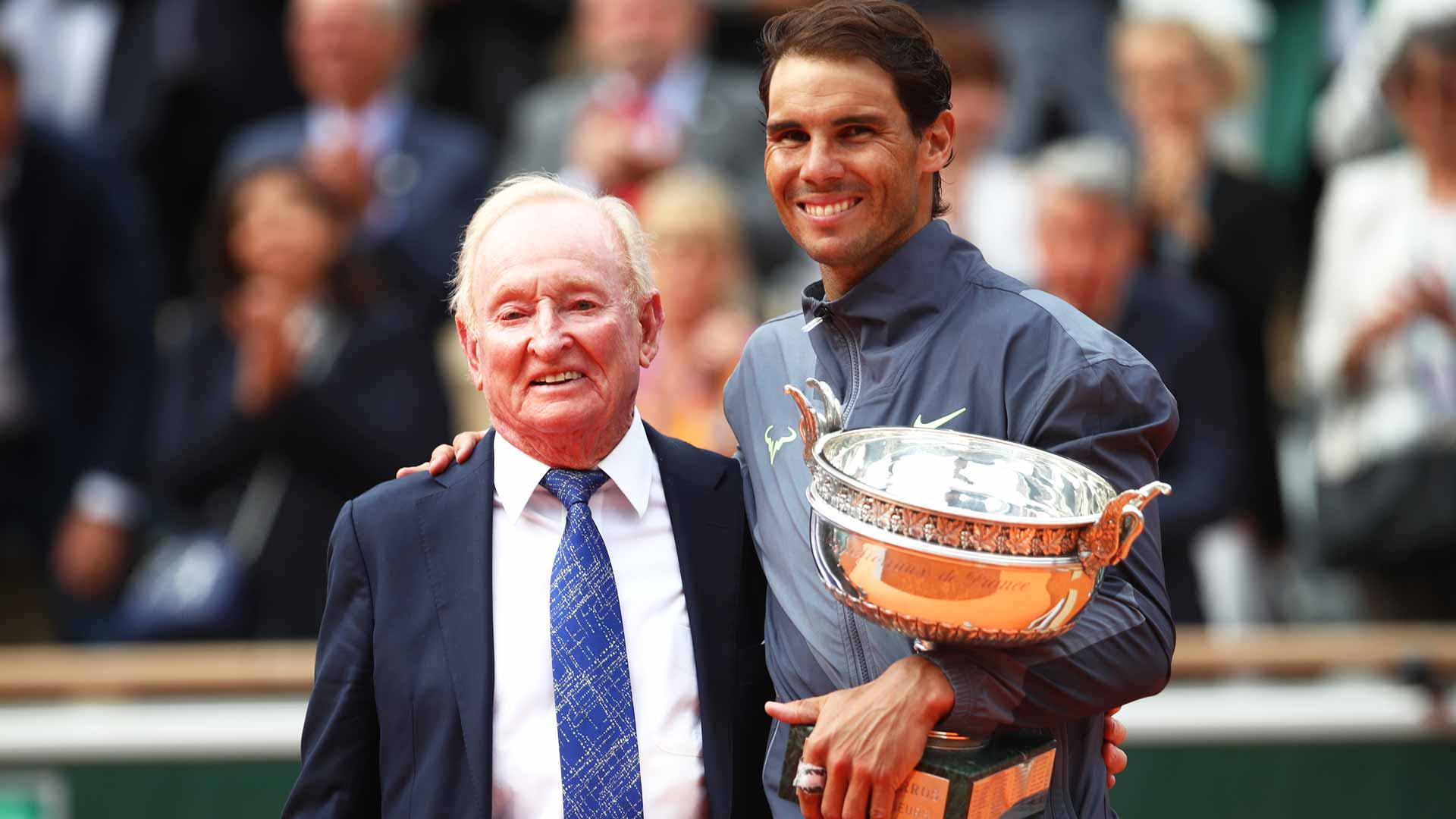