In the third installation of ATPWorldTour.com’s ‘My Point’ series, American Steve Johnson writes about the struggles he has faced — on and off the court — since his father passed away in his sleep one year ago today

My hands were on my knees as I stood bent over behind the baseline. After retaining my title in Houston last month, I was choking back tears.

I looked to the sky and pumped my fist as I walked to the net to embrace my opponent, Tennys Sandgren, a first-time finalist who I knew wanted to win his first trophy badly. When I put my head down on his chest, Tennys said something I will never forget.

“I know our Dads are watching in the crowd.” 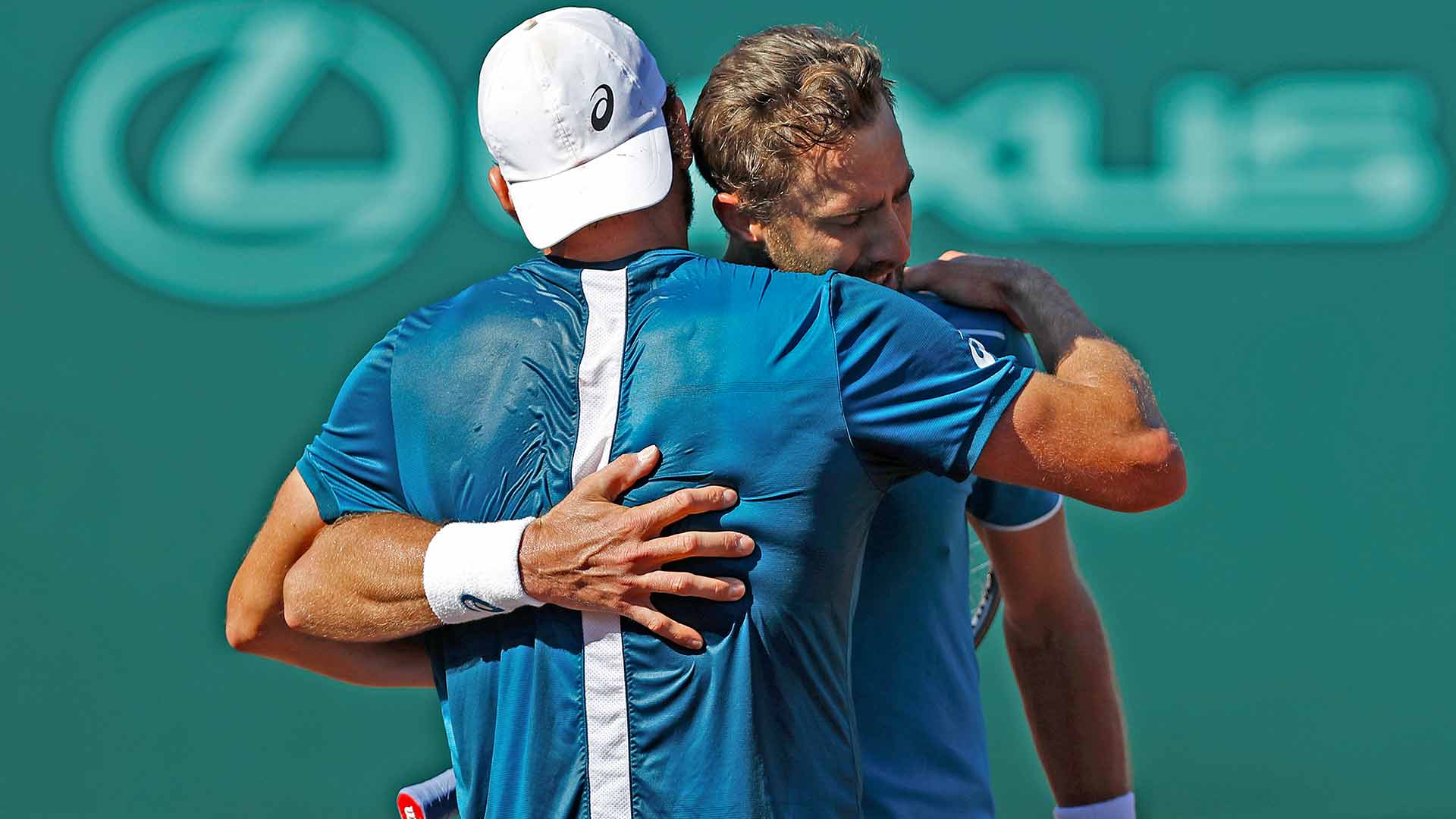 Aaron M. Sprecher/US Clay
I was doing my best to hold it together. But when Tennys, who lost his father a number of years ago, said that, I let it all out.

One year ago today, just 25 days after winning my first title on home soil in Houston, my dad, Steve Johnson Sr., passed away in his sleep.

I had just fulfilled a dream we shared — earning a trophy in the United States. But that was the last match he ever saw me play. Suddenly, Dad was gone.

I vividly remember when Mom called that Thursday.

I’d checked into my flight to Rome at Los Angeles International Airport and had just dropped off my bags. It was 6:30 in the morning when my phone rang. Mom’s an early riser, so it wasn’t completely out of the ordinary that she was calling. I figured she probably just wanted to tell me to have a safe flight.

I was barely 10 feet from the United Airlines counter, walking toward security when she gave me the most devastating news of my life. I only had a few words in me.

I hung up the phone and jumped into a cab back to my house. I called my agent since my bags were checked in, and he told me not to worry about a thing — just go be with family. My then-fiancee — Kendall Bateman, whom I married on 21 April of this year — and I then got in our car and drove to Orange, California, where my parents lived. The radio was off. We sat in silence. My eyes were wide open in shock.

When we drove around the corner of my parents’ block, I saw a police car, a medic, and some family members’ cars. I still see all those cars outside the house sometimes when I make that turn. I’ll find myself short of breath, thinking I’m going to walk in and see Dad sitting on the couch watching television. That was the worst ride home of my life.

The year since has been extremely tough. But my parents raised me to be a competitor and do things the right way. Dad wouldn’t have wanted me to give up, so I got back on the court, even though it’s been a struggle.

Dad was my first coach, after all. I remember spending long summer days with him at the courts with all the ladies’ groups he taught in the morning and all the older kids in the afternoon. I’d be the five or six-year-old kid getting beat up by 12-year-olds. I probably didn’t enjoy the losing part, but I loved being out there with Dad.

But he didn’t just help me. He coached hundreds, if not thousands, of kids, adults, high school teams, you name it. I remember when I was little, he even let a teenage girl he coached stay with us over the summer. He’d always coached her, but their family moved a bit far away. So like he always did, Dad made it work, and she not only went on to play at Nebraska, but remains a good family friend.

There’s no other way to put it: My dad loved everything about tennis and would do anything to help others achieve their goals.

That’s why I’ve found this healing process so difficult. We shared a passion for the sport.

I remember Dad taking me to watch Andre Agassi play the Netherlands in Davis Cup at Newport Beach when I was seven. We went on a trip to the US Open when I was young, too. As a young kid I was in tennis heaven running around from court to court, wanting to take it all in. Dad and a close family friend Rance Brown told me that I should want to play on those courts one day. 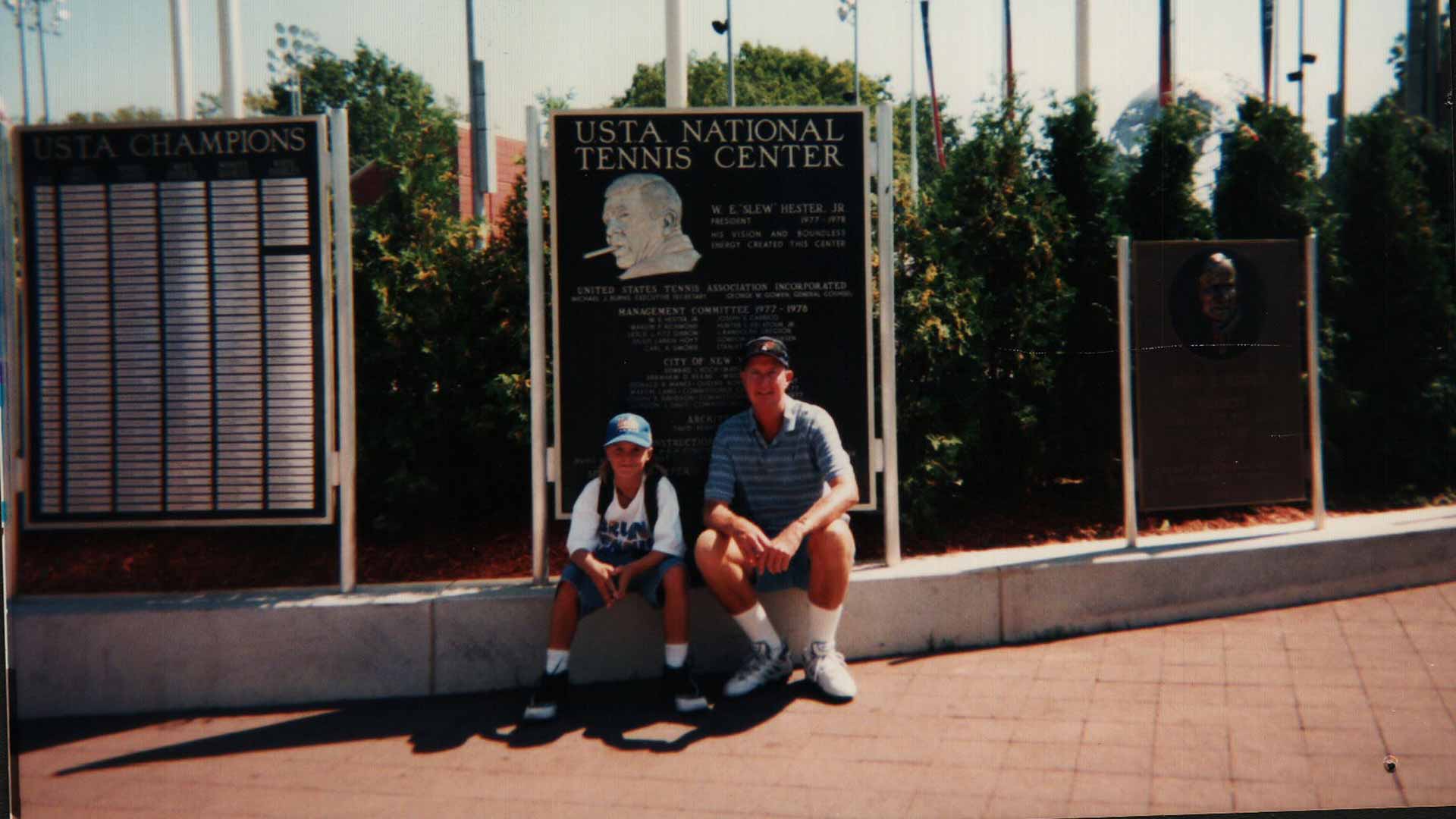 Steve Johnson
When I did become a professional, Dad was there, like always. He got to see me play on those same courts in Flushing Meadows. He was there when I played Roger Federer at Wimbledon on the historic Centre Court. He was in the stands when I won my first title at Nottingham two years ago.

So while many athletes who lose a loved one find their peaceful place on their playing field, a tennis court was the place I felt all wrong.

I can’t just go hit tennis balls like everything’s normal. It’d help if I knew the trigger, but the most ordinary of moments during a drill could make me think of Dad. There are some days I can get through it and some days I just have to take a break.

I had an especially hard time last summer because it was still so fresh. My mind was all over the place and once I got to Wimbledon, there was such a weight on my shoulders.

Physically I was on the court playing Marin Cilic in the third round, but emotionally I was just so ready to be done. I was thinking about what was truly important to me, and my tennis was such a small part of that at the time.

Right when I got home from Wimbledon, I was in and out of the hospital for a week. My body completely shut down. The doctors originally thought it might have been appendicitis, but they never figured it out. Deep down, I know my body just couldn’t handle what I’d gone through.

Even after that, it’s been hard to look at my players’ box at tournaments like the US Open and Indian Wells, because Dad should be there. I don’t look over there for coaching. I just wish my biggest fan was there. 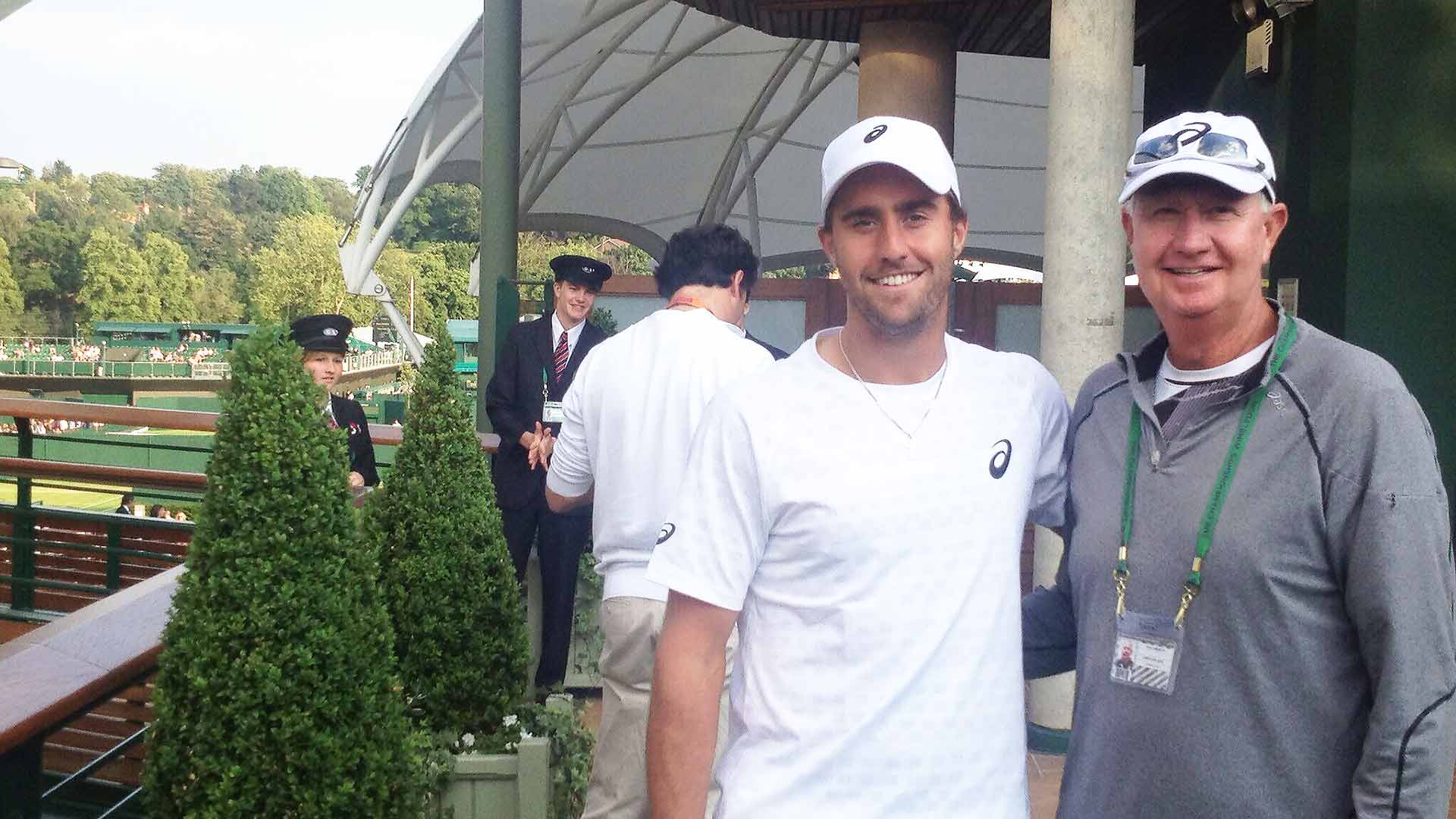 Steve Johnson
But through the toughest moments, I’ve found a sense of unity. In Houston, I know it couldn’t have been easy for Tennys to lose his first final in front of his fantastic Mom, brothers, and others close to him. But he knew how I was feeling, and I’m forever thankful that he was there for me that day.

Going back to last year at Roland Garros, I hit a forehand winner to beat Borna Coric after four hours in the second round. I was incredibly proud of my fight, but after that shot I completely broke down.

When I got to the locker room, my coach Craig Boynton, my physio Christian LoCascio, and my good friends Sam Querrey and John Isner were there with me as I sat with a towel over my head. But a lot of other guys came up to me when they didn’t have to and just put a hand on my shoulder. It showed that while they are my competitors, the tennis world is a family too.

I have struggled with this in ways that I couldn’t have imagined. I lost three of my four matches in Australia at the beginning of the year, and when I got home, I started having panic and anxiety attacks. They were frequent, too.

They didn’t feel normal, but I’ve realised they are normal. They’re not something to shy away from.

I’ve talked a lot with Mardy Fish about the anxiety side of things. He’s someone who has gone through it, too. And I’ve learned that it’s okay to talk about it. It is not easy to deal with by any means. I tried the macho man deal for months, telling people I was fine until I was by myself and I could let go. 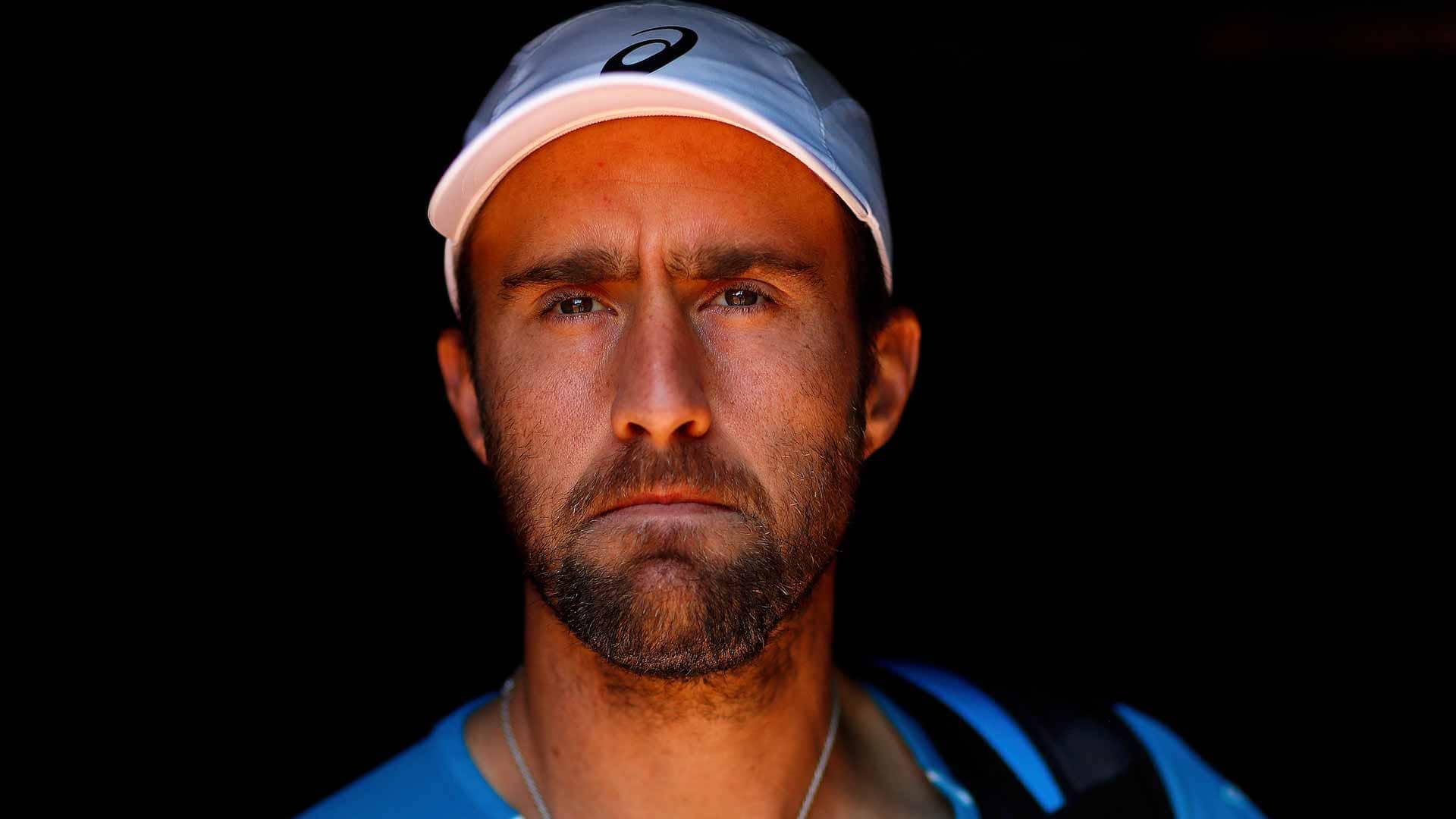 Aaron M. Sprecher/US Clay
But hopefully this will reassure people that there is nothing wrong with opening up. That’s why I started seeing a professional earlier this year (thanks to a push from Mom, too). There’s no right answer to get over losing a loved one. But you try to live life the best you can. And while I still have many tough moments, speaking to somebody about it has helped a lot. I’m working my way back towards being happy and enjoying tennis again. That’s what Dad would have wanted.

Dating back to my college days, I’ve gone to the back of the court to say a little prayer before each match and win or lose, I say another one. That has a deeper meaning now.
Dad might not have been there physically in Houston last month. But when I looked up to the sky, I knew he was watching. No matter where I’m playing or what time of day, I know Dad’s up there supporting me every step of the way like he always has.

Hopefully this will get easier, but I never want to forget what Dad has done to get me to this point.

I’m very blessed — I get to play tennis for a living, so the bad days are still great.