Maxime Cressy vividly remembers playing tennis on Sundays as a boy in France with his brothers Jonathan and Mathieu. When they were ready to leave the club, Maxime wanted to continue playing.

“I would always tell them, ‘One more ball, one more ball.’ That one more ball would turn out to be two more hours of playing tennis,” Cressy told ATPTour.com. “Over time they got sick of tennis because of me, because I was always demanding their time. With my brothers I was very competitive and wanted to be better than them. They grew tired of it!”

Jonathan and Mathieu are certainly proud of what their brother has become: one of the most dangerous players on the ATP Tour. On Tuesday, he will try to prove that against sixth seed Felix Auger-Aliassime in the first round of Wimbledon.

The American is a scary foe, especially on grass, because of his throwback serve-and-volley game. On his day, the 6’6” righty takes the racquet out of his opponents’ hands. There is little they can do about a perfectly placed serve and a crisp volley into the open court. But if you ask Cressy what he wants fans to remember him for, it is not his unique game.

“I would want people to know me for my character, that I have resiliency. When things become difficult, I never give up. I always find a way,” Cressy said. “I’m the kind of person that will do anything in his power to find a solution towards where I want to be.”

Cressy’s game speaks for itself. It’s in your face every point. The 25-year-old is going to come at you. What will you do to counter it? Although that is the product of countless hours of practice and fine-tuning, it is more so the result of Cressy’s mindset.

“[It] is more a matter of mindset than the serve and volley in itself. I think my serve and volley game would not be as efficient if my mindset was not on point,” Cressy said. “In order for serve and volley to work you have to be very consistent and very resilient in the face of the whole tennis world trying to convince you that it’s not the right way to play tennis. It demands a lot of character.”

Cressy reads notes in a journal during changeovers to stay present and maintain his focus. But it goes far beyond that. When the American was about 16, he began to learn about spirituality.

His father’s friend was a huge fan of Paramahansa Yogonanda, who in 1946 published the book Autobiography of a Yogi. Cressy decided to read it and then began to dig deeper into spirituality, reading Eckhart Tolle’s The Power of Now among other books.

“I then started to do a lot of visualisation about the goals I wanted to achieve. Before I didn’t know what I wanted, but with spirituality I started to ask myself what I wanted and then my biggest wish was to make a huge impact on the professional tour. That was my dream,” Cressy said. “I think everyone’s dream is to be No. 1, but I wanted to make that dream a reality.”

It was not always an easy path for Cressy, who spent most of his childhood in France before moving to the United States, where he played college tennis at UCLA, where at one point fellow Top 100 player Mackenzie McDonald was his roommate and Marcos Giron was a volunteer assistant coach. He barely played in his early days on the team.

“I was not the one training on the bigger courts, on Courts 1, 2 or 3. I was more on Courts 5 or 6 at the end playing in the back courts,” Cressy said. “I always had that determination to get to the top part of the lineup. Even though at the beginning I wasn’t considered a top player, I really wanted to get there. The fire within me was always there. 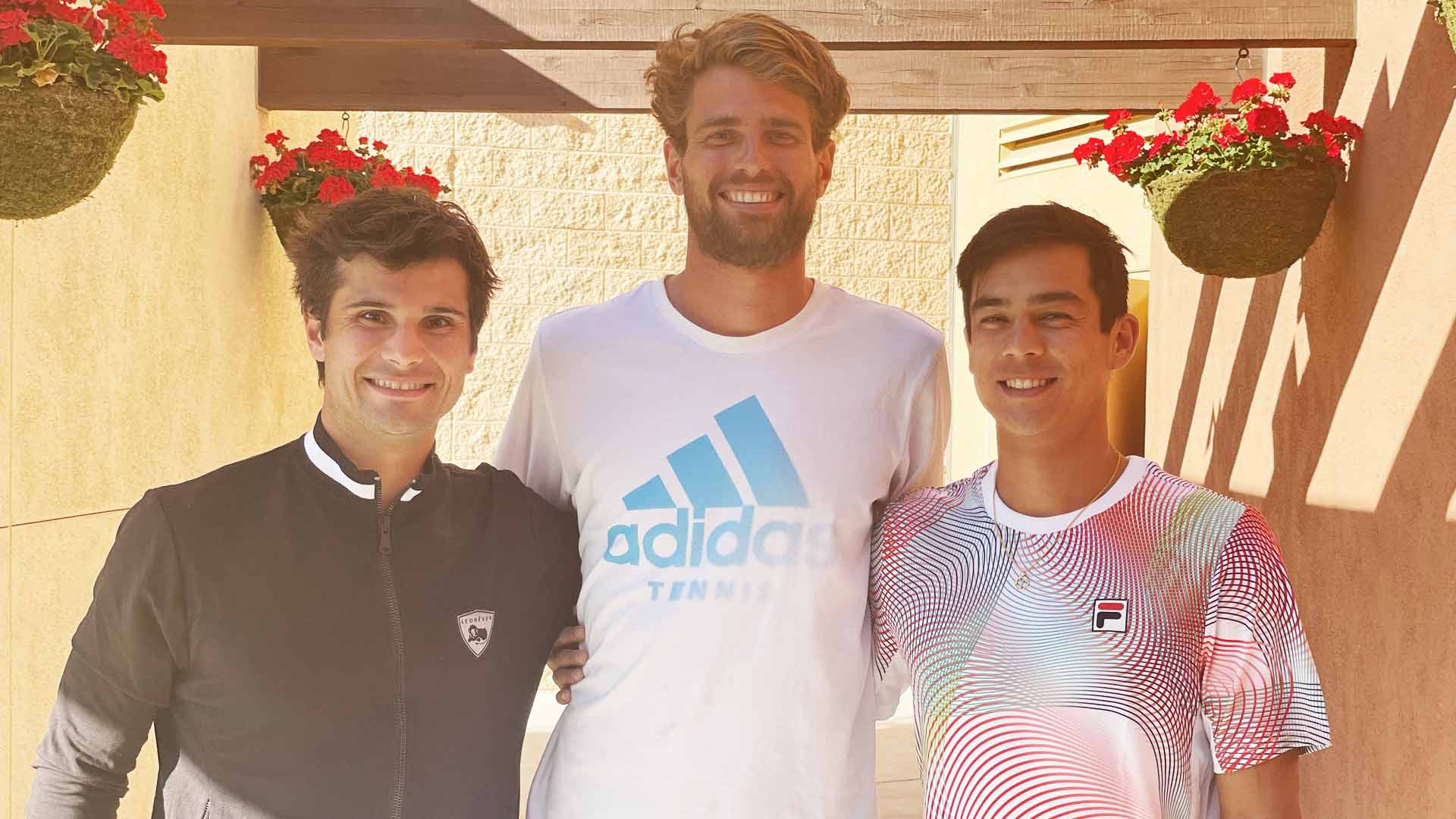 Cressy poses with Marcos Giron and Mackenzie McDonald, also former UCLA Bruins, earlier this year at Indian Wells.
“I felt like it had to work and that the way would be carved out for me. But the key for me was each time I lost a match or each time I encountered challenges, I always asked myself, ‘Alright, what do I need to do improve? What do I need to do in order to get to the next level?’”

Cressy eventually climbed to the top spot in his team’s lineup and won the NCAA Doubles Championship in 2019. But ascending the Pepperstone ATP Rankings is not easy.

This time last year, Cressy was World No. 153. Now he is at a career-high World No. 45 after reaching his second ATP Tour final last week in Eastbourne. In January at an ATP 250 in Melbourne, the American made his maiden championship match and tested Rafael Nadal in a tight two-set final. No player inside the Top 50 has soared more spots this year than Cressy.

When the Paris native turned professional, his goal was to compete in ATP Tour events as soon as possible. Now, he admitted his goals are “getting much more ambitious”. But the process remains the same.

Cressy is a big believer in routines and repetition. For example, he reads a lot. Instead of trying different genres or authors, the American reads the same book — Ask and It Is Given by Abraham Hicks — every day in order to follow one voice and not get pulled in different directions by different writers’ voices.

One passage in the book that sticks out features an analogy about trees. Cressy paraphrased it: “Our limiting beliefs are the trees on our way. The stronger our desire, the more ambitious we are, the higher the speed of our car going on the road. The limiting beliefs are trees on the road and when you encounter a lot of resistance, a lot of problems, that’s when you’re running into trees.

“Life is about figuring out how to get the trees out of the way and keep going instead of slowing down the vehicle so that the crash with the trees is not as powerful. The lesson is to find a way to get rid of the trees and the limiting beliefs that are stopping us from moving forward.”

According to Cressy, one of those limiting beliefs is that serve and volley is not going to be as efficient in today’s game. He believes it is not true. The same way as a boy he thought he would eventually defeat his brothers and later that he would climb his college team’s lineup, Cressy will do everything in his power to prove it, no matter how many hurdles he faces.