Russian relives winning the singles and doubles titles in Paris

Yevgeny Kafelnikov made history at 1996 Roland Garros, becoming the first Russian man to win a Grand Slam title. But the former World No. 1 put his name in the history books at that event for another reason — that’s the last time any man has won both the singles and doubles title at the same major.

“I’ve got news for you: Nobody will [do it again] for a very long time,” Kafelnikov, who won that doubles crown with Daniel Vacek, told ATPTour.com. “If you ask me when the next time we’re going to see a champion in singles and doubles at the same Slam, I don’t see that happening for many, many years to come.”

The closest any man has come since was at the 2000 US Open, when Lleyton Hewitt won the doubles title with Max Mirnyi and reached the singles semi-finals. 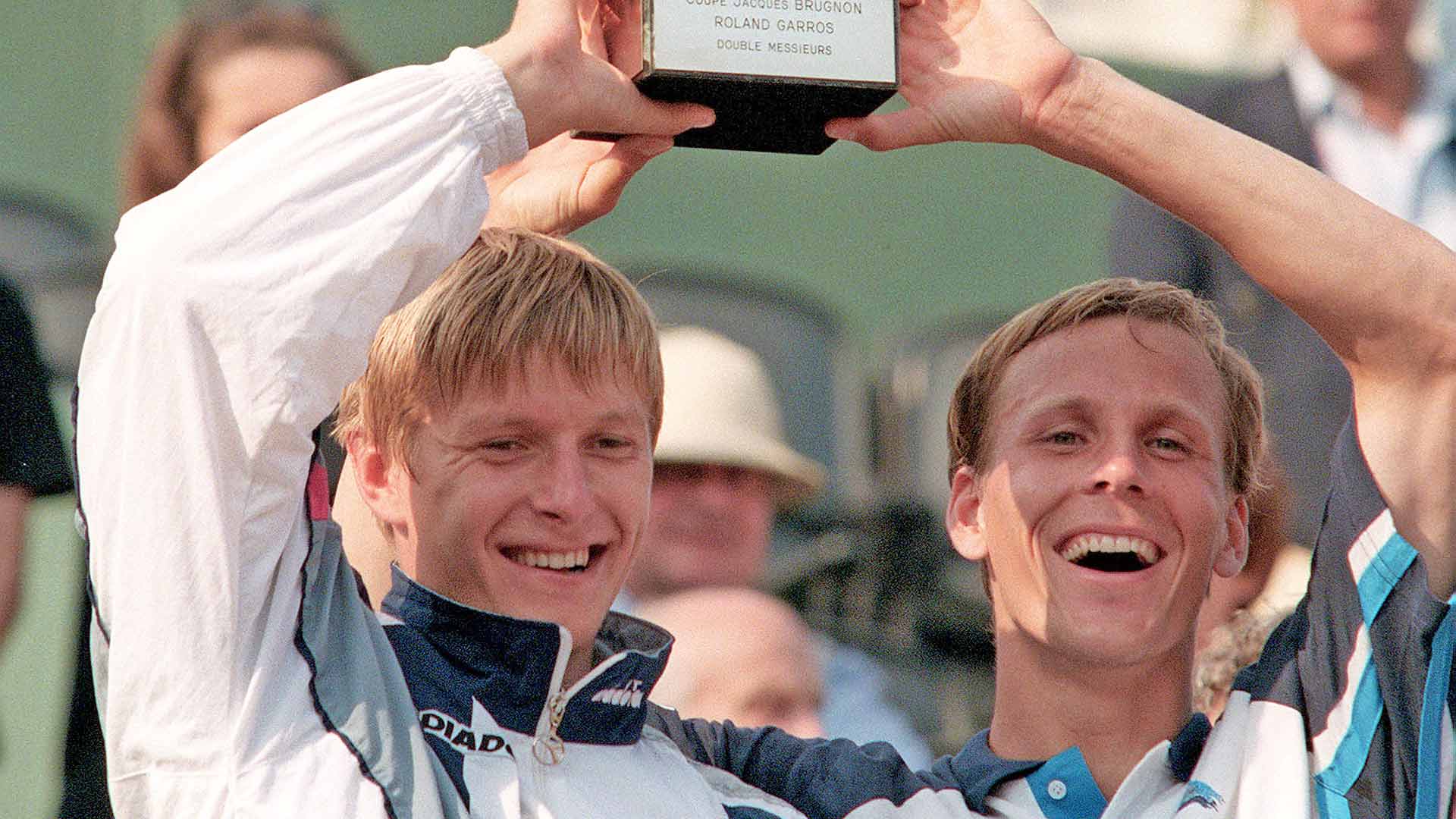 Yevgeny Kafelnikov and Daniel Vacek celebrate their 1996 Roland Garros doubles title. Photo Credit: AFP/Getty Images
Not only did Kafelnikov win both titles at 1996 Roland Garros, he dominated both draws. The 22-year-old played 35 sets at the event, and only lost one. How did he balance it?

“Easily,” Kafelnikov said. “I used my doubles matches basically as my preparation for the singles. You are practising elements in your doubles game that are really necessary for your singles: the return of serve, for example, volleys, serve. Instead of going to practise for one hour and 30 minutes, I used doubles for that. All the circumstances came together perfectly.”

Kafelnikov is a keen student of the sport, and he wasn’t thrilled when he saw his draw in Paris. Three of his first four matches came against Spaniards, and the other one was against Thomas Johansson, who proved a nemesis for the Russian throughout his career. But Kafelnikov beat Galo Blanco, Johannson, Felix Mantilla and Francisco Clavet without losing a set.

“It just shows how good my game was. If I wasn’t sharp I would easily lose to the players like Felix Mantilla or Francisco Clavet, who were really solid clay-court players,” Kafelnikov said. “But I was playing so well that none of those guys had a chance to get a sniff of beating me.”

Kafelnikov knew he’d have a tough test in the quarter-finals against Richard Krajicek, whom he beat in three tough sets the week before Roland Garros at the World Team Cup. But the Russian knew that the Dutchman was not as comfortable on clay as he was indoors or on grass, which played to his advantage in a four-set victory.

It wasn’t surprising that Kafelnikov was winning, but perhaps it was surprising that he went for four eight-kilometre runs around Court Philippe Chatrier during the tournament. Those runs came after his singles matches in the first round, third round, fourth round and quarter-finals.

“A lot of the [players] saw me. They were surprised. Two hours after the matches I went for a run. Many thought, ‘Okay he played one hour, 40 minutes against Clavet, he didn’t waste too much energy, why not go for another workout?’ They were looking at me and some of them were doing the same.”

Kafelnikov faced World No. 1 Pete Sampras in the semi-finals. The American legend rallied from two sets down against two-time champion Jim Courier in the last eight, and he also won five-setters in the second and third rounds.

But Kafelnikov was supremely confident. At the same event he defeated Krajicek in Dusseldorf, the Russian raced past Sampras 6-2, 6-2. In Paris, after a tense first set, he beat the top seed 7-6(4), 6-0, 6-2. Those were the only two wins he’d earn against Sampras in 13 tries.

“I just don’t want people to feel Pete wasted his energy on his way to the semi-finals and he had nothing left [and that] if he would have been fresher, I had no chance. I don’t see it that way; I’m not going to believe in that,” Kafelnikov said. “We all can sit here and discuss, imagine what would have happened, but I believe I was the better player, particularly in that tournament.”

At the same time, Kafelnikov and Vacek had moved their way through the doubles draw. The final against Guy Forget and Jakob Hlasek provided a good opportunity for Kafelnikov to get used to what it felt like to play for a major title. Kafelnikov/Vacek breezed to a 6-2, 6-3 triumph.

“My attitude with the doubles was, ‘You have the most important match in your life tomorrow, so just try to emulate what you’re going to feel like tomorrow, today.’ That’s exactly what happened,” Kafelnikov recalled. “I was really nervous because we were playing the final of a Grand Slam and tomorrow was going to be an even more packed stadium than we had that day. Don’t freak out when you see a full stadium tomorrow… All the elements came together in that tournament to do both, singles and doubles, so perfectly.

“My partner was over the moon. He even stayed the next day in town to help me to warm up [for the singles final].”

Kafelnikov only had one match left to make history. He faced German Michael Stich, who had upset defending champion Thomas Muster in the fourth round. The Russian had won six of their nine previous meetings, and he tried to treat it like a normal match, even if it wasn’t. Kafelnikov believed Stich could hurt him from the baseline more than Sampras did, so he was attentive to that, and his return game helped him to a two-set lead.

“I lost my first match point at 5-4 in the third set. It was [my] advantage on Stich’s serve, and he held his serve, got it to 5-5. Believe it or not I started cramping in my left leg out of nowhere because my nervous system got on edge… I can’t even remember the last time I had cramps [before that],” Kafelnikov said. “I told myself, ‘If you don’t get through this set you might not win it.’

Kafelnikov went on long runs during the tournament, and yet he cramped during the biggest moment of his career. Kafelnikov held off Stich in the tie-break, hitting a forehand passing shot the German couldn’t handle. The Russian was so relieved, he threw his racquet high into the stands.

“I was really, really so confident, you cannot believe. You probably only get such feelings once or twice in your career where you feel like nobody can beat you. I can imagine what Djokovic and Nadal are feeling like right now because they’re mostly 365 days a year feeling that way. For me, against such competition like what I had to deal with in my career, that was a wonderful feeling.” 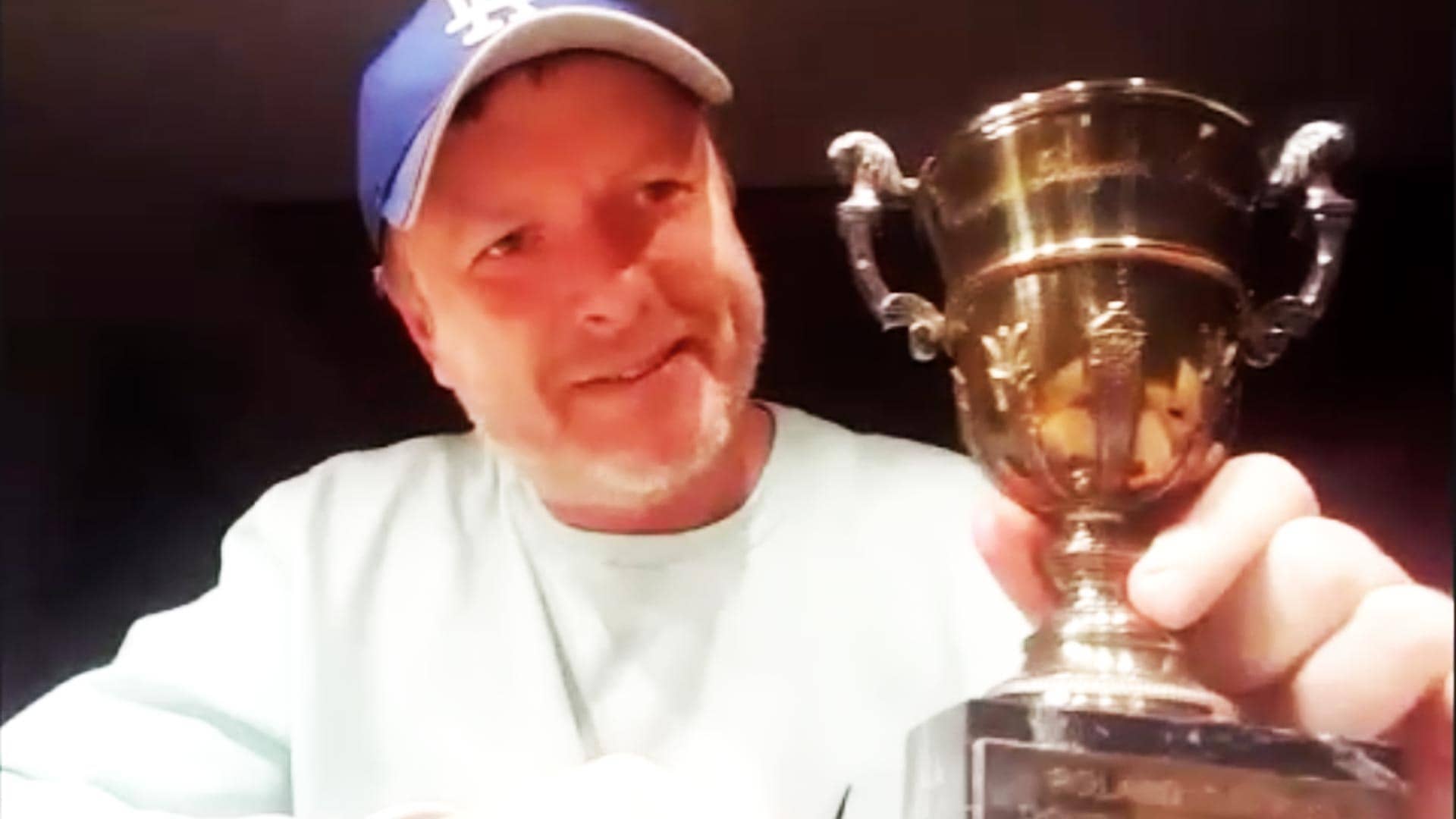 Kafelnikov beamed as he showed ATPTour.com his singles trophy from the tournament, which he still has displayed in his home. Now 46, he thinks it’s “pretty cool” that he is still the last player to win the singles and doubles titles at the same Grand Slam.

“I will definitely in my lifetime be the last one,” Kafelnikov said. “What I really want, if for some reason in my lifetime someone wins both in singles and doubles at the French Open, I would love to present the trophy to that person. But again, I don’t know if it will happen ever in my lifetime.”