Ivan Lendl: The Monk In The Iron Mask

Ivan Lendl: The Monk In The Iron Mask


With a steely resolve and singular focus, the Czech/American took fitness and professionalism to a new level

In the sixth profile of a series on the 26 players to rise to No. 1 in the FedEx ATP Rankings, ATPTour.com looks back on the career of Ivan Lendl. View Full List

As World No. 1
Ivan Lendl first became No. 1 in the FedEx ATP Rankings on 28 February 1983, the year he won seven titles, for a total of 11 weeks until 15 May that year. At a time when the Czech turned-American jockeyed Jimmy Connors and, predominantly, John McEnroe for the top spot, Lendl was No. 1 on eight occasions, including for 157 straight weeks between 9 September 1985 and 11 September 1988. It was three weeks shy of Connors’ 160-week unbroken streak during the mid 1970s. Lendl once said, “I was between two and three in the world for two, three years. That’s not exactly where I wanted to be.” He finished the 1985-87 and 1989 seasons as the year-end No. 1 and was the world’s best player for 270 weeks in total.

Grand Slam Highlights
Lendl made his Grand Slam championship debut at 1978 Roland Garros, but picked up the tag of ‘nearly man’ after four runner-up finishes (1981 Roland Garros, 1982 US Open, 1983 Australian Open and US Open) before his major breakthrough. On Parisian clay, Lendl trailed McEnroe by two-sets-to-love and 2-4 in the 1984 Roland Garros final, only to win 3-6, 2-6, 6-4, 7-5, 7-5. He lost to McEnroe in the US Open final a few months later but new-found confidence heralded the start of a dominant period, which included two further clay titles at Roland Garros in 1986 and 1987. Lendl contested eight straight US Open finals, equalling the record of Bill Tilden (1918-1925), winning in three successive years (1985-87) and famously hired the same workers to lay the exact US Open surface at his Connecticut house. Lendl won back-to-back Australian Opens in 1989 and 1990 and twice finished runner-up at Wimbledon in 1986 and 1987. Later in his career, while still near the top of the rankings, Lendl stepped up his bid to win what proved to be an elusive title at the All England Club. He skipped 1990 Roland Garros to win grass titles at Beckenham and then at The Queen’s Club, but could not replicate his form at Wimbledon, where he reached the semi-finals for the seventh time in eight years. His determination to win at SW19 was in stark contrast to his earlier outlook. He once said, “I am not playing Wimbledon because I am allergic to grass.” Overall, he won eight major crowns in 19 Grand Slam finals and reached a semi-final or better on 47 occasions.

Nitto ATP Finals Highlights
Lendl reached nine consecutive finals at the Masters [now named Nitto ATP Finals], from 1980 to 1988, when the season finale was held in New York. He won on five occasions in 1981 (d. Gerulaitis), 1982 (d. McEnroe), 1985 and 1986 (d. Becker), and 1987 (d. Wilander), while his fifth-set tie-break loss to Boris Becker in the 1988 final remains one of the sport’s greatest matches. In 12 straight appearances through to 1991, Lendl never once failed to advance to the semi-finals, and he finished with a 39-10 match record.

Biggest Rivalries
Lendl, seven years younger, met Connors on 35 occasions (Lendl 22-13), including victories in their first eight matches. In the 1982 US Open final, one of seven meetings at Grand Slam championships, there were the first signs of niggle as Connors dared Lendl to drive a ball past him. Lendl also played McEnroe 36 times between 1980 and 1992, leading the American 7-2 in their major championship clashes. McEnroe once said, disparagingly, “Nobody gives a damn about Lendl and that’s the bottom line. I could have no personality and be more popular than him”. Pat Cash once said, “McEnroe didn’t like Lendl at all, not one bit. They were both fiery and wanted to be the best they could be, and to win. I thought it made tennis entertaining.” Their rivalry was evenly split at 15-15, until Lendl won the last six matches between 1989 and 1992. 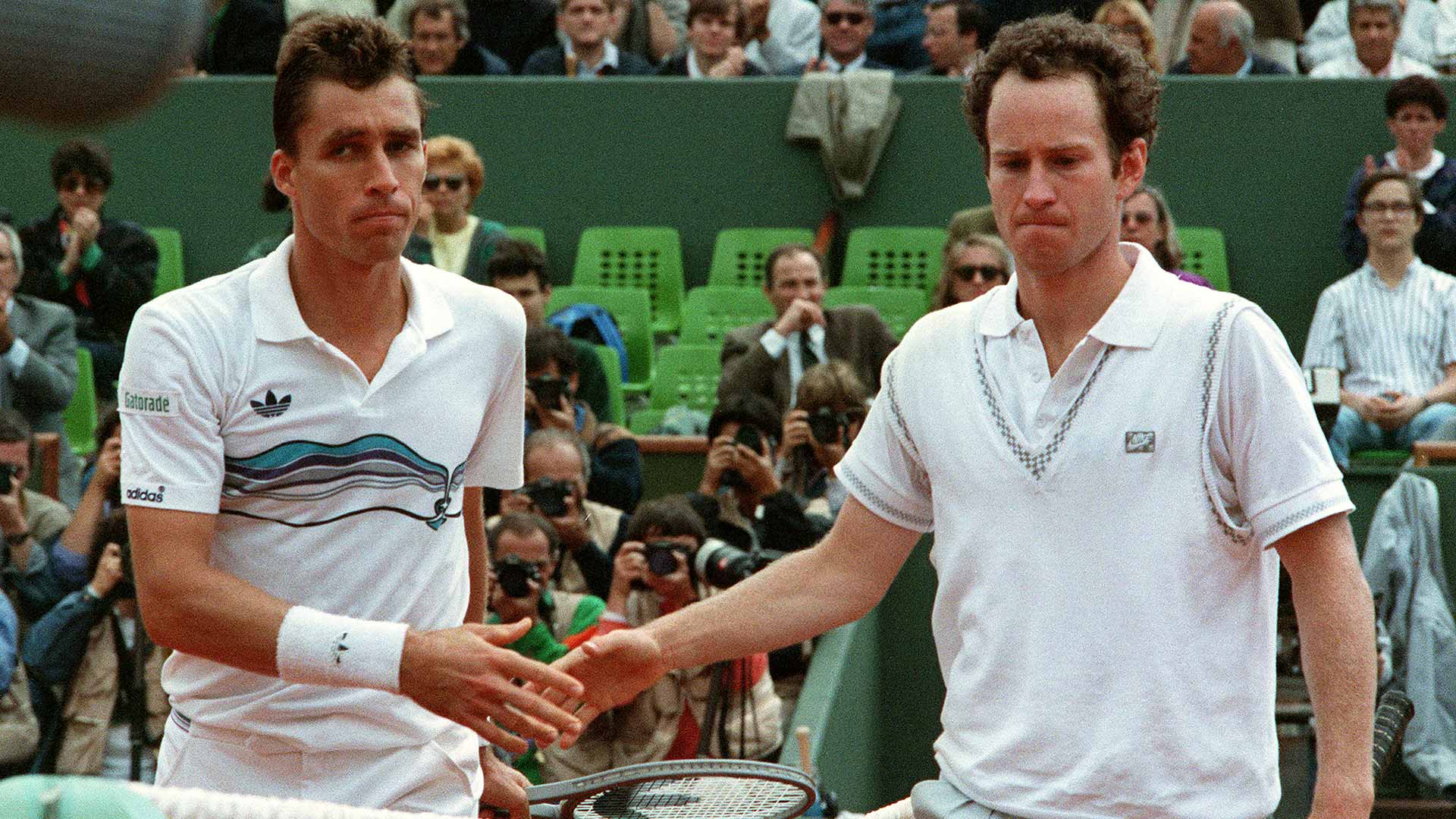 Legacy
Built around a solid forehand, hit with heavy topspin, the steely, fiercely competitive and no-nonsense Czech developed an aggressive style of power tennis seen in today’s modern game. Lendl was one of the fittest players on Tour, who prepared meticulously and looked for an edge. “My serve and my forehand I pretty much always had, but my backhand was a ‘made’ backhand,” said Lendl. “I worked on it for years.” He was one of the first players to customise the weight, balance and string tension in his racquets. As one of the world’s top indoor and hard-court players, his records of consecutive finals at both the Masters [now named the Nitto ATP Finals] and the US Open may never be broken. In playing retirement since 1994, he developed his golf game and in 2011 heightened his credentials by coaching Andy Murray to three Grand Slam titles, the 2012 and 2016 Olympic gold medals, the 2016 Nitto ATP Finals and No. 1 in the FedEx ATP Rankings. Murray’s triumph at 2013 Wimbledon ended a 77-year wait for a British Gentleman’s Singles champion at SW19. Lendl also briefly coached Alexander Zverev.

Memorable Moment
Arguably, the definitive moment of Lendl’s career, making him a major force throughout the 1980s, was his second Roland Garros final appearance on 10 June 1984. It also happened to be McEnroe’s worst moment on a tennis court. “It’s still tough for me now to do the commentary at the French,” said McEnroe in 2002. “I’ll often have one or two days when I literally feel sick to my stomach, just at being there.” Sensing it was his one opportunity to win on Parisian clay, McEnroe led Lendl 6-3, 6-2, 1-1, but became increasingly agitated by the noise from a courtside cameraman’s headphones. In a seesaw third set, McEnroe walked over to the cameraman and shouted something into his headset and later regrouped to lead 4-2. However, Lendl had rediscovered his game, starting to strike his backhand with significant topspin and lobbing when McEnroe attacked the net. McEnroe distanced himself from the net, allowing Lendl to strike crosscourt winners and he recovered to win 3-6, 2-6, 6-4, 7-5, 7-5 in four hours and eight minutes. The monkey was off Lendl’s back, after four runner-up finishes at major championships.

McEnroe on Lendl
“I realise I have to toughen up more in terms of physical conditioning, but I’m not going to live like a monk like Lendl. He’s an extremist. He’s sacrificed himself totally and in his case he got results. But I don’t think that has to be the general rule.”

Lendl on Lendl
“I only play well when I’m prepared. If I don’t practise the way I should, then I won’t play the way that I know I can… People may say I developed an iron will, but what really happened is that I made myself much fitter. I think an iron will is always supported by fitness.”

Journalist/Broadcaster Graeme Agars On Lendl
There was a simple reason that Ivan Lendl won an amazing 1068 of his 1310 matches. Every time he went on court, he gave 100 per cent effort. If you beat Lendl, it was a significant achievement. Lendl was known for his work ethic, his uber competitiveness and his hard-hitting game.
One of his early Adidas composite rackets has found a home in the ATP office in Ponte Vedra Beach in Florida. Picking it up is more a weightlifting exercise than anything else; the head is lined with more lead than a boat anchor. The implement was more a club than a racquet and not many players could have used it as effectively as did the super strong Czech-born eight-time major champion. Not surprisingly, it allowed Lendl to be one of the pioneers of the power game in men’s tennis, which ultimately transformed the way the game was played, much to the frustration of touch players like John McEnroe.

Lendl was particularly comfortable on a hard court, especially at the the US Open’s Louis Armstrong stadium in New York. Lendl won there three times, but just as impressively made the final eight times in a row from 1982. He was no slouch on clay either, but the one win that eluded him despite mammoth efforts was a win on the hallowed grass courts at Wimbledon. He made two finals, but Boris Becker and Pat Cash denied him a Career Grand Slam. One other Lendl characteristic – he always played with a pocket full of sawdust to keep his racquet handle dry. That was in the days before players rushed to towel off between points.