Players quick to step in when help is needed

John Isner was one point from winning the first set of his second-round match at the Western & Southern Open on Wednesday against eighth seed Hubert Hurkacz when he heard murmurs in the crowd. Naturally, the American turned around.

At 6/3 in the tie-break, Isner did not expect to see a ball boy fainting on the other side of the court. Immediately, the 37-year-old ran to help as best he could. Hurkacz and a woman who identified herself as a doctor also pitched in.

“I don’t think I did anything special,” Isner told ATPTour.com. “I saw Hubi running to the side of the court and it’s a scary thing because he had this ‘he-saw-a-ghost look’ in his face and he collapsed, and luckily someone was there. But I think people need to realise how hard it is what these ball boys and ball girls do. It’s a tough job out there in the heat. We appreciate their effort so much out there.

“From what I hear, the kid is going to be okay and hopefully he’s getting some fluids and in the air conditioning right now resting up. Someone told me that he remembers watching me since he was four years old or something like that, so that’s very cool to hear. But it was definitely a very scary situation and [I am] just glad that he seems to be okay.”

Isner went on to battle past Hurkacz 7-6(5), 6-7(5), 6-2 in two hours and 32 minutes to reach the third round in Cincinnati. The incident occurred at a pivotal point of the match, but that did not matter to the 16-time ATP Tour titlist.

“It doesn’t really matter what point it’s at,” Isner said. “Tennis is microscopic compared to a scary situation like that, so just glad to see he’s doing okay.”

That was not the only heat-related incident on Wednesday at the Lindner Family Tennis Center. When Felix Auger-Aliassime led Alex de Minaur 2-0, 40/40, play was halted when a fan fell ill.

The players retreated to their chairs at the time. Upon realising what had happened, Auger-Aliassime quickly passed an ice towel through the crowd to the fan and then found a bag of ice as well. 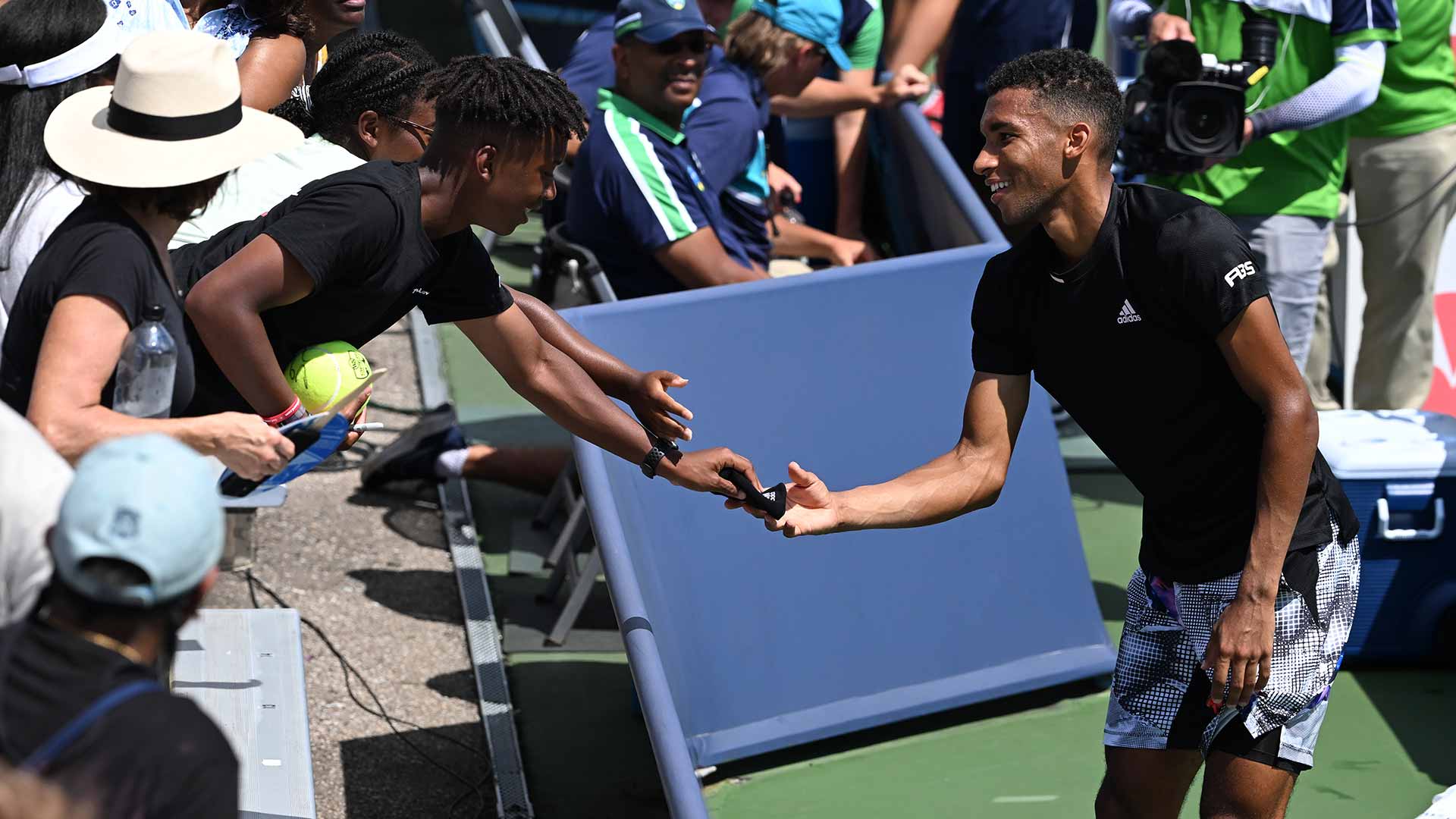 Felix Auger-Aliassime is a fan favourite in Cincinnati.

“She didn’t look well at all. It was worrying. She didn’t look good and I think that’s the first thing: the health of the crowd, the players, everybody involved. You kind of forget about the match when it comes to that point,” Auger-Aliassime said. “You just hope it was nothing too bad, I was a bit scared for her. But luckily everything went fine.

“I think it’s a normal thing as players. We’re there and if we can help just by giving ice for an ice towel, that’s the minimum we can do. But people also came to help pretty quickly and it’s nice to see people acting like this together.”

As focussed as professional tennis players are, they are aware of their surroundings and do not think twice about doing the right thing under such circumstances.

“At the end I’m a human first. I’m a tennis player after,” Auger-Aliassime said. “I come here, there are people who come and see us play and it’s a pleasure to play in front of them. It’s great to get good words from people, to sometimes share a few words if I have time. It’s good energy. I like to get that support and give whatever I can to the people who come and watch.”