Felix Auger-Aliassime arrived in Madrid searching for clay-court form. On Thursday, the Canadian showed he has found it.

The eighth seed defeated 10th seed Jannik Sinner 6-1, 6-2 in just 80 minutes to reach the quarter-finals of the Mutua Madrid Open. It was the first ATP Head2Head clash between the two ascending stars. The win lifted the Canadian to No. 9 in the Pepperstone ATP Live Rankings.

“Me playing really well and him missing a few more balls than he should on top of that, I think it just created a big difference,” Auger-Aliassime said.

Auger-Aliassime has lost just six games against two tough opponents in Sinner and clay-court stalwart Cristian Garin (6-3, 6-0). He will next play second seed Alexander Zverev for a place in his first clay-court ATP Masters 1000 semi-final.

Sinner, one of the most powerful ball-strikers on Tour, controls play against nearly all his opponents. But Auger-Aliassime dominated on serve, winning 90 per cent of his first-serve points and going through all eight of his service games without facing a break point.

According to Tennis Data Innovations, Auger-Aliassime converted 83 per cent of the points in which he was in an offensive position. And when Sinner did find himself on offence, the Canadian showed good defensive skills and “stole” 52 per cent of those points. The ATP Tour average for conversion rate on clay is 65 per cent. 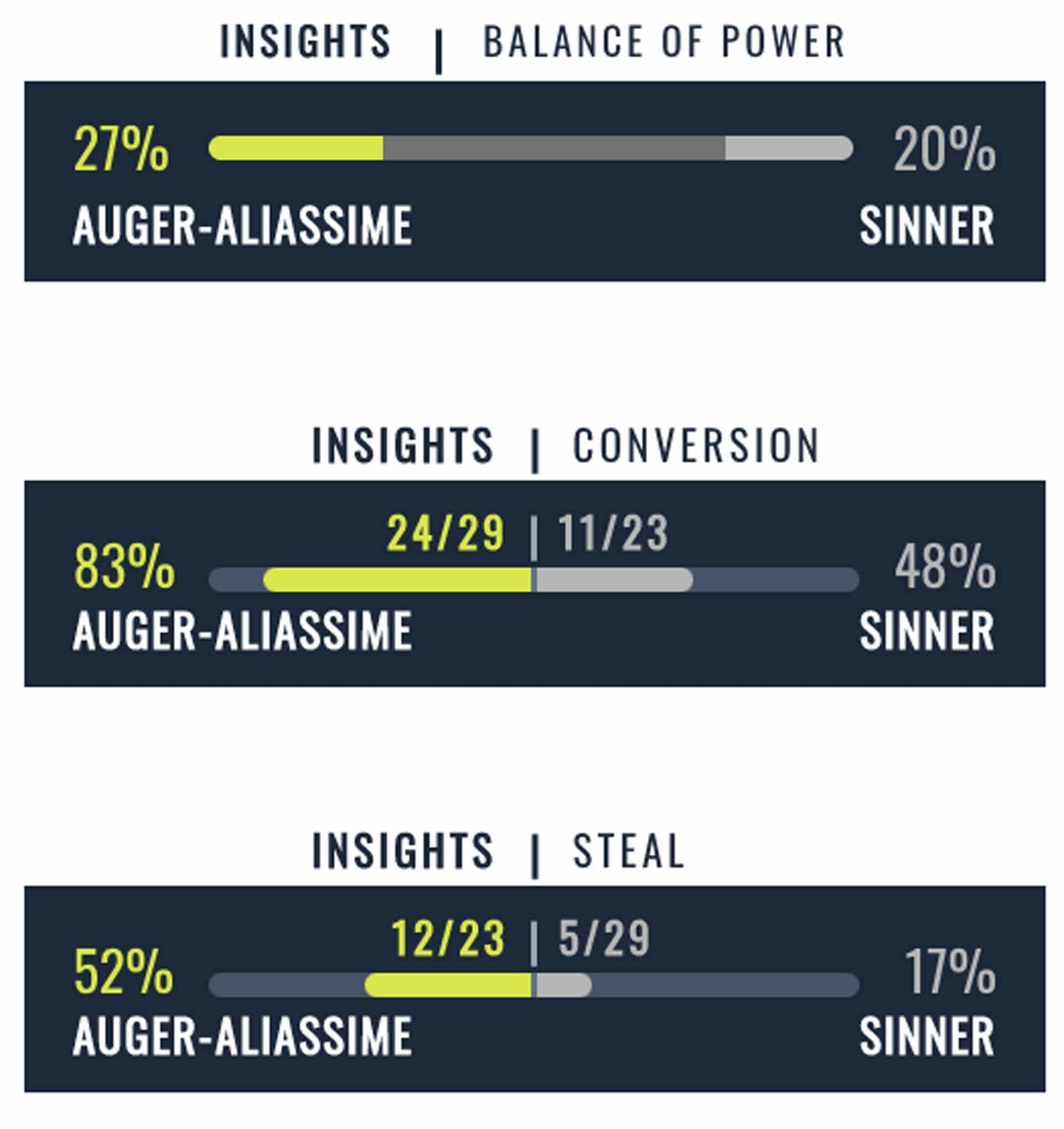 The 21-year-old’s next opponent, Zverev, is into a fifth consecutive quarter-final at the Caja Magica after Lorenzo Musetti was forced to retire from the pair’s third-round clash at the ATP Masters 1000 event on Thursday.

Defending champion Zverev led 6-3, 1-0 in what had been a high-quality first ATP Head2Head meeting between the two when a thigh injury to 20-year-old Musetti intervened in Arantxa Sanchez Stadium.

The World No. 3 led the #NextGenATP Italian after converting the only two break points of the first set in the seventh and ninth games. Zverev now holds a 17-2 record in Madrid, where the fast conditions suit his big-serving and high-powered game. Although the German had to dig deep in his three-set win over former World No. 3 Marin Cilic in the second round, second-seeded Zverev looked in impressive touch against Musetti and will eye another deep run in the Spanish capital as he hunts a sixth Masters 1000 crown.