During the COVID-19 global pandemic, the American spoke exclusively to ATP Tennis Radio from his home about life with Fritz and what lessons he has learned about coaching over the past 25 years.

How is Taylor coping during the Tour suspension?
He is keeping well; we talk every day. He has started a pretty comprehensive strength and conditioning programme, and this is a really good time for it. We’ve got a big block of time, so he can do a bunch of stuff he hasn’t been able to do. His strength and conditioning coach Brent Salazar and his physio, Wolfgang Oswald, work pretty good hand-in-hand setting up programmes like this. They have been spending a lot of time figuring it out. It stays fluid, a moving target.

Taylor is 22 years of age, he has a lot of energy. He realises this is an incredibly serious moment in history, not just tennis, and he needs to get something positive out of it with his strength and conditioning. When it gets safer to get back on the court as a team, we’ll do that and we’ll rebuild. He is working hard. I just worry he’ll become so good at all of his e-gaming that he’ll become a professional e-gamer and his tennis will go out of the window.

Was the strength and conditioning work something you were going to do anywhere, or is it something you identified he needed to work on?
He is a 22-year-old kid and he has a long, languid body. We don’t get a tonne of time. The calendar doesn’t give us a tonne of time to do this. In a strange way, now is the time for him to hit the gym, the assault bike and get on the weights. Brent can go do all of this via chat. You put on your iPad and you can watch all of the exercises and he can do it. It’s terrific. That is one way to have granules of optimism with the situation we’re in.

It seemed Taylor was really making a move now. What area do you think you’ve most improved since you started working together?
Taylor is one of the most strong-willed people I’ve ever met. That can be good and bad. That can be challenging when I’m trying to convince him of something that he doesn’t believe in. That’s a challenge for me. But when it’s good is in [facing] adversity, when he is on court and things don’t look great and he isn’t winning, or he is a little injured. He is one of the best unconditional competitors out there. He can wear his emotions on his sleeve, but I don’t mind that, because he doesn’t ever stop. I’ve seen him win matches when he is sick, when he is hurt, when he is not playing well and those are the ingredients that he is going to [need to] reach his potential. Whatever your potential is.

So when I see Taylor do that, I’m really proud. Getting to the final of an ATP 500-level event in Acapulco was a really good boost for him, but I don’t look at it through a microscope and I understand there is a lot of stuff that can and can’t happen. He will go through lots of ups and downs. I go for the macro-picture, which is this is a journey, this is not a destination.

It’s like riding a bus, there are lots of stops throughout a career. Roger Federer’s bus is still going. If he thought there was a destination, why is he still playing? Why is Rafa playing? Why is Serena still playing? They’ve got everything they need. [But] because it’s a journey and they are all learning, there are always new things to overcome. There are always new ways to create a better pathway to reach your potential. With Taylor, I love reinforcement in a positive way in terms of results, but I am a big believer in sticking to the process that can get you to reaching your potential.

As a big-picture guy, do you have very routine day-to-day tasks that you do with Taylor? What would be a normal training block?
During a training block, he’d normally do an early morning gym session, if you’re not at a tournament. Anywhere from 20-45 minutes, before you get on a court. Then on the court around 90 minutes to three hours, depending on the day, then he is back in the gym. Then we sometimes tag another on-court session on the end of the day, working on something specific like the serve or return of serve. Right now, we’re not worried about it, because there is plenty of time. We’re all working at this as we go through it. There is a very good team around Taylor that, for sure, will maximise the opportunity and the ability that we have in terms of time, to get him to become a better tennis player. 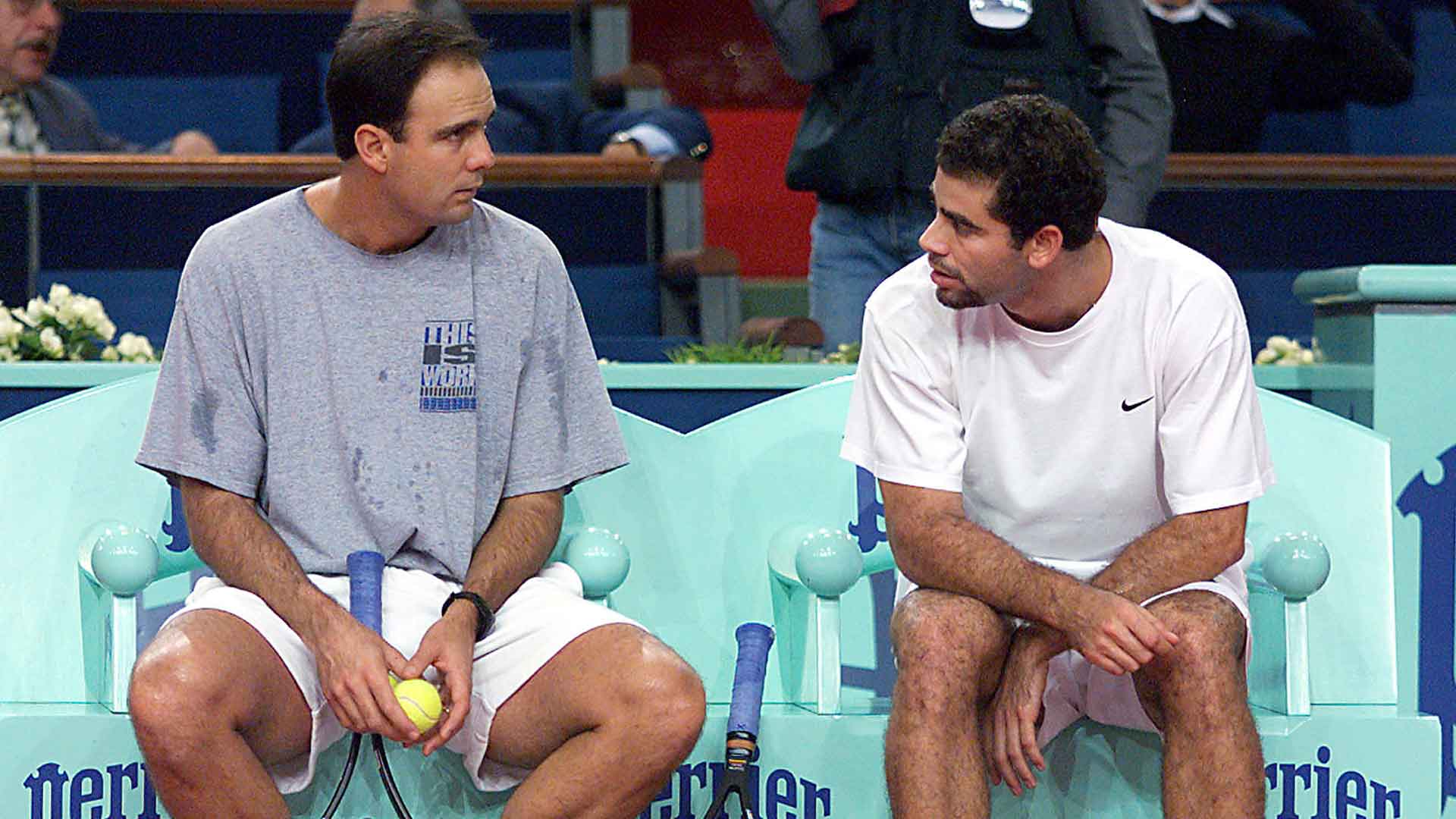 The things you do with Taylor, are they in the same mould as the things you did with Pete Sampras, Roger Federer or Tim Henman? Or do you as a coach like to keep changing things up?
I think you have to move with the times a little bit. You want to use what’s successful, then translate it into a language and into a process that resonates with a different time. My philosophies of training, of practising and coaching have not changed that much, but it’s the ability to adapt and adjust so that they work in 2020 versus 1990 or 2004. You have to be fluid and be aware, but you also have to be aware of the player you’re working with.

Taylor is very different; he is 22 years of age. Roger and Tim were in their late 20s. Pete was 23 when I started working with him, but he was already World No. 2. It’s a different process, but it’s now the ability to build on a process with a 22-year-old Taylor Fritz. He is pretty clear on the fact that he wants to see how good he can be.

As a coach, the biggest challenge is figuring out how to plug in what you want to do and how the player will receive it best. That’s the biggest challenge in individual sports versus opposed team sports. If you think of team philosophies, whether it is European football, or American basketball or football, teams generally conform to a coach’s philosophy. If you’re a successful individual coach, with an professional athlete, you’re going to have a hard time if your philosophy is mono-focused or can only be said one way. Regardless of who the player is, I don’t think it’s necessarily gender, it’s about personalities. 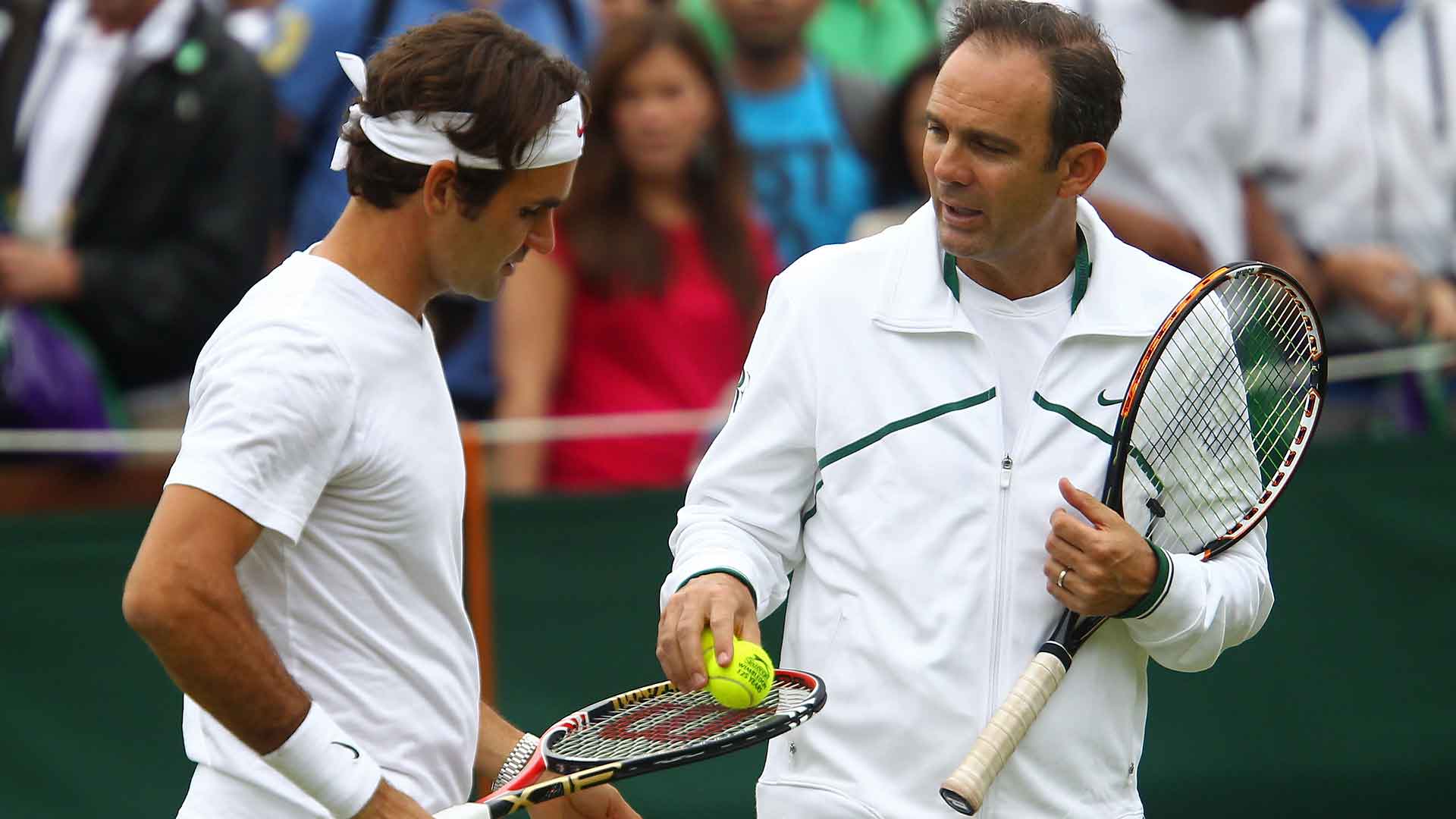 Are there traits that Sampras and Federer shared, that you recognise and now wish to impart on Taylor?
I believe what makes up every human being, and an athlete specially is three categories. Your talent: your athletic talent, your God-given skillset. Then the other categories are your head and your heart. Your head is the ability to process and to problem solve under every pressure. You’re able to think through adversity, you’re able to sort problems out and you’re able to problem solve. Your heart is the ability to compete. Someone like Rafael Nadal is a great person to look at for heart, as no matter what the score is, he’s not giving you one point. He is never going to give in, stop fighting or trying.

For me, the best of the best are the highest in those three categories. They may not be the best in every category, but they resonate pretty highly in all three if they are to consistently get great results. For me, it’s about trying to engrain head and heart, specifically when players are younger, so they it becomes habit for them. If you have that mentality from when you’re young, that’s going to be your normal. Then, the physical stuff becomes easier and you can maximise your talent.

Taking constructive criticism too, presumably that’s all part of being strong in the head? Are there examples of where Federer took something on board?
So much of what you do with an individual athlete is about not wanting to crush their ego. You want them to be able to hold a mirror up and say, ‘Okay, let’s work on this, and a little bit of that. I’m not doing so well here.’ Roger is very self-aware, and because of that, it becomes very easy to coach. You don’t have a lot of convincing to do, as he does that in a pragmatic way, and it doesn’t affect his confidence. That’s one of the reasons why he has been great for so long: he’s comfortable in his own skin. He is also able to be very realistic about what he’s doing well and what he’s not. He problem solves in a way that isn’t smothered or suffocated by emotion. It’s very clear, simplistic.

If you have a player like that, is the player more receptive to taking advice before a match?
Everyone is very different. Roger to Pete and Tim Henman, who was pretty conversational and would talk a lot about plans and strategies. Roger was similar to Tim in that regard. If you thought differently to Roger, you better have been able to prove it to him and explain to him why. Otherwise he wouldn’t buy in as much. Pete wanted to be very concise, with very simple and clear direction. He wanted it done in a way that is unencumbered with a lot of complexity. ‘Here’s what you need to do. Here’s what’s going to happen if you do that.’ Boom, boom, boom, go out and play. So you have to figure out what each player needs and it’s one of the arts of coaching and one of the reasons why I like it so much.