ATPTour.com looks back on Rafael Nadal’s 11 title runs in Barcelona

Rafael Nadal, who first competed at the Barcelona Open Banc Sabadell as a 16-year-old in 2003, has made the Real Club de Tennis Barcelona a second home, winning 11 titles across 15 appearances. Nadal has lost just one set in posting a staggering 11-0 record in Barcelona finals. Three years ago, the centre court was renamed in the Spaniard’s honour as ‘Pista Rafa Nadal. No player has won an ATP 500-level tournament on more occasions.

The Barcelona Open Banc Sabadell was set for this week, but due to the global outbreak of COVID-19, this year’s tournament will not proceed as scheduled.

ATPTour.com breakdown Nadal’s title runs at the famous 121-year-old club, where he has 61-4 record.

2005: The Reign Begins
Just two years after his Barcelona debut, Nadal returned to begin his eight-year reign. Full of confidence after listing his first ATP Masters 1000 crown at the Rolex Monte-Carlo Masters, the 18-year-old beat former champion Juan Carlos Ferrero 6-1, 7-6(4), 6-3 in just under three hours for his first trophy on home soil. “I’m delighted and feel incredibly happy with what has been an amazing two months,” said Nadal, amidst a record 24-match winning streak for a teenager. “It’s brilliant to be ranked number seven in the world as early as April and it’s been a dream come true to win here and in Monte Carlo. It’s been a fantastic two weeks.” With his fourth ATP Tour title of 2005, he moved into the Top 10 of the FedEx ATP Rankings for the first time.

2006: Nadal Moves Past Borg
Down a set and 1-4 against Jarkko Nieminen in the quarter-finals, Nadal looked a long way from retaining his Barcelona title. But fight back he did, and the World No. 2 went on to record a 6-4, 6-4, 6-0 victory against 2004 champion Tommy Robredo in the final. “This was not an easy match for me,” said Nadal. “It’s a dream to keep on winning. Tommy is a tough fighter but I was able to beat him. I’m playing well on clay. I’m working to keep my level. I will need this kind of form in the coming weeks.” Nadal powered his way to a 47th match win on clay courts, surpassing the impressive run of Bjorn Borg in 1979, with only Guillermo Vilas’ 1977 record of 53 consecutive victories in sight. “I think I can reach the record, but I can’t say how long it will take,” said Nadal. 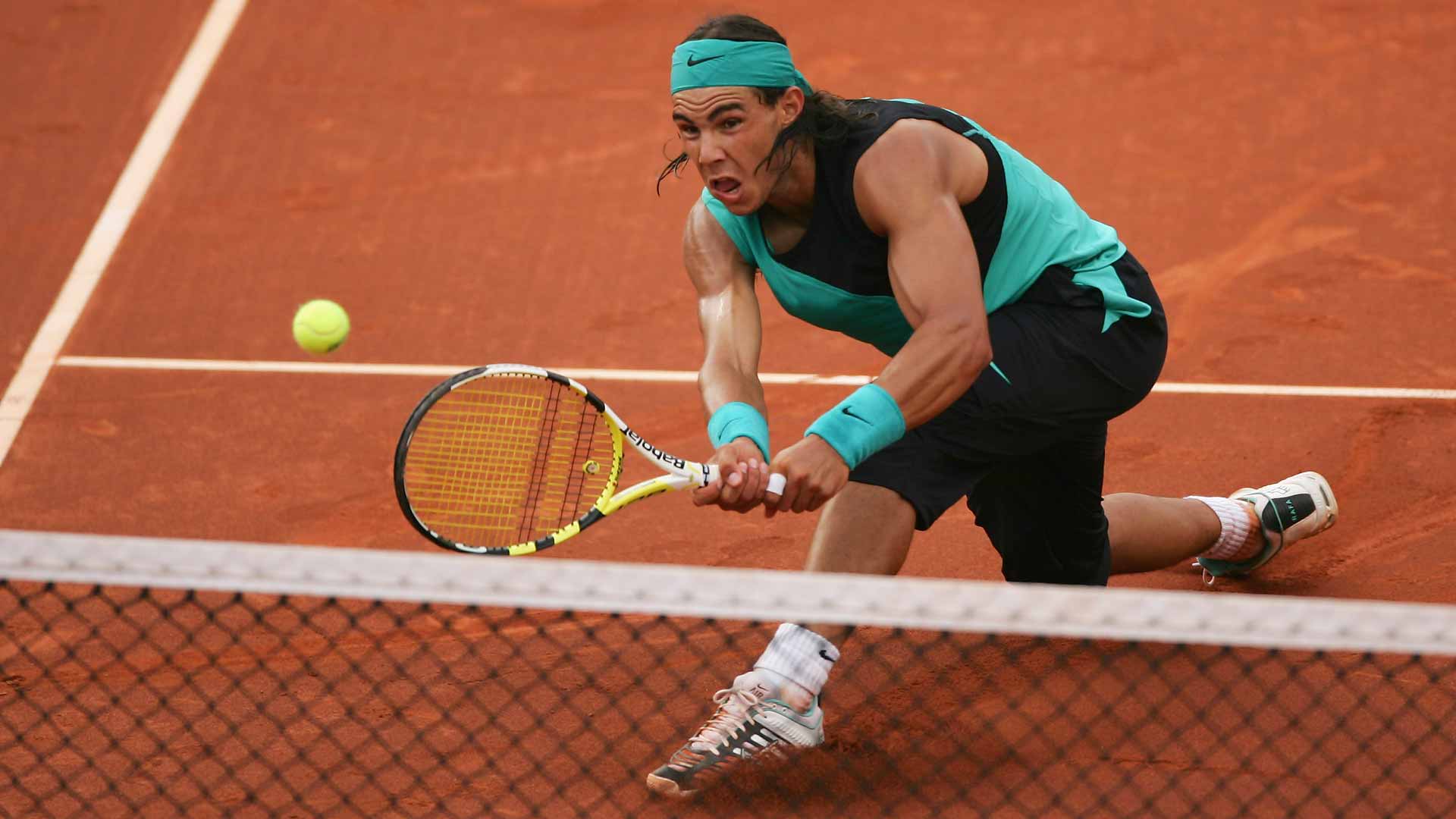 2007: Nadal Matches Wilander With Third Straight Title
The 20-year-old Nadal underlined his status as the foremost clay-court performer with his third Barcelona crown, making the 20th title of his career. The Spaniard did not drop a set all week, beating Guillermo Canas, who’d twice overcome Roger Federer the previous month, 6-3, 6-4. “To win another final, in Barcelona, at home here, it’s a great feeling,” said Nadal. “The first time I won it was like a dream, so what can I say, to win it for a third time, to win my 20th title here, it is an amazing feeling.” As the first player since Mats Wilander to win three successive Barcelona crowns (1982-84), the victory also took his record winning streak on red dirt to 72 matches.

2008: Nadal Hits 25th Career Trophy
Nadal swept into his fourth consecutive Barcelona final without the loss of a set, but came up against stiff resistance from David Ferrer in a 6-1, 4-6, 6-1 victory in two hours and 14 minutes. “The one thing I wanted to do was to not let him dominate early on, but he started so strongly,” said Ferrer. “I think I played a good match but what can you do? That’s Rafa. He has been playing at this level for four years now and you never have a moment to relax against him.” It was the 25th title of Nadal’s career, and afterwards he said, “The first set I played very well, almost perfect, but he was very strong in the second set and I am just very happy to have won here again,” said Nadal. “When I did make mistakes, in the second set, David was unstoppable, but I kept very focused throughout and I am very happy to be the first man to win four years in a row.”

2009: Nadal Beats Ferrer Again
For the second time, Nadal captured the Barcelona trophy without dropping a set, beating Ferrer for the second consecutive year in the final, 6-2, 7-5. “I could have never even imagined that I could win here for the fifth time,” said Nadal, who also beat World No. 8 Nikolay Davydenko in the semi-finals. “For me, this is much more than a dream.”

2011: Nadal Returns For Milestone Win
After missing the 2010 tournament, Nadal returned to the Real Club de Tennis Barcelona and once again did not drop a set. The 24-year-old recorded the 500th match win of his career by beating Ivan Dodig in the semi-finals, becoming the second-youngest to reach the mark behind Borg, who was 23 and seven months. Nadal met World No. 6 Ferrer, who he’d beaten in the Rolex Monte-Carlo Masters final the week before, for the third time in a Barcelona final and completed a 6-2, 6-4 win in one hour and 49 minutes. “It’s incredible to come back here to my tournament after not being able to play last year,” said Nadal. “I am very, very happy for the win. It’s my sixth title here and it’s a huge delight.” 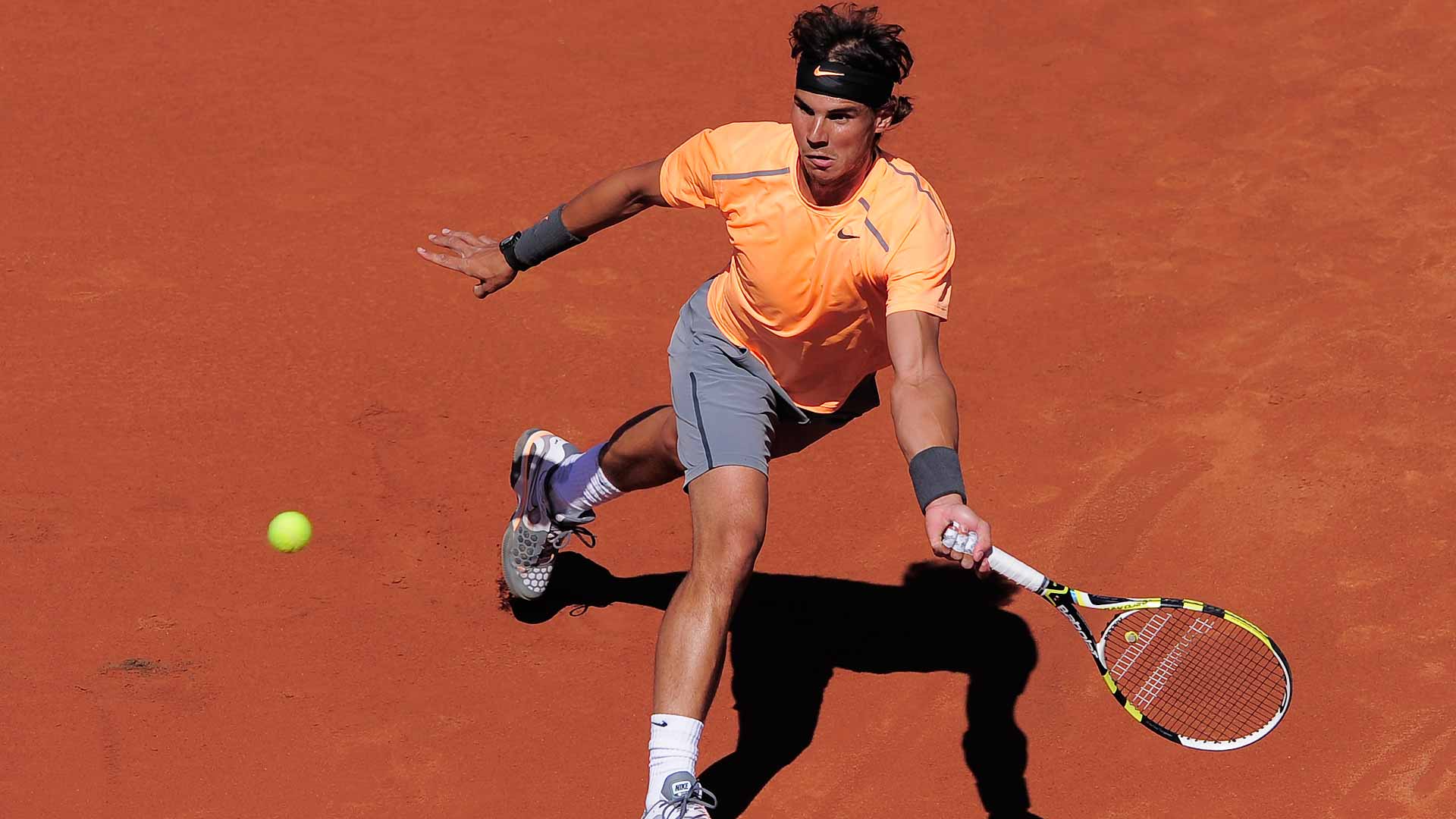 2012: Nadal Hits Another Record
Nadal completed a stunning week to become the first man in the Open Era to capture two ATP Tour events at least seven times (also Monte Carlo). He saved five set points to clinch the first set tie-break in a 7-6(1), 7-5 victory over Ferrer. “This is the hardest match I had on clay courts this season, David always takes you to the limit,” said Nadal. “A bit of it was lottery, luck fell on my side today.” The victory also marked the 10th anniversary of his first match on the main tour. On 29 April 2002, Nadal beat Ramon Delgado 6-4 6-4 in Mallorca.

2013: Nadal Wins Eighth Crown
After losing to Novak Djokovic in the Monte Carlo final, the week before, Nadal recovered from a 0-3 deficit against Nicolas Almagro in wet conditions during the Barcelona final for a 6-4, 6-3 win over one hour and 32 minutes. Almagro had won 37 of his 39 service games to reach the final, but Nadal broke him four times. “I am very happy,” Nadal said. “It has been an important week for me to win here again and a great source of joy after everything I have been through. I didn’t know in 2005 that I would win again or that in 2013 I would still be winning.”

2014, 2016: Almagro Ends Streak, Returns To Winning Ways
Nadal, who had not dropped a set in Barcelona since the 2008 final, suffered a 2-6, 7-6(5), 6-4 loss to Nicolas Almagro in the 2014 quarter-finals, bringing to an end his 41-match winning streak — and run of 44 straight sets — at the tournament. World No. 20 Almagro converted his second match point by hitting a forehand down the line for his first victory over his fellow Spaniard at the 11th attempt. “I had a lot of opportunities in the second set,” said Nadal, who didn’t convert five break points in the set. “I didn’t take advantage of break points, so credit goes to him.” Almagro said, “This is an important win for my career.”

After his earliest Barcelona loss in 12 years to Fabio Fognini in the 2015 third round, Nadal bounced back in style the following year. After avenging his loss to Fognini in the quarter-finals 6-2, 7-6(1), the Spaniard dethroned two-time defending champion Kei Nishikori in a 6-4, 7-5 final victory over two hours and four minutes. In notching his 49th clay-court crown, Nadal drew level with Guillermo Vilas atop the Open Era clay-court titles list.

2017: Nadal Wins La Decima In Barcelona
One week after securing a record 10th Monte Carlo title, Nadal etched his name in the history books once again, lifting a 10th Barcelona trophy with a 6-4, 6-1 win over World No. 5 Dominic Thiem. “I’m very satisfied. It’s been an emotional day for me,” said Nadal. “Playing in front of my crowd and my club and winning a 10th title here is something that’s impossible to even dream of. It’s very special and unique. I played my best match of the tournament this afternoon against probably the toughest opponent in the tournament, so I’m very happy.” He was only broken twice in 47 service games throughout the week.

2018: Nadal Storms To 11th Crown
Twenty-four hours after recording the 400th clay-court win of his career, a 6-4, 6-0 semi-final victory over David Goffin, Nadal stormed past Stefanos Tsitsipas 6-2, 6-1 for his 11th crown. “It’s very difficult to describe how to win 11 titles at one tournament. To win 11 Monte-Carlos and 11 Barcelonas is something I couldn’t imagine doing. I’m just enjoying every week and the fact I’m playing in a tournament that I enjoy so much means a lot to me.” He extended his winning streak on clay to 19 matches and sets-won streak on the surface to 46 in a row. Last year, Nadal saw his 18-match run end at the hands of Dominic Thiem in the semi-finals.