Working overtime on your 21st birthday? It was all worth it for Jannik Sinner.

The Italian was made to dig deep by Thanasi Kokkinakis in the pair’s first-round match at the Western & Southern Open in Cincinnati on Tuesday, but the 10th seed ultimately prevailed 6-7(9), 6-4, 7-6(6) in a marathon three-hour, 15-minute encounter.

“I love to play tennis and doing the thing that you love on your birthday is the best thing you can do,” said Sinner after the match. “Obviously today was a happy ending, so I’m very happy about that.”

Sinner fired 43 winners, 30 of them from his forehand wing, while Kokkinakis struck 35 of his own as their maiden tour-level meeting proved to be an engrossing one. Sinner appeared to have the momentum after twice breaking Kokkinakis’ serve to claim the second set, but the World No. 12 needed a deciding-set tie-break to clinch the win and book a second-round meeting with Pablo Carreno Busta or Miomir Kecmanovic at the ATP Masters 1000 event.

“In the beginning I was not playing so well or feeling the ball so well,” said Sinner. “I tried to be a little bit more aggressive, which I had to do because Thanasi is a very attacking player. Let’s take the positives out of this match, and hopefully in the next round I can play also at a higher level.”

Sinner’s attempts to stay on the front foot are reflected in the INSIGHTS In Attack statistics for the match. The Italian played 29 per cent of his shots from attacking positions, five per cent more than Kokkinakis and six per cent more than the ATP Tour average. 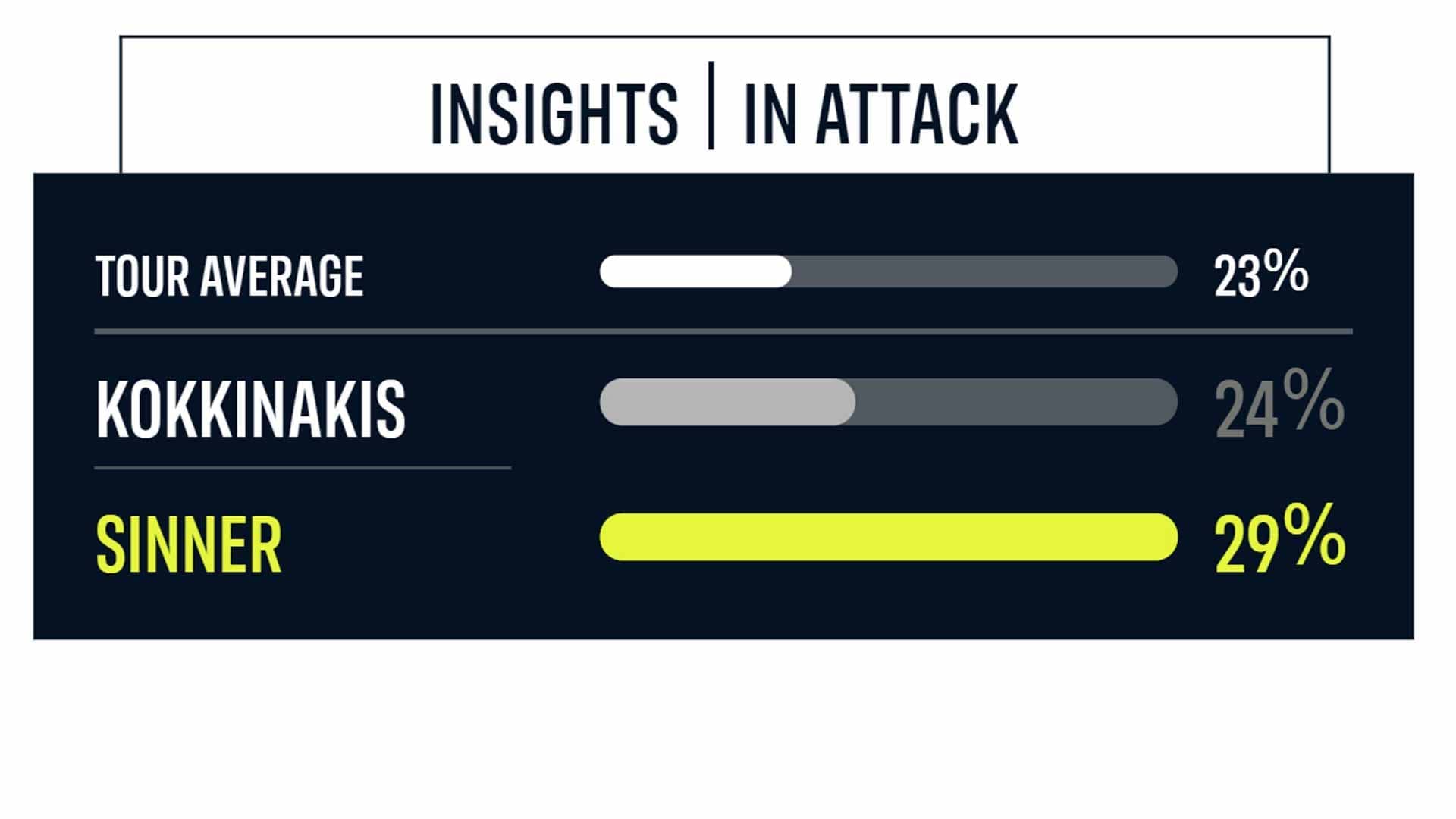 After showing consistent form in 2022, Sinner lifted his first trophy of the year with an impressive championship match win against Carlos Alcaraz in Umag in late July. A six-time tour-level champion, the Italian is chasing his maiden Masters 1000 crown in Cincinnati, where he reached the second round on tournament debut a year ago.

With the win, Sinner improved to a 37-10 record for the season. The 21-year-old is seeking a strong run in Cincinnati to boost his chances of qualifying for November’s Nitto ATP Finals for the first time. Sinner currently sits 15th in the Pepperstone ATP Live Race To Turin.

There was no first-round success for another #NextGenATP Italian, Lorenzo Musetti, in Cincinnati. Borna Coric, a quarter-finalist in 2016, defeated the Hamburg champion Musetti 7-6(2), 6-3 in the pair’s maiden tour-level meeting to set a second-round clash against second seed Rafael Nadal.

Fabio Fognini did succeed in joining his countryman Sinner in the second round, however. The 35-year-old downed Albert Ramos-Vinolas 6-2, 6-3, and he will next face sixth seed Andrey Rublev.