Get to know the latest #NextGenATP Italian star

Francesco Passaro started the season outside the Top 600 in the Pepperstone ATP Rankings. Eleven months on and the Italian arrives at the Intesa Sanpaolo Next Gen ATP Finals at a career-high No. 119.

The 21-year-old is one of three Italians competing at the event and will be aiming to impress on home soil in Milan. Passaro spoke to ATPTour.com ahead of his second Green Group match, sharing his interests and aims.

If you weren’t a tennis player, what job would you want and why?
A football player. When I was younger, I played football and [wanted to be] a professional or to be a manager in sports.

If you could have dinner with three people, who would they be and why?
Roger [Federer] Because he is my idol. I mean, he is the god of tennis. Lionel Messi, because of what he’s done. The third [would be] an actor. To have a different kind of conversation.

Describe your perfect day if you are not playing tennis?
I would be with my family, with my girlfriend and with my friends. I like to watch a TV series, so would watch Peaky Blinders. I would have some dinner out. Maybe go and have a walk. I like also to go shopping in the city. I like fashion.

Who has had the greatest impact on your life and why?
My family and my coach. This year a lot of things have changed now. At the beginning of the year, I was 600 in the world. Now I’m 119. It’s a big change. It is good to have their support.

What is the most interesting thing you have ever got to do in your life?
I had the chance to meet a lot of great people. When I was younger I played football. Doing the things of every younger guy. Also playing video games.

Brandon Nakashima survived a five-set thriller against Italy’s Matteo Arnaldi to earn an opening win on Tuesday in his return to the Intesa Sanpaolo Next Gen ATP Finals. In a battle of 21-year-olds in Milan, the American saved five set points to avoid going two sets down before prevailing 2-4, 4-3(7), 4-3(4), 3-4(4), 4-2.

In a back-and-forth contest in the Green Group, Nakashima let slip a 3-1 lead in the fourth set but regrouped to claim the fifth, closing out the victory in two hours and 10 minutes.

“It kind of took me a little while to get used to the new format, the new conditions out here,” Nakashima said post-match. “Right from the beginning it was a lot of critical points, the sets were going by fast, so I just tried to adapt as quick as possible. The tie-breaks, I was kind of lucky to squeeze them out and today I think it was just all about finding a way out here. He’s a super tough opponent, he was playing really well, and it was just some critical points in the end that helped me get over the line.”

A semi-finalist last year at the Intesa Sanpaolo Next Gen ATP Finals, Nakashima joins Lorenzo Musetti in bidding to become the first player to win the Milan title in his second appearance. The American peaked at No. 43 in the Pepperstone ATP Rankings last month after winning his first ATP Tour title in his home city of San Diego.

It was Arnaldi — a native of Sanremo — who had the home advantage in Milan. 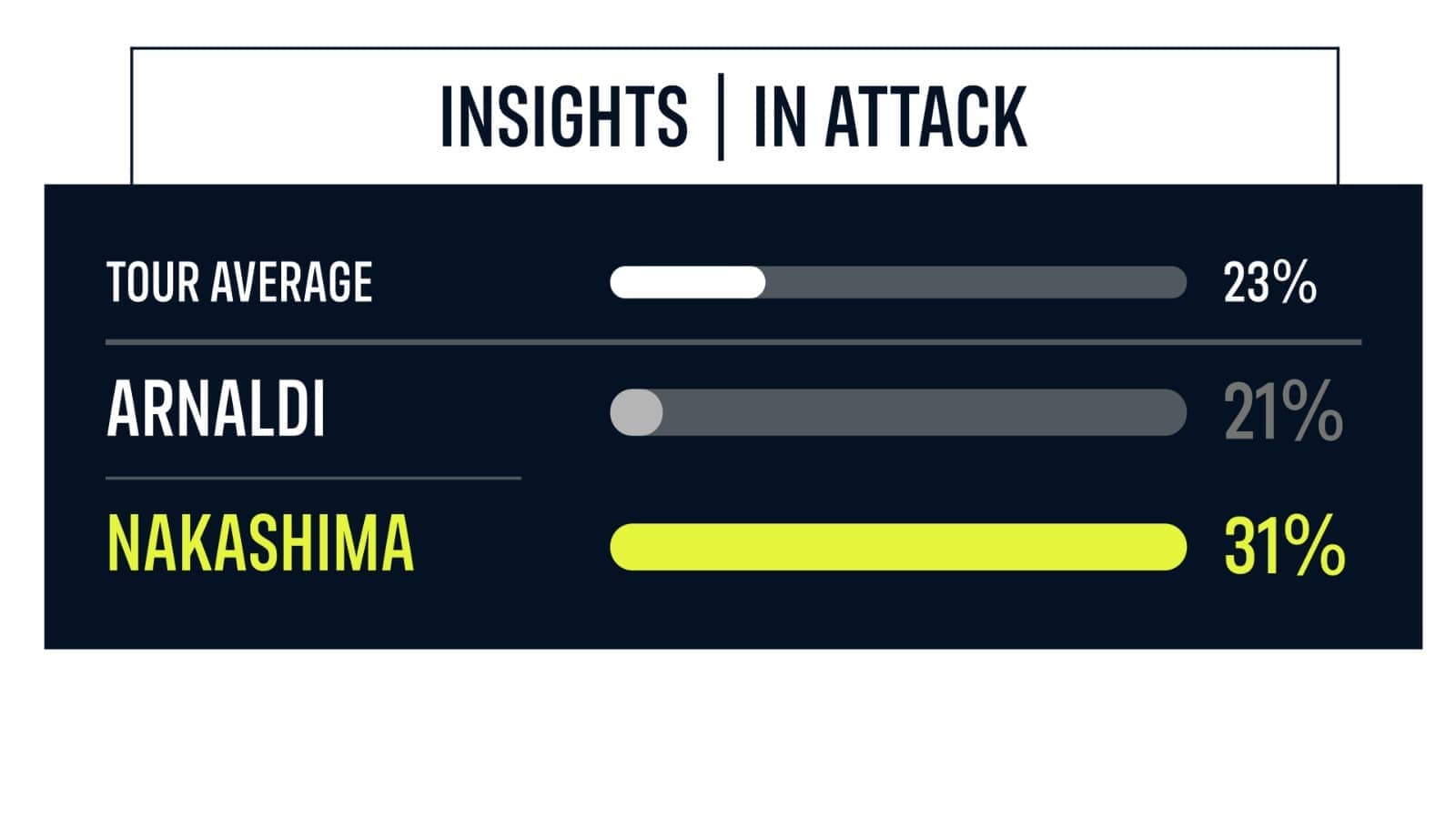 While Arnaldi was the last man into the Milan field, the Italian proved he belonged with an aggressive display against Nakashima. There was no shortage of highlights from the classy Italian, particularly in the early stages as he made a bright start in search of his first tour-level win. Entering the showcase event at a career-high of No. 138 in the Pepperstone ATP Rankings, Arnaldi’s only previous tour-level match came in Rome earlier this season.

Both Nakashima and Arnaldi entertained the Milan crowd with aggressive tennis, combining for 69 winners (Arnaldi 36, Nakashima 33). Only two points separated the competitors overall, with Nakashima winning 98 to Arnaldi’s 96.

The American’s victory takes him to second in the Green Group, with Arnaldi now in third place following the narrow defeat. Nakashima will next face group-leader Jiri Lehecka on Wedneday, while Arnaldi meets fellow Italian Francesco Passaro.

Katie Boulter is unable to rise to the occasion as Great Britain go 1-0 behind in their Billie Jean King Cup Finals group tie against Kazakhstan.

The Intesa Sanpaolo Next Gen ATP Finals spotlights the best 21-and-under tennis players in the world. Popular 35-year-old Italian Fabio Fognini might be more than a decade removed from that classification, but he was thrilled to be at the Allianz Cloud on Tuesday with wife, WTA legend Flavia Pennetta.

“It’s nice. Milan, it’s a really beautiful city,” Fognini said. “For the tennis, especially because we are in Italy, it’s really important for us to have these kind of [Italian] guys who are on the top of the world [playing].”

“It’s always nice. I always say that the more we are, the better it is,” Fognini said. “There are three Italians, Lorenzo [Musetti], [Francesco] Passaro and Matteo [Arnaldi]. It’s really important for us.”

Fognini added that it is key not just to have successful Italian players, but prestigious tournaments in the country to continue encouraging juniors to pick up the sport.

“It’s quite important to have these kind of events because of course you have a chance [for] young guys to play,” Fognini said. “But at the same time [you have] young guys who are on top of the world and they play really well. It’s really, really nice and of course my opinion it’s fantastic. It’s a great event.”

Czech moves to 1-0 in Green Group

Jiri Lehecka celebrated his 21st birthday in style at the Intesa Sanpaolo Next Gen ATP Finals Tuesday when he cruised past Francesco Passaro 4-1, 4-3(7), 4-1 to move to 1-0 in Green Group.

The Czech is making his debut in Milan and made a strong opening statement at the 21-and-under event, quickly adapting to the first-to-four, best-of five set format to triumph after 67 minutes.

“I have never played a match in this format before,” Lehecka said. “In the beginning I was getting used to it a little bit. I think I adapted well. We have used this format in practise and I got used to it pretty fast and it was fun.”

Lehecka pulled Passaro around the court with his consistent groundstrokes, firing 18 winners and breaking serve three times. With just 15 seconds between points following aces or missed returns, he also raced through his service games to earn victory.

The World No. 74 has enjoyed an impressive season. He reached the semi-finals as a qualifier in Rotterdam in February, before he clinched an ATP Challenger Tour crown in August.

Lehecka will also play American Brandon Nakashima and Matteo Arnaldi during the round-robin stage in Milan. Nakashima will face Arnaldi on Tuesday evening in Green Group.

Passaro held a 29-15 record on the ATP Challenger Tour in 2022, lifting a trophy in Trieste.

Jiri Lehecka couldn’t stop smiling when he sat down inside the Allianz Cloud ahead of his debut at the Intesa Sanpaolo Next Gen ATP Finals in Milan.

The Czech qualified for the 21-and-under event last month following an impressive season that saw him reach the semi-finals in Rotterdam and win an ATP Challenger Tour event. Ahead of his opening match in Milan, the 21-year-old Lehecka spoke to ATPTour.com about his interests, dream dinner guests and much more…

If you weren’t a tennis player, what job would you want and why?
I think I would go to business school first. Then I would probably still be in tennis. I would be in the sport as a coach or in a business role within the sport.

If you could have dinner with three people, who would they be and why?
I would choose Michael Jordan. Then I would choose Conor McGregor and probably my grandpa who [passed away].

I think Michael Jordan because of his sporting mentality. What things he was able to sacrifice for the success in what he was doing. McGregor, I would say that with him, I would love to speak about handling the pressure.

Describe your perfect day if you are not playing tennis?
I would probably spend some time with family. With my girlfriend, with my sister and her husband and their kids for sure. The I would see some old friends and then probably one or two games of League of Legends with my coach.

Who has had the greatest impact on your life and why?
My coach, Michael Navratil. He showed me how it is to be a man, how to go after what you really want. How to stay focused. How to become a top tennis player. And then of course my parents, both of them.

What is one thing you want to do in your life?
I would definitely love to drive World Rally Cars. Or the cars going at fast speeds through the forest. I hope this will happen once for me to, to live this experience.

What is one item you can’t travel without and why? If you could live one day as another person, who would you choose and why?
Any kind of book. I think this is a very important thing to have. It is important to read.

If you had to choose between attending a music concert or a sporting event, what would you choose and why?
It depends on the artist and the sporting event. Because if you have the final of the Champions League and at the same moment you have a concert with a big artist it is hard.

I think that big sporting events will have a priority. I was born and raised in a family where we were watching and followed all the sports when I was a kid. I like to support a Czech athlete. The sport could be an NBA game or game seven of the final of NHL would be good.

Have you got a hidden talent and can you tell me a bit about how you got into that?
I think that I can read through people. This I can do pretty well. I’m still exploring myself as well. I am 21, so still have plenty of time to find some hidden talents.

France’s Caroline Garcia claims the biggest singles title of her career with a straight-set win against Aryna Sabalenka in the season-ending WTA Finals in Texas.