The stars of the ATP Tour are used to competing on the tennis court, but not in the way they did on Saturday at the National Bank Open Presented by Rogers.

It was no surprise that the professional hockey players — Huberdeau, Zachary L’Heureux, Marc-Edouard Classic, Jonathan Drouin and Olympic gold medalist in women’s hockey, Melodie Daoust — dominated the action. But there was fun for all involved, especially the tennis players who are hockey fans, like Ruusuvuori.

“I love both. I used to play quite a bit [of hockey] with my friends when I was younger. I love the sport. I still follow and I have a lot of friends playing, also in the NHL. I love both sports and it was really fun today to play with these guys,” Ruusuvuori said. “It was really cool.”

Huberdeau, who was tied for second in the National Hockey League in points last season with 115, is the “Hubi” of the NHL. The Flame even took a photo with the ATP’s “Hubi”, Hurkacz.

“It was a lot of fun. What you guys are doing, it’s a joke. It’s so hard. I’m just struggling to follow somehow the ball,” Hurkacz said. “t’s really amazing.” 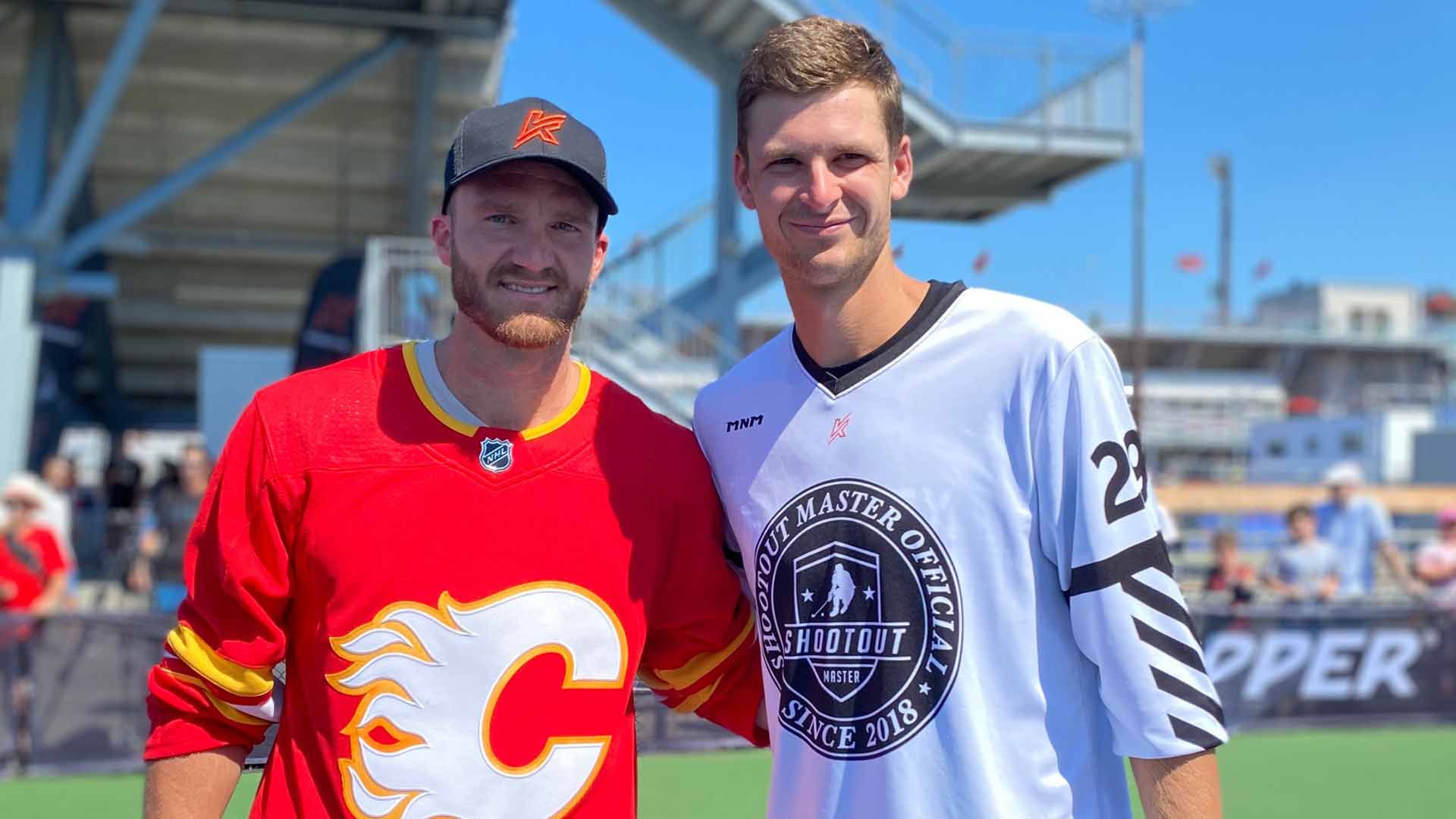 Photo Credit: ATP Tour
“I think these guys are just athletes and they’re talented in every sport, you can tell,” Huberdeau replied. “I’m a big tennis fan. It’s the same thing when you guys play, I think it’s impressive.”

Now, the tennis players will return to their day jobs with the tennis main draw set to begin on Monday.

“I’m definitely better at tennis, but it’s nice to play hockey because I never do it,” Paul said. “This was probably the first time I’ve done it since I was four years old. It wasn’t pretty, but it was fun.”

Cameron Norrie seems to be relishing the role of defending champion.

The Briton moved within one victory of retaining his crown at the Abierto de Tenis Mifel in Los Cabos late on Friday, when he hung tough to secure a 6-4, 3-6, 6-3 semi-final victory against second seed Felix Auger-Aliassime at the ATP 250 event in Mexico.

“Especially winning last year, you want to come out and win the title, but [I’ve just] taken it one match at a time,” said Norrie after clinching his first win over the Canadian in five attempts. “It was a tough task at the beginning of the tournament and I got through a couple of matches.

“ [Against] Felix today it was looking really tough, so I was really pleased with how I handled that today, especially after losing that second set.”

The World No. 12 will now seek his third ATP Tour title of 2022 in a championship match clash with Daniil Medvedev, after the World No. 1 was a 7-6(0), 6-1 winner against Miomir Kecmanovic.

Friday’s win improved Norrie’s record in Los Cabos to 11-2. The Briton reached the semi-finals on tournament debut in 2018 before his run to the title last year, but his latest victory on the western coast of Mexico was anything but straightforward. Auger-Aliassime responded to dropping the first set with a mid-match surge, forcing Norrie to dig deep against an opponent he had never beaten before.

“Every time he just gets me and plays better than me, so I really wanted to win that one more than usual,” said Norrie. “I started off great and then Felix found his level in the second set, so I feel really good to get through that one, especially with the last game when he had a couple of chances to break me. I managed to hold on tight and tough it out.

“It feels great to be in the final, and especially to set up a meeting with the No. 1 in the world in Daniil.”

Norrie stayed alert in return games to capitalise on any opportunities he had against Auger-Aliassime. The defending champion converted three from five break points, despite his opponent racking up 17 aces, to prevail in a two-hour, 19-minute encounter and back up his opening wins against Chun-Hsin Tseng and Radu Albot in Mexico this week.

British number one Cameron Norrie beats Canada’s Felix Auger-Aliassime to reach the final of the Los Cabos Open in Mexico.

Aussie to face Ymer in semi-finals

Two of the ATP Tour’s great entertainers did what they do best on Friday night in the Citi Open quarter-finals. Nick Kyrgios and Frances Tiafoe put on a late-night show in one of the matches of the ATP Tour season, not taking their final bows until just before 1 a.m. local time.

Kyrgios saved five match points in a high-octane second-set tie-break before dominating the final set in a 6-7(5), 7-6(12), 6-2 victory, earning the right to remain in the spotlight as he drew the curtains on local favourite Tiafoe’s run.

Neither man led the crucial second tie-break by more than one point until Kyrgios won the last three to send the match to a decider. The drama of the tie-break — and the match — was matched by its quality, with both competitors putting their shotmaking skills on full display throughout.

The highlight-filled contest included tweeners, drop shots, outrageous gets and unbelievable winners along with dominant serving from both sides of the net.

Kyrgios finished with 60 winners, including 35 aces, and took full advantage of Tiafoe’s dipping first-serve percentage to run away with the final set as he maintained his high level on his own deliveries. Tiafoe played his part with 33 winners, including 14 aces.

The Aussie will next face Sweden’s Mikael Ymer, who survived a stirring comeback attempt from American Sebastian Korda on Friday night. A 6-2, 5-7, 6-3 winner, Ymer let a double-break lead slip at 5-2 in the second set and led 5-1 in the third before closing out the win with his eighth break on his fifth match point.

Daniil Medvedev guaranteed his stay atop the Pepperstone ATP Rankings until at least the end of the US Open by reaching the final at the Abierto de Tenis Mifel on Saturday night in Los Cabos.

In his second stint as World No. 1, Medvedev advanced to his fourth final of the season with a 7-6(0), 6-1 win against fourth seed Miomir Kecmanovic. He will face defending champion Cameron Norrie in Saturday’s final as he seeks his first title of 2022.

“Very tough match,” Medvedev said in his on-court interview. “He started great and all the first set was a great level. So many tough points, so many points where I felt like I was close to getting the edge. The tie-break was great.”

Kecmanovic came out firing and held a 4-1 lead after saving the first break point against him. The Serbian was fully comfortable in his third semi-final of the year, and he showed it with an array of drop shots, including a three-shot combo in which he casually hit a drop shot, a volley lob and a drop volley to frustrate his opponent.

But Medvedev began to find his groove midway though the opening set, settling in with his metronomic baseline brilliance as he began to control the rallies. He was at his scrambling best early in the tie-break, following up strong defense with a flicked backhand pass as he asked for more noise from the Mexican crowd.

“I’m not the kind of guy to ask [for the crowd to cheer] like this,” he said with a laugh. “I made a great point, so I thought, ‘This one was good, let’s try to pump it up a little bit.'”

After racing through the shutout tie-break, he stayed on the attack to build a 3-0 lead in the second set. He secured a second break late in the set as Kecmanovic began to fade, then hit two well-placed volleys on match point to seal the victory.

Medvedev improved to 2-0 in his ATPHead2Head against the Serbian, backing up his Roland Garros third-round win in May. He also prevailed in his only previous tour-level meeting with his final opponent Norrie, a straight-sets win at the Rolex Shanghai Masters in 2019. The Briton moved within one win of defending his Los Cabos crown with a 6-4, 3-6, 6-3 semi-final victory against second seed Felix Auger-Aliassime.

If you’re a ballkid in need, you best hope you’re working a Shang Juncheng match.

Fans at the Lexington ATP Challenger Tour event this week witnessed a wonderful act of sportsmanship by the world No. 344 Chinese player. The 17-year-old and American Stefan Dostanic were locked in a three-set battle in scorching temperatures in the American state of Kentucky when Shang noticed a ballkid, Atharva Dang, in distress.

What an act of sportsmanship 👏

In Lexington, 🇨🇳 Juncheng Shang noticed a ball kid was not feeling well & was there to help him get some rest

After asking Atharva if he was okay, Shang exclaimed, “He’s going to faint!” Immediately, Shang set his racquet down and assisted the overheated boy, lifting him into his arms and rushing him behind the umpire’s chair and out of the direct sunlight. After setting him down in the shade, Shang gave a bottle of water to Atharva and placed an ice-pack behind his head.

“I turned around to ask for the ball. When the ballkid gave me the ball, he looked like he was unable to stand,” Shang said. “I asked him, ‘How are you?’ and he said, ‘I don’t feel good.’ He staggered over and I felt like he was going to faint right away. I just did everything I could do with my gut feeling,” the teenager recalled.

Wu Yibing Ready To Get Back In The Fast Lane

Since that moment of sportsmanship, all is well for both Shang and the Atharva. They reunited for a picture the following day and Dang competed in a local tournament on Friday. Shang has advanced to the semi-finals in Lexington, becoming the youngest player to reach a Challenger semi-final since Carlos Alcaraz at Alicante in 2020.

“I remember everything,” Atharva said. “I remember giving him the ball and then he asked me if I was OK. I then remember him dropping his racquet and helping me over to the side where they gave me ice.”

In Saturday’s semi-finals, Shang will play World No. 229 American Aleksandar Kovacevic, who two weeks ago held, but could not convert, six championship points against another Chinese player, Wu Yibing, in the Challenger Tour final in Indianapolis.