Hubi's Huge Upside: 'Everything Is On The Table'

Hubi’s Huge Upside: ‘Everything Is On The Table’

The Polish No. 1 competed in the 2018 Next Gen ATP Finals in Milan

Hubert Hurkacz has enjoyed a relatively smooth ascent up the FedEx ATP Rankings. This week two years ago, the Polish star had not yet cracked the world’s Top 200, and he is already up to World No. 29.

There are some players who make significant changes on and off the court, leading to a surge in their level. But Craig Boynton, his coach, says Hurkacz doesn’t need to make major adjustments; he simply needs to keep plugging away.

What will it take for him to make the next jump?

“A wise man told me one time to go from No. 30 to No. 20, you don’t have to create something, you just have to do what you do, but do it a little better,” Boynton said. “You just have… to get a little better, keep working to improve some things. There’s no big on-off switch on off, he’s in a great spot, and I’m really looking forward to seeing him continue to improve.”

With that said, there is always work to be done.

At last year’s Rolex Shanghai Masters, Hurkacz lost in a final-set tie-break against then-World No. 7 Stefanos Tsitsipas. Hurkacz won only 26 per cent of his return points in the match.

“He did everything great, but he didn’t return well at all,” Boynton said. “If he had returned a little bit better, he would have won that.

Boynton began coaching Hurkacz at last year’s BNP Paribas Open, where the Pole won three consecutive three-setters against Top 30 opponents to make his first ATP Masters 1000 quarter-final. But it didn’t take him long to notice things he wanted to, at some point, address.

“I just felt that his returning style could get better if we changed a few things,” Boynton said. “I delicately mentioned it to him throughout the year, as I just wanted him to be familiar with the idea.”

The issue had nothing to do with Hurkacz’s receptiveness, which Boynton effusively praised. But even as Hurkacz earned more victories and continued his climb, there simply wasn’t time to zone in on more granular parts of his game.

“In the off-season you generally have more time and you can be a lot more specific, and you can dedicate a nice block of time to a couple specific things,” Boynton said. “When you’re going to a tournament, basically the first couple things you’ve got to figure out are the conditions. What’s going to be the string tension? What are the balls this week? How are the courts playing?

This past off-season, Hurkacz spent nearly five weeks with Boynton at Saddlebrook Tennis Academy in Florida. That gave the team plenty of time to do just that.

“It was great. Hubi and I got to know each other through tournaments, so there were a lot of things that I saw that I wanted to address when the climate was slower, when we were able to have that training block where we could really work on things for a week at a time and talk about different concepts, different ways of seeing the court,” Boynton said. “You can’t do that at tournaments, because the last thing you want is to confuse your player. That time at home in Saddlebrook was invaluable.”

World No. 16 looks to inspire next generation of Canadian tennis players

When Denis Shapovalov first picked up a racquet at age five, it was because he wanted to be like his older brother. The #NextGenATP Candian now hopes to provide that same inspiration for kids in his country.

The 20-year-old currently sits at No. 16 in the FedEx ATP Rankings, just three spots away from the career-high standing that he achieved in January. But while Shapovalov takes pride in his on-court accomplishments, he’s equally proud of achieving them on his own terms. His home-grown success has served as a template for other Canadians that they don’t need to relocate in order to pursue their dreams of a professional tennis career.

“I want to use my game to inspire more kids that are going their own way, that aren’t supported, and show that it’s possible to do it on your own if you truly believe and work hard,” Shapovalov said to ATP Uncovered presented by Peugeot. “Hopefully it can inspire the young generation of Canada to pick up racquets and believe that they can become tennis players [while] living and training in Canada.”

Tennis runs in Shapovalov’s family. His mother, Tessa, competed on the Russian national tennis team and played professionally during the 1990s. She went on to become a coach at the Richmond Hill Country Club in Toronto and coached his older brother, Evgeniy. The younger Shapovalov would tag along for training sessions and eventually made his way onto the court.

”When he was working with my mom, I would try to run on court [and] disturb, try to hit the balls. For the first bit of time, it was fine because I was swinging and missing,” Shapovalov said. “Soon after, I started to disturb the practice too much and my mom said it was time to start [playing] if I wanted.”

Shapovalov’s love for the sport was immediate and his family was willing to do whatever it took to nurture his talent. When it became difficult for him to get adequate court time at Richmond Hill, Tessa left her job there to open her own tennis academy.

The bold move paid off. Shapovalov won his first ITF Junior title at age 14 and, three years later, lifted the boys’ singles trophy at 2016 Wimbledon. He would pick up his first ATP Tour win just weeks later by ousting Nick Kyrgios in front of friends and family in Toronto. 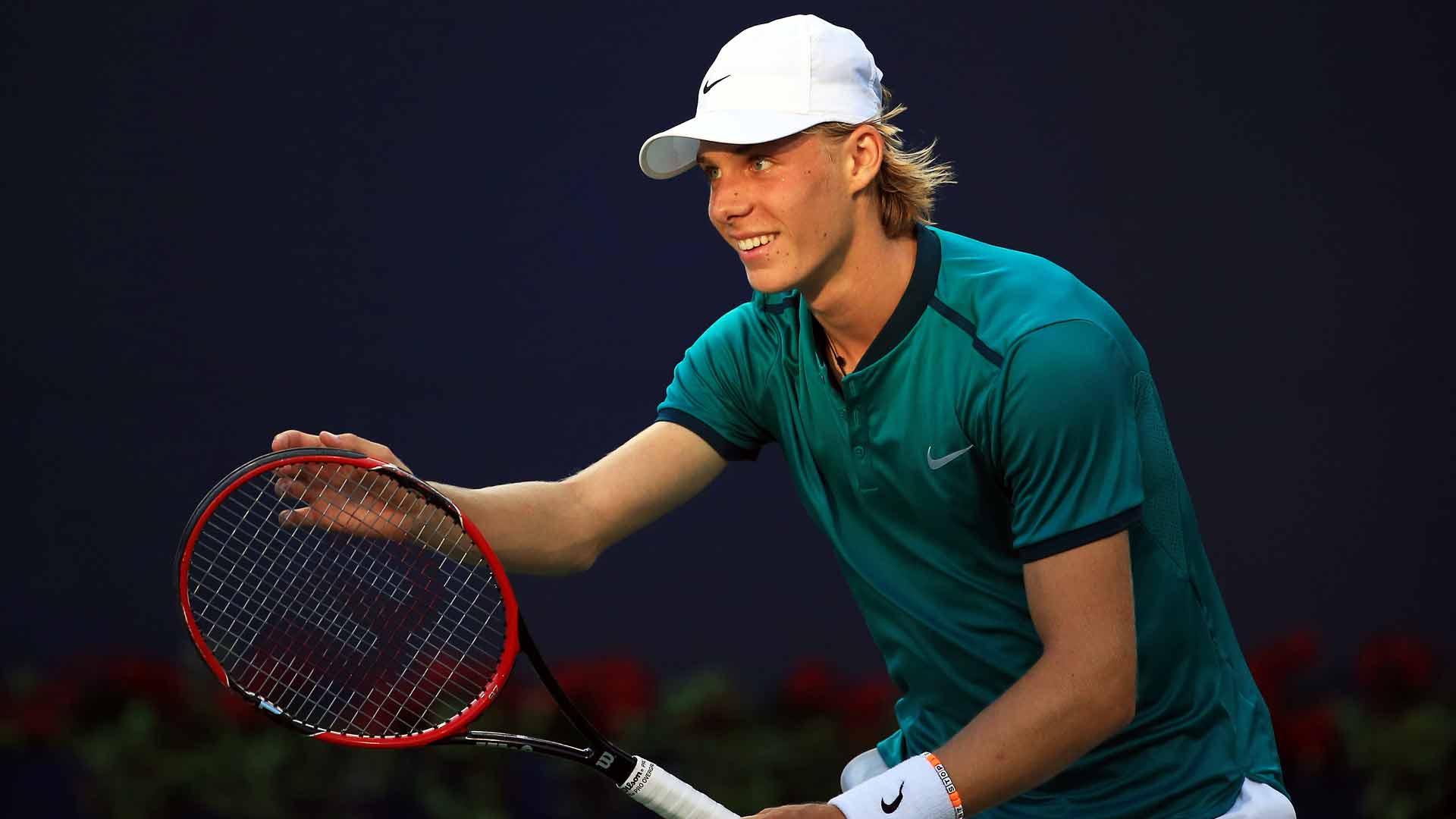 But Shapovalov acknowledged that his results didn’t come without enormous sacrifices. While his friends would hang out after school, his world was consumed by training. The cost of traveling to elite junior events also put a financial strain on his family.

”Growing up, I wasn’t a normal kid,” he said. “I remember waking up at 5:00 or 6:00am to practise before school, training at 10:00 or 11:00pm, trying to get better, improving something, crying on the court and just putting in everything I had.

”My parents and my team put in so much effort because we came from our own way. We didn’t get any support so we had to put in all the effort, all the money, everything, We were questioning what we should do because we got to a certain point where I was traveling and we couldn’t afford to go to more tournaments. But I always believed in myself and my family believed in me.”

That unwavering belief and willingness to take risks has been evident as he’s made his rapid climb up the rankings. After enduring a string of early exits in the middle of last season, Shapovalov started working with former World No. 8 Mikhail Youzhny in mid-August. He made small tweaks to his game at Youzhny’s urging, such as incorporating backhand slices into his game to get more returns into play, and saw immediate results from it.

Read More: Shapovalov On His Surge: ‘I Knew It Was Just A Question Of Time’

Shapovalov finished the year on a 21-10 run that included his maiden ATP Tour title in Stockholm (d. Krajinovic) and first ATP Masters 1000 final in Paris (l. to Djokovic). He then opened this season with a pair of Top 10 wins against Stefanos Tsitsipas and Alexander Zverev while leading Team Canada at the inaugural ATP Cup.

After enduring plenty of stressful moments around tennis, Shapovalov is now playing without pressure. Being able to swing freely has played a key role in his rapid climb up the rankings and will only yield more strong results in the future.

”When I wake up, my only purpose is to get better and improve something. I’m trying to grow as a player and a person. I want to enjoy where I am in my career,” Shapovalov said. “I don’t have to worry about finances anymore or what I’m going to do if I don’t win this match. Just have fun out there and show the world my game.”

The Artistry Of Benoit Paire: 'Sometimes It Works, Sometimes Not'

The Artistry Of Benoit Paire: ‘Sometimes It Works, Sometimes Not’

Learn more about the Frenchman’s mindset

There are few players like Benoit Paire on the ATP Tour. From forward-facing half-volley tweeners as he rushes the net to drop volleys with incredible touch, the Frenchman has talent oozing from his pores.

“That’s why I play tennis: to have fun on court, to enjoy, to try some hot shots,” Paire told ATP Uncovered presented by Peugeot.

Entering last season, he owned only one ATP Tour trophy and a 47.7 career tour-level winning percentage (180-197). But the Frenchman enjoyed one of the best years of his career in 2019, triumphing in Marrakech and Lyon.

“It was a long season, very good for me, two titles. Since this tournament in Marrakech with confidence, with everything, we were able to make a good season,” Paire said. “Then a new title in Lyon, so honestly for me it was a very good season.”

Paire’s peers respect the Frenchman’s abilities. Not only does he have sensational feel, but a lethal two-handed backhand. Those weapons helped him climb as high as No. 18 in the FedEx ATP Rankings in 2016. He is currently World No. 22.

“I think he’s great. He’s even better than he thinks he is,” said Gael Monfils, Paire’s countryman. “I think last year, to get back in great shape and win a lot of matches and actually two titles, I think it was a great achievement.”

Paire’s journey goes back to when he began playing tennis at six. His father used to work at a club next to their home. At that time, professional tennis was far away.

“I watched tennis on TV growing up, and I thought it would be incredible just to one day play one match at this level,” Paire told ATPTour.com after winning his first ATP Tour trophy at 2015 Bastad.

That came after one of the most devastating blows of Paire’s career. On 17 September 2014, he underwent left knee surgery and missed the rest of the season. In his second tournament back the following January, he dropped down to the Futures level.

Knowing the difficulties of dealing with an injury, Paire put his tennis in perspective.

“It’s very important to enjoy when everything is fine on court. It’s never easy to play tennis for four, five years in a row,” Paire said. “After my surgery, in 2015, I had to work a lot to think about what to do to enjoy more on court, to be more calm, and that’s what I did.”

When Paire won that first title, it only ignited his hunger.

“It’s good to win one tournament,” Paire said at the time. “But I want to win more and make more finals.”

Paire has won two titles and reached three finals since. While his shot selection — choosing a tweener half-volley rather than a conventional one — might sometimes seem misguided, it’s that fun nature of the Frenchman’s game that helps him play his best and endears him to fans.

The 30-year-old, who made this year’s Auckland final, is playing some of his best tennis ever. When he’s at his top level, Paire is as entertaining as anyone.

“Benoit brings a lot to the game. He’s talented. He has a personality, and we need it,” said former World No. 8 Sebastien Grosjean. “As a player, he has a strong personality. I think he’s great.”